Baltimore can have a rail transit system that accommodates light-rail and streetcar vehicles on the same lines, if not always in the same places, to take advantage of the best of both.

Modern streetcars and light-rail vehicles have evolved to become practically one and the same. The conflicts and confusion between them arise only because of their design flexibility.

State transportation planners has abused that flexibility in an effort to cram the Red Line into places where it just doesn’t belong and can’t work well. But the same flexibility could be used to integrate light-rail and streetcar systems to work well and affordably together, tailoring them to their specific environments.

Why the Red Line Fails

The proposed Red Line fails because the three-mile-long tunnel from West Baltimore to Boston Street through downtown will consume so much money – $1.2 billion and rising – that it puts the whole project out of reach.

To deal with the extraordinary cost of the tunnel, Maryland Transit Administration planners have shrunk the station platforms to handle only two-car trains. This despite higher projected ridership than the Baltimore Metro carries on its six-car subway trains.

The Red Line route – from Woodlawn in Baltimore County to the Johns Hopkins Bayview Campus – is far too slow for a regional system. Regardless of how prospective riders react to its less than 20-mph average speed, the lengthy 45 minute end-to-end travel time with only two-car trains would result in very poor productivity. Feeding bus routes into the line would have very limited benefit.

As presently designed, the Red Line is an expensive, slow, low-capacity “money pit” that is also facing citizen opposition in Canton and elsewhere.

Harbor East developer John Paterakis has gone on record as opposing a station at Central Avenue, which would serve his development and Harbor Point, the adjoining office-apartment complex set to receive $107 million in city TIF financing bonds.

Across town, the two stations that were going to serve the University of Maryland’s downtown campus and Medical Center – at Lombard and Greene streets and Martin Luther King Blvd. at Lexington – have had to be eliminated due to cost and engineering problems with the tunnel.

Adding Streetcars to the Mix

Streetcars are the solution. Not only are they far less expensive and more convenient than light rail, but because using surface streetcars for a portion of the Red Line corridor can enable the rest of the line to be built in a far more effective and integrated way – and at a far more reasonable price.

These segments can overlap for greater connectivity and flexibility, since streetcars can be accommodated virtually anywhere (with some adjustments to its overhead electrical system and car-body design). 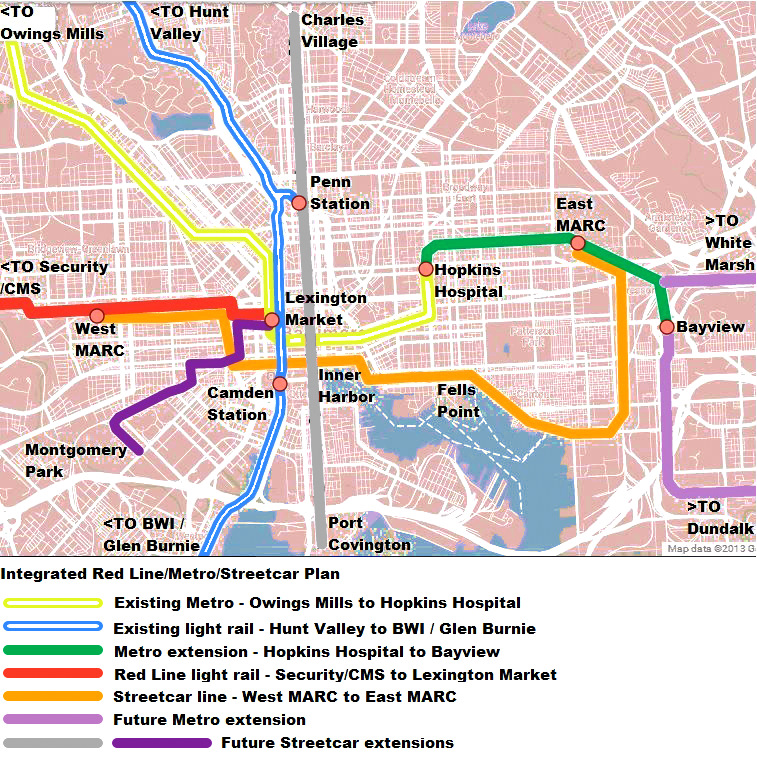 The potential for streetcars in the Red Line corridor should have been clearly suggested when the Draft Environmental Impact Statement/Alternatives Analysis by the MTA concluded that the all-surface option had by far the highest cost effectiveness.

Streetcars were not studied but would cost even less than the all-surface option, since they don’t need the kind of dedicated right-of-way which has worked so poorly on Howard Street. Inexplicably, the MTA rejected the surface option despite its numerical superiority in favor of the tunnel option.

Here’s how a combined light rail/streetcar Red Line could work: The west leg of the Red Line from downtown to Woodlawn, serving the Social Security complex and the Security Square shopping mall, should be designed to accommodate the longest light-rail trains possible, at least three cars, rather than the two-car trains currently proposed.

This west leg constitutes the longest portion of the line, where peak capacity and economies of scale are critical. Accommodating three-car trains (or perhaps four shorter cars) should pose no problem as long as they don’t need to go into the currently proposed downtown tunnel with its expensive underground stations.

Surface streetcars should be used through downtown and the southeast waterfront from the Inner Harbor to Harbor East, Fells Point and Canton.

That will enable the line to fit in well with the existing 19th century streetscape environments of the waterfront and allow stations to be located as close to the most active areas as possible without unseemly disruption. John Paterakis should be far more pleased if his station is nestled along an existing sidewalk near the heart of Harbor East.

Providing additional stations would also become feasible. Harbor East and Central Avenue (the gateway to Harbor Point) should each have separate stations. The Inner Harbor could easily have separate stations adjacent to Harborplace, the Aquarium, and Piers 5 and 6 – rather than just one station hidden 70 feet underneath Lombard Street.

The Greene Street station serving the University of Maryland Medical Center could then be restored.

Streetcar service could go as far west as operationally viable, but a logical terminus would be the West Baltimore MARC station, which has long been touted as an important destination for downtown Red Line trips. Streetcar and light-rail service would thus overlap between there and downtown.

As for how best to terminate west leg light-rail service, many options and factors should be weighed, but here is one very clearly beneficial way to go:

A short light-rail spur can be built along Saratoga Street from MLK Blvd. directly into the Lexington Market Metro station mezzanine, terminating with a two-block tunnel from Greene to Eutaw Street.

Saratoga is very wide and has a nice hill just west of Greene Street where a tunnel portal can be tucked in. The MTA says that running a new transit line into the Metro itself is infeasible, despite being proposed since the 1960s. But adding a Red Line “west wing” to the Lexington Market station is the next best thing – and far better than the proposed two-block long pedestrian passageway.

Another surface Red Line station on Saratoga for UMB and the redeveloped Metro West complex could also easily be provided near Pine Street.

The Lexington Market station could be enhanced to transform it into the comprehensive downtown transit hub the visionaries have been dreaming about for decades.

A short escalator connection from the mezzanine could lead directly up to the Howard Street light-rail line, and the adjacent existing MTA employee parking lot on Eutaw Street could be converted into a bus transfer hub.

The biggest advantage of this set-up, however, is that it would maximize use of the underutilized Metro, which is by far Baltimore’s fastest, most efficient, and highest capacity transit mode, and provide a far more efficient eastward backbone connection for the Red Line than the proposed expensive Red Line tunnel. 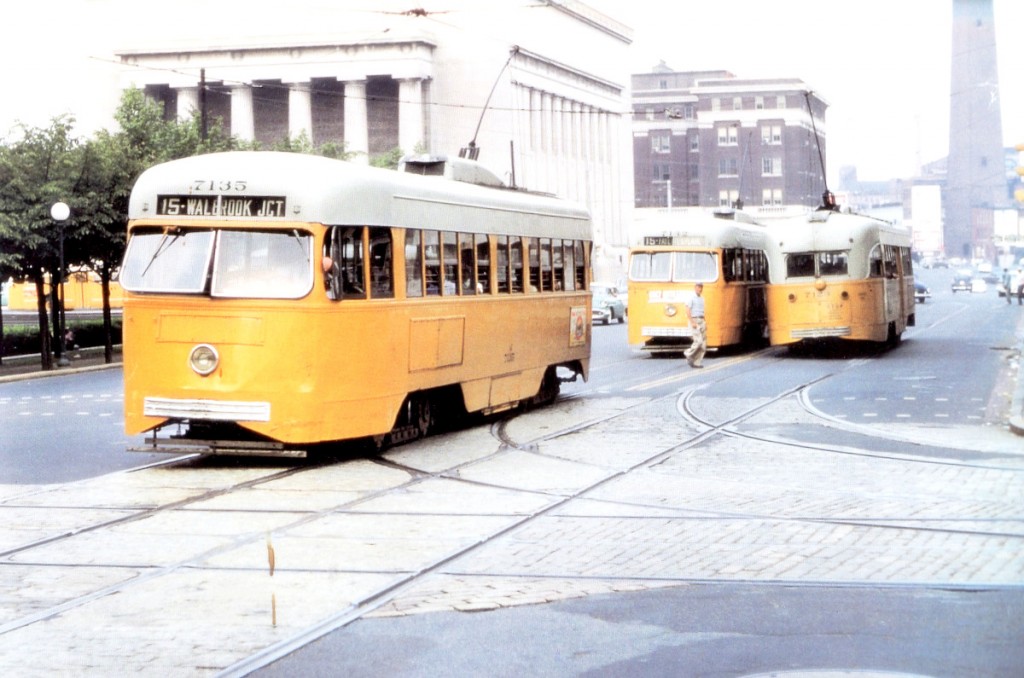 Trolleys congregate at the War Memorial Plaza near City Hall in 1959, part of the city’s once extensive surface streetcar system. (E.E. Reutter Collection)

Accordingly, building a short eastward Metro extension from Johns Hopkins Hospital to Hopkins Bayview along the Amtrak right of way (there’s plenty of room on the south side) would be the ideal complement to this plan.

The route should include a comprehensive bus/rail/streetcar transit hub, with a MARC commuter rail station at Edison Highway near Monument Street. This is a far better location for a MARC-Red Line connection than the present isolated site  inside the Norfolk Southern freight rail yard at Bayview.

Even more importantly, the Edison Highway site would have a far larger rider “catchment area” encompassing most of east and northeast Baltimore and Baltimore County, enabling a far more efficient feeder bus network.

Another huge advantage of a Metro extension is that it could easily accommodate future branches to White Marsh, Dundalk, Middle River and other places.

The extended Metro would instantly become the “Hopkins Corridor,” with a six-minute ride reinforcing the strong synergy between the two health campuses, and stations for East Baltimore Development’s Biotech Park and the MARC station to Washington in between.

An integrated light rail/streetcar/Metro system would provide far superior transit for less than the $2.6 billion pricetag of the MTA Red Line.

It could be built in as many phases as the funding flow allows, unlike the Red Line that can only be built in one unaffordable $2.6 billion chunk in order to conform to its cost effectiveness claim.

This system would provide tremendous service flexibility, such as:

(And not to mention a Lexington Market connection to the Howard Street light-rail line for north-south travel, and potential streetcar lines along Charles Street, the southwest Mount Clare corridor and other places.)

By adopting an integrated approach, Baltimore could have the true rail transit system it has wanted for decades and would follow the innovative systems now being built in places like Los Angeles, Portland, San Francisco and neighboring Washington, D.C.
______________
Gerald Neily, a transportation planner for the Baltimore City Department of Planning from 1977 to 1996, is a consultant. He has performed pro-bono work for Right Rail Coalition that is seeking alternatives to the Red Line’s route through Canton.