The new meters will employ technology that better records low-flow water usage by households, a key to charging more per customer. “By measuring every single drip every time” with smart meters, one manufacturer brags, a water utility can increase its revenues even when rates remain the same.

According to Dynis LLC – the front runner of the yet-unannounced meter award despite a bid $100 million more than its competitor – its Sensus iPERL meters are calibrated to measure as little as 1/32 gallon per minute of flow, a rate eight times lower that the typical mechanical water meter.

Dynis says this attribute will allow measurement of low-flow usage to increase “by 10 percent, at a minimum,” adding $22.98 a year to an average user’s bill at the current water rate. Over the 20-year life expectancy of the meters, Dynis promises the city $160 million in added revenues.

The group’s figures are based on the current water rate. Given the sharp rate increases enacted in July by the Board of Estimates, a typical city customer will pay closer to $40 a year when the new meters go into full operation in 2018 – and the city will gain an equivalent jump in revenues.

Another factor likely to cause “sticker shock” to homeowners is that when old meters malfunction, they tend to “slow down” – or under record the true flow of water. Very rarely do meters speed up. In cities where smart meters have been installed, consumers often find immediate spikes in their bills.

On the other hand, whether the new technology will produce bills that are less prone to error is open to question.

Currently, meter readers (the city employs 39 of them) go house by house, open the meter lid and read the dial. The readings are then recorded on a hand-held device. When asked about inaccurate water bills, Mayor Rawlings-Blake laid blame on the reading of the old meters.

“Once the meter read gets to the billing department, the process is smooth, so now it is making sure that the meter reading is accurate. That’s why we’re focused on and moving forward with trying to get more accurate meters across the city . . . [because] so many of these meters are so old,” the mayor said at a press availability last Wednesday.
________________________________

FULL COVERAGE IN THE BREW:

The smart meter will use a radio transmitter attached to the meter to send signals to a collection unit or cell tower, which will transmit the information to a central office. Software will then read the data and store it in a new Meter Data Management System (MDMS).

Glitches Around the Country

The city is calling on hourly meter readings for all meters across the city – or 9.8 million reads per day. These readings will be stored for seven years and made available to city personnel and consumers (who will need to purchase software to fully access the information).

Critically, though, the MDMS data will have to interface with the Finance Department’s billing system in order to generate bills. The merging of the new technology to a “legacy” billing system frequently results in erroneous billings. 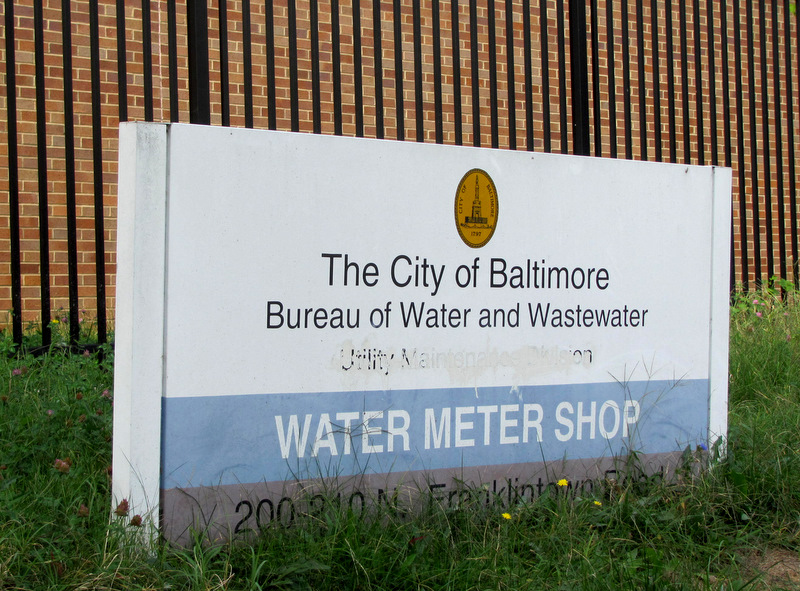 Baltimore has 201,000 meter customers, with another 203,000 in the county. City meters are serviced at this shop in West Baltimore. (Photo by Mark Reutter)

The Rawlings-Blake administration says that a new billing system will be installed by the time the smart meters are operating.

But detailed planning has not yet gotten underway and money could run short, leaving the city with a hybrid system subject to computer errors.

Just such glitches plagued the installation of 800,000 smart meters in New York two years ago.

Public Advocate Bill de Blasio received hundreds of complaints from consumers. He issued a report that ripped into what he called a too-hasty rollout of the system and the difficulties faced by customers seeking redress to what they considered to be inaccurate bills.

“One of the most outrageous things is that if you wanted to challenge your water bill, you have to pay the city $180 to have your automated meter checked by a human being,” de Blasio said. The high-tech system presented a “classic’Catch-22” where customers were forced to choose between a high water bill or an equally high price to appeal.

“Proof of Concept” After Contract Award

In the meter contract under review by the Rawlings-Blake administration – there are two bids, by Dynis for $185 million, and by Itron for $84 million – there is little leeway for technical errors. Unlike some major contracts, the city has not run a pilot program to evaluate the feasibility of smart meters.

Instead, the winning bidder is required to undertake a “proof of concept” test as its first order of business. The contract calls for the vendor (either Dynis or Itron) to install 5,000 meters and transmitters in downtown Baltimore, and another 5,000 meters in Bowleys Quarter in Baltimore County.

If 100% of the readings from the new meters are “successfully passed” to the city’s billing system over a 30-day test period, the city will authorize the smart meter project to proceed.