Maryland now has one of the highest arrest rates for marijuana in the nation and the rate in Baltimore City is the highest of any jurisdiction in the state, according to a new report by the American Civil Liberties Union of Maryland.

The study, which used FBI and U.S. Census data to analyze marijuana arrests between 2001 and 2010, also found significant racial disparities.

Even though blacks and whites use marijuana at comparable rates, police arrest blacks for marijuana at higher rates than whites in every county in Maryland, according to the 24-page report.

“The War on Marijuana in Maryland in Black and White,” produced as part of a nationwide campaign by the ACLU, reaches a policy conclusion as well, calling on government to “end mass criminalization and over-incarceration of communities of color.” 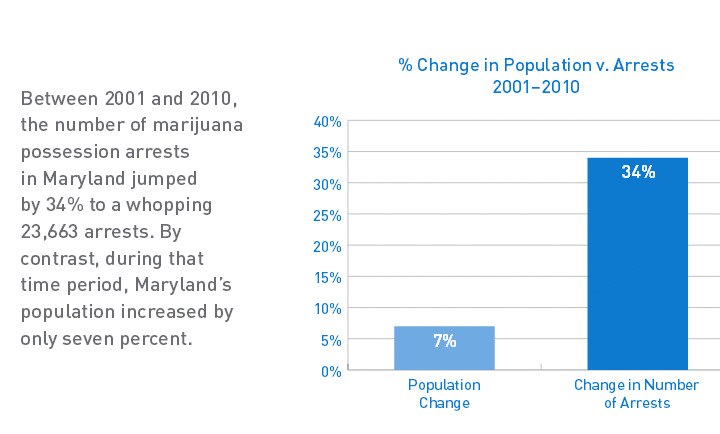 “Our obsession with criminalization and arrests for marijuana possession has come at the expense of true safety and appropriate substance abuse treatment,” says the report, written primarily by staff attorney Sonia Kumar.

“Rather than making us safer, the War on Drugs has corroded the relationship between minority communities and police and wreaked havoc in those communities by treating people innocent of any wrongdoing as suspicious based only on their race. It has criminalized large swaths of the population.”

• Between 2001 and 2010, the number of arrests for marijuana possession in Maryland increased by 34%. During that time, Maryland’s population increased by 7%.

• Police arrest blacks at higher rates than whites in every Maryland jurisdiction. The rate in Baltimore – 11.4 per 1,000 – is higher than in any other jurisdiction. (The rates in Worcester County are technically higher but are skewed by the influx of summer visitors to Ocean City, the authors say.)

The authors of the report, underwritten in part by The Abell Foundation, argue that the rising rate of possession arrests is contributing to the increase in the state’s jail and prison population.

“Since 1971, the number of human beings incarcerated in state-run lockdown institutions in Maryland has ballooned from 4,950 to 22,500. More than 70% are black. Nearly half are there for nonviolent offense,” they write.

Noting that polling shows 54% of Maryland residents support legalizing, taxing and regulating marijuana, the authors call on state policy to move in that direction.

The report recommends the following:

• Join other states that have chosen to legalize, tax, and regulate marijuana.

• Treat marijuana use as a public health issue, rather than a criminal justice issue, in order to address concerns about substance abuse without criminalizing people.

• Get local officials, police chiefs and prosecutors to agree to make enforcing marijuana possession laws among their lowest priorities.

• Law enforcement should combat racial profiling and eliminate incentives for improper stops, searches, and arrests. Ensure that officers understand the law, track and report how police conduct stops and searches, take corrective action when stops and searches are conducted improperly.

The report also includes anecdotal accounts of Maryland residents who say they were targeted for harassment by police hoping to find evidence of marijuana.

A college student from the Eastern Shore, Chaz Slaughter, describes driving back to his Eastern Shore college with classmates when they were stopped by police who claimed they smelled marijuana.

“My classmates and I were forced to sit in the wet grass by the side of the road for nearly an hour while they ransacked the car,” he says. “The officers found nothing because there was nothing to find.”