One of the customers had come knowing only that it was to be a fish-fry featuring tilapia raised by Baltimore City Public School students. So he was a little surprised to arrive at Belvedere Square on Saturday to find a table staffed with students selling . . . hand-crafted soap?

“Hey, you need the soap, to wash your hands after you eat the fish!” said Green Street Academy 9th grader Andrew Jackson, thinking quickly and making a $10 sale.

The customer came away with three big, white bricks of student-made soap (scented with student-grown  basil) and headed over to the next table for a fried-fish sandwich dressed with creamy remoulade.

The event was aimed at raising money for the nearly four-year-old, sustainability-themed city school and showcasing some of their projects.

Shoo-Fly Diner fried up the student-raised fish, adding some sauce and slaw. (Photo by Fern Shen)

The students were, in a way, selling the West Baltimore school as well.

Jackson said he has enjoyed soap-making and all the classroom and after-school projects at Green Street.

Asked why he’d agreed to come to the new middle-high school, he recalled how a representative visiting his elementary school had promised an entirely new school where “we would do something different every day.”

“He wasn’t lying – we do,” Jackson said with a smile. So how long exactly has he been attending Green Street?

“Since the sixth grade,” he said. “Ever since we started it.”

Members of The Fish Club

David L. Warnock wasn’t surprised to hear the 14-year-old talking as if he were a founder.

“This is what happens when you really give kids ownership of their learning and pride in their school,” said Warnock, who actually is a co-founder of the school, with Edward E. Cozzolino and Lawrence M. Rivitz.

There were plenty of adults on hand to explain GSA’s various projects but the students, in their spring-green school neckties, were pretty eager to do it themselves. 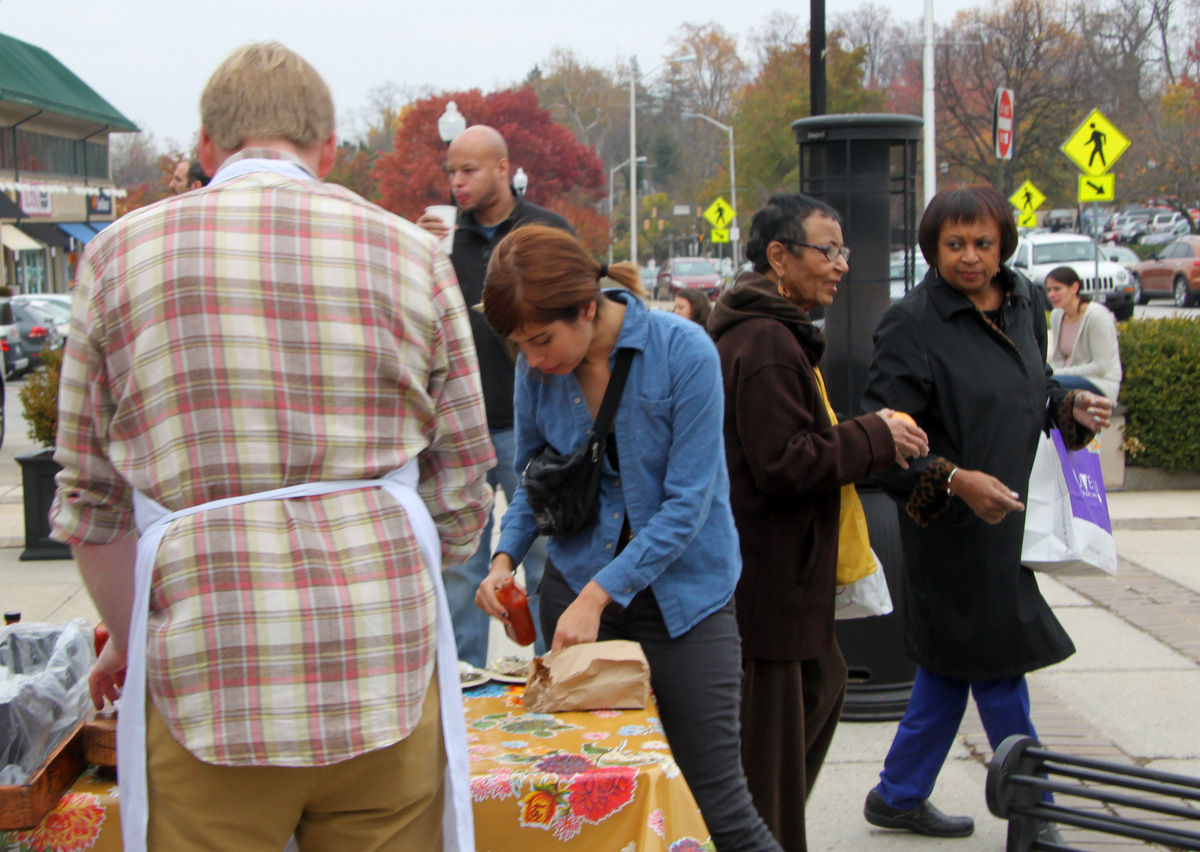 Students sold fish sandwiches and basil-scented soap made at Green Street Academy with all proceeds going to the school. (Photo by Fern Shen)

Antonio Walker, for instance, a member of The Fish Club, talked about what it’s like to care for, and monitor the growth of, the fish the students have been raising in the school basement.

There are two tanks each with 150 to 200 fish. “A mechanical feeder sits on top of the tank and every few hours it drops in the food,” he said.

On Mondays and Wednesdays after school, students weigh the fish (they have been weighing in at about a pound or a little less) – a process that can be pretty lively.

“They start splashing as soon as we take off the net,” added the 7th grader. “I think they’re trying to jump out. We usually feed them after we weigh them.”

What about the fish waste?

“Their poop we use for our garden to fertilize the plants,” he said, explaining that it is drained from the tank automatically through an attached hose leading out to the hoop house area.

Proceeds from the soap sales and the fish sandwiches (chefs from Shoo-Fly Diner helped make them) will go back into the infrastructure of the fish farm and the hoop-house garden.

Dan Schochor, Green Street’s executive director, said they are hoping to increase the capacity of these student-run enterprises.

The aquaculture and agriculture, Schochor said, fit with the school’s mission to prepare students for college and careers by serving as “hands-on classrooms,” instructing children in core subjects like math and science “while pushing them to be creative in their problem-solving and interpersonal skill development.”

(The city School Board earlier this year approved Green Street’s application to become a charter school.)

He filled in a few details on the fish farming and the soap making.

The fish take about six months to mature. The soap takes more like four to six weeks to cure and the process can be tricky (“timing is everything”) and involves some serious chemicals, like lye (“we had all the kids really stand back for that part.”)

Why soap? The project basically fell into their laps because someone donated the materials.

Mostly, though, Schochor just wanted to boast a bit about how much their students accomplished working down in the basement and in a small ninth-grade classroom “They really got into it – they really believe in it.” 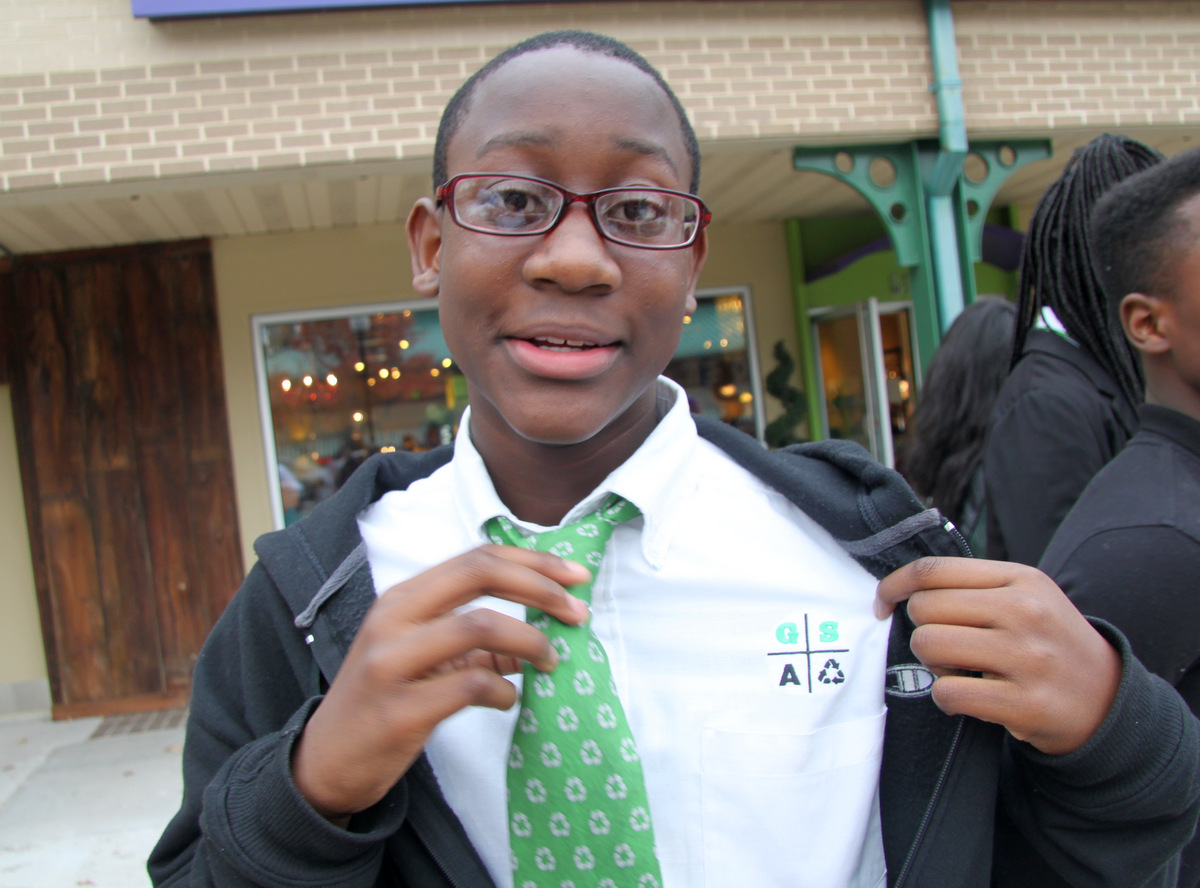 Then he too was off to chat with some other fish fry guests who wanted to hear about Green Street’s plans.

(They’re hoping to be able to move in 2016 to larger space in the former Gwynns Falls Middle School building on North Hilton Street. The Kingdom Life Church is currently located there.)

“Where we are now, most students are taking two buses to get there,” he said. “If we move, more than 60% of our current student body could walk to the school.”

The environmental-themed school’s emphasis on project-based learning and preparing for 21st century career paths means the students have a wide variety of activities.

Along with tree-planting, aquaculture and growing produce in the hoop house, they also promote recycling at Baltimore Ravens home games.

Compared to tending carrots and lettuce plants, Walker said, going into the tailgating area can be challenging: “I get a little nervous.” Why?

“You don’t know what they’re going to say to you,” he explained, describing his  routine.

“I say my name and where I go to school and why I’m there,” he said. “I encourage them to recycle and give them the recycling bag and I tell them the things they can recycle.” 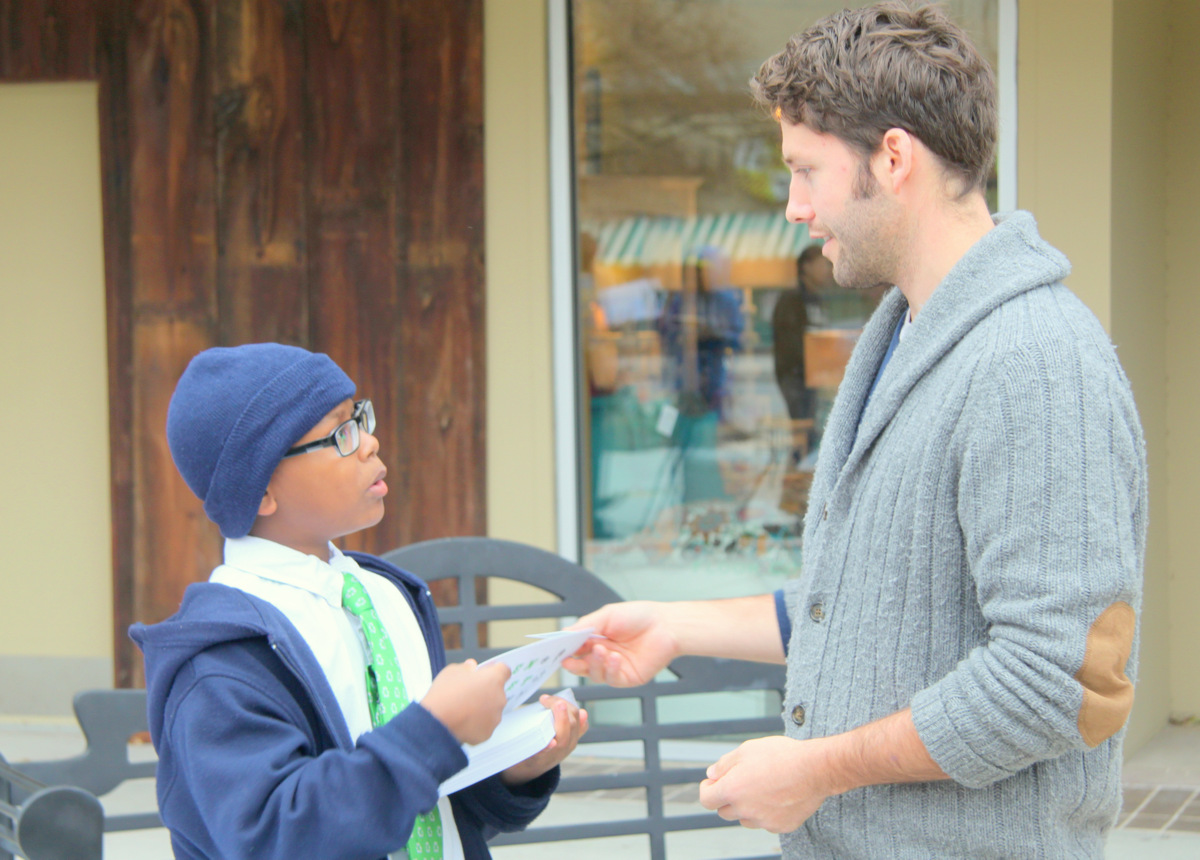 Seventh-grader Antonio Walker handed out information about the school. (Photo by Fern Shen)

So, what kind of reaction do the children get from the tailgaters?

“Sometimes they don’t be rude,” he said.

But Walker is philosophical about it. He explained that the Ravens organization picks up the recycling bags after the game, so the students never know how much the tailgaters are following their advice.