Something happened underneath West Baltimore yesterday that transportation experts have worried about for decades.

A passenger train derailed in a tunnel used by more than 20,000 Amtrak and MARC passengers a day. The southbound Silver Meteor came to a sudden, jolting halt at 7 p.m in the Baltimore & Potomac Tunnel built shortly after the Civil War.

According to preliminary reports, the lead wheels of the locomotive had left the track, but all of the cars, carrying 158 passengers on the Miami-bound train, stayed upright on the rails.

A Lucky Set of Circumstances

No fire broke out from the damaged locomotive. More critically, no train was passing on the adjacent track, which could have sideswiped the disabled Silver Meteor and left passengers stuck in a smoke-filled and debris-strewn tunnel with no discernible escape route. (That’s more than a remote possibility when as many as 10 Amtrak and MARC trains go through the tunnel each hour.)

In short, Amtrak – and Baltimore – dodged a bullet.

On July 18, 2001, the city wasn’t so fortunate. A CSX freight train using the “other” ancient rail tunnel running through Baltimore (opened in 1895) jumped the tracks under Howard Street.

Days of chaos followed as an intense fire caused by chemicals and pulpwood carried on the train burned out of control. The fire cracked open a major water main, closed Oriole Park at Camden Yards and caused heavy damage to the Light Rail line on Howard Street.

Since that “catastrophic event,” the city has prepared itself much better for a disaster at either the Howard or B&P Tunnel. The Mayor’s Office of Emergency Management was notified by Amtrak of the derailment at 7:45 last night and sent fire equipment to the scene, according to mayoral spokesperson Caron Brace.

“BCFD quickly cleared the incident and, as there were no injuries or ongoing hazard, personnel left the scene in the hands of Amtrak,” Brace reported today, adding that the city, Amtrak and CSX use the Incident Command System to manage potentially serious rail accidents. 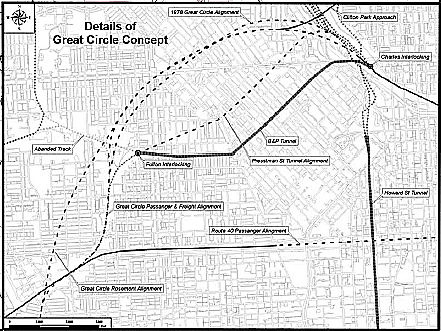 But what the city hasn’t yet accomplished is getting nearer to a solution to its obsolete rail infrastructure.

On an economic level, the failure of the tunnels to accommodate modern double-stack container trains has placed Baltimore at a competitive disadvantage to other cities (Philadelphia, New York and Worchester/Boston) who have managed to finance the enlargement of rail tunnels serving their ports.

This inadequacy will become apparent as super-container ships using the expanded Panana Canal choose which ports of call to use on the East Coast after 2015.

As it happens, Mayor Stephanie Rawlings-Blake is touring the Panama Canal project today, hawking its importance for job creation and port expansion in Baltimore.

Arguably, the mayor would be better advised to inspect her city’s own rail tunnels whose condition has been pinpointed by experts as substandard.

A Hundred Years of Plans

As early as 1915, the Pennsylvania Railroad sought to build a replacement to the 1.7-mile B&P Tunnel or reroute its entire right-of-way through Baltimore on an elevated line along Pratt Street. The latter proposal was vetoed by the city, but the Pennsy acquired the right-of-way for a new tunnel along Presstman Street just before the Great Depression.

Amtrak inherited the right-of-way when its acquired the Northeast Corridor and still owns the tunneling rights. A 1978 engineering study by the passenger railroad found the tunnel to be an operational mess – trains couldn’t safely travel through it at speeds over 30 mph.

Water was seeping from its roof and from weep holes in the tunnel sides. Drain pipes installed under the tracks to remove the water were clogged and water stood in open trenches between the rails.

The tunnel’s curvature, especially at Pennsylvania Avenue, where the tunnel turns sharply west to follow Winchester Street, ruled out any kind of high-speed service.

In 1981-82, track conditions nearly shut down the tunnel. Repairs to the lining, improved drainage and a major rebuild of the track structure allowed rail service to continue.

That was 30 years ago. There have been no major improvements to the tunnel since then as city, state, federal and Amtrak officials have gone through the motions of planning a new tunnel, only to conclude that there was no money available to do so.

Thus, the tens of thousands of people who go through the tunnel every weekday – to be joined by weekend patrons as MARC establishes Saturday and Sunday service next month between Baltimore and Washington – are entering the most hazardous piece of railroading along Amtrak’s entire 457-mile Northeast Corridor.

Accidents will happen, Elvis Costello reminds us. But accidents ought not to happen inside a structure that’s been identified as dangerous for decades – and that possesses no adequate escape routes for trapped passengers and crew.

Last night’s accident was a wake-up call. Is anyone listening?