There were some definite constituent zones in the Planning Commission meeting room jammed with more than 100 people for a public hearing yesterday on the 25th Street Station project:

In the front rows were several of the city’s most prominent lawyers and lobbyists, representing WV Urban Development and Wal-Mart, the retail giant anchoring the North Baltimore project.

Meanwhile the back rows were dominated by the two dozen people from Remington who had come on a bus paid for by Wal-Mart. They held signs that said, “Don’t Block Jobs” and “I still want a Wal-Mart.” 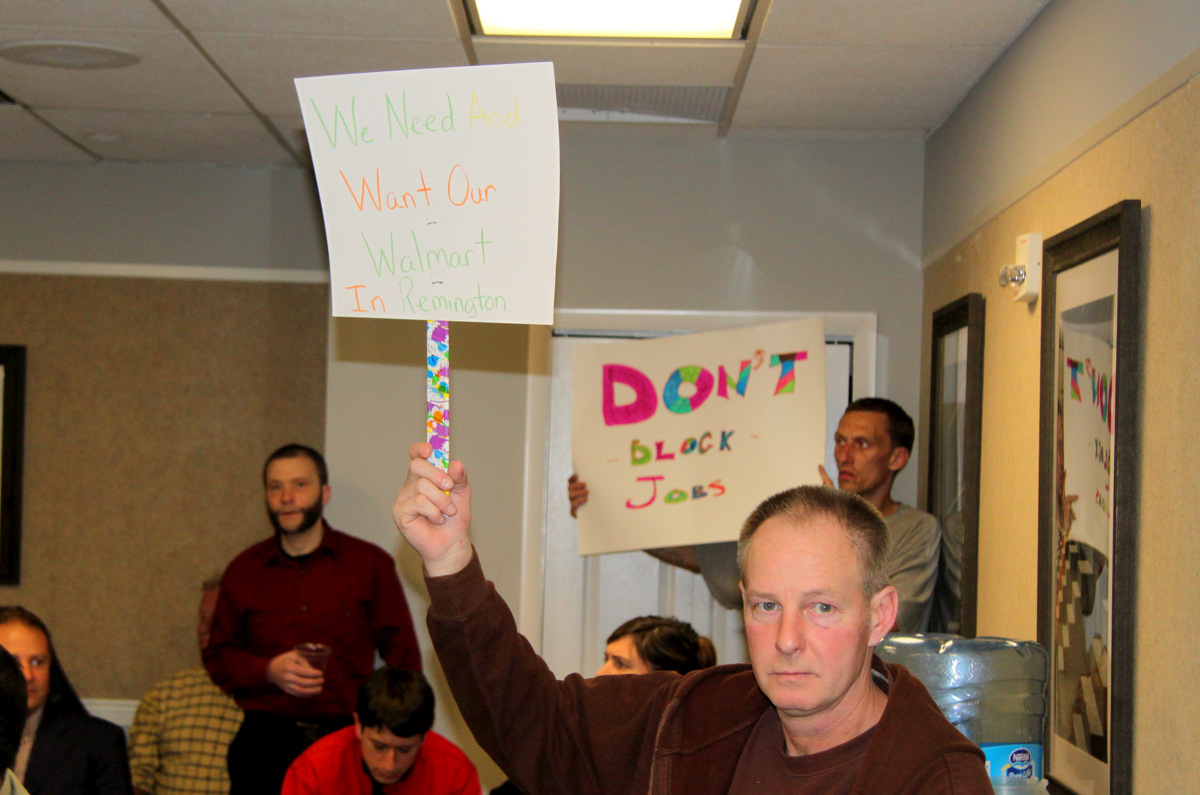 Some of the audience members calling for the Commission to advance the Wal-Mart project. (Photo by Fern Shen)

Confirmation that the  bus was paid for by Wal-Mart came from the company’s community affairs director, Nina King, in the back of the room with them. Hovering nearby was Jamie Fontaine, a grassroots advocacy and public affairs consultant hired by Wal-Mart, who said she has been “working with the community.”

At the end of three hours of testimony, both groups of Wal-Mart supporters got what they wanted – the Planning Commission voted unanimously to move the project forward.

The vote by nine commission members (one member recused himself because of a conflict of interest) cleared away what appears to be the last major hurdle for a project that has been stalled since 2010.

The issue before the Commission was whether to regard the changes made to the 11-acre project since its approval three years ago by the City Council as a “major” or “minor” amendment to the 25th Street PUD (Planned Unit Development).

If major, the project would have to go back to the City Council for approval; if minor, it could sail ahead on the nod of the commission.

Speakers asking the city to slow down the development to consider changes they regard as major said repeatedly yesterday, “It’s not about Wal-Mart.” They want to improve the project, they said, not kill it.

One of them was Megan Hamilton, of West 23rd Street, who said she welcomes the development as potentially “wonderful,” but that more work needs to be done on the design because the community will be “very profoundly affected by it.” 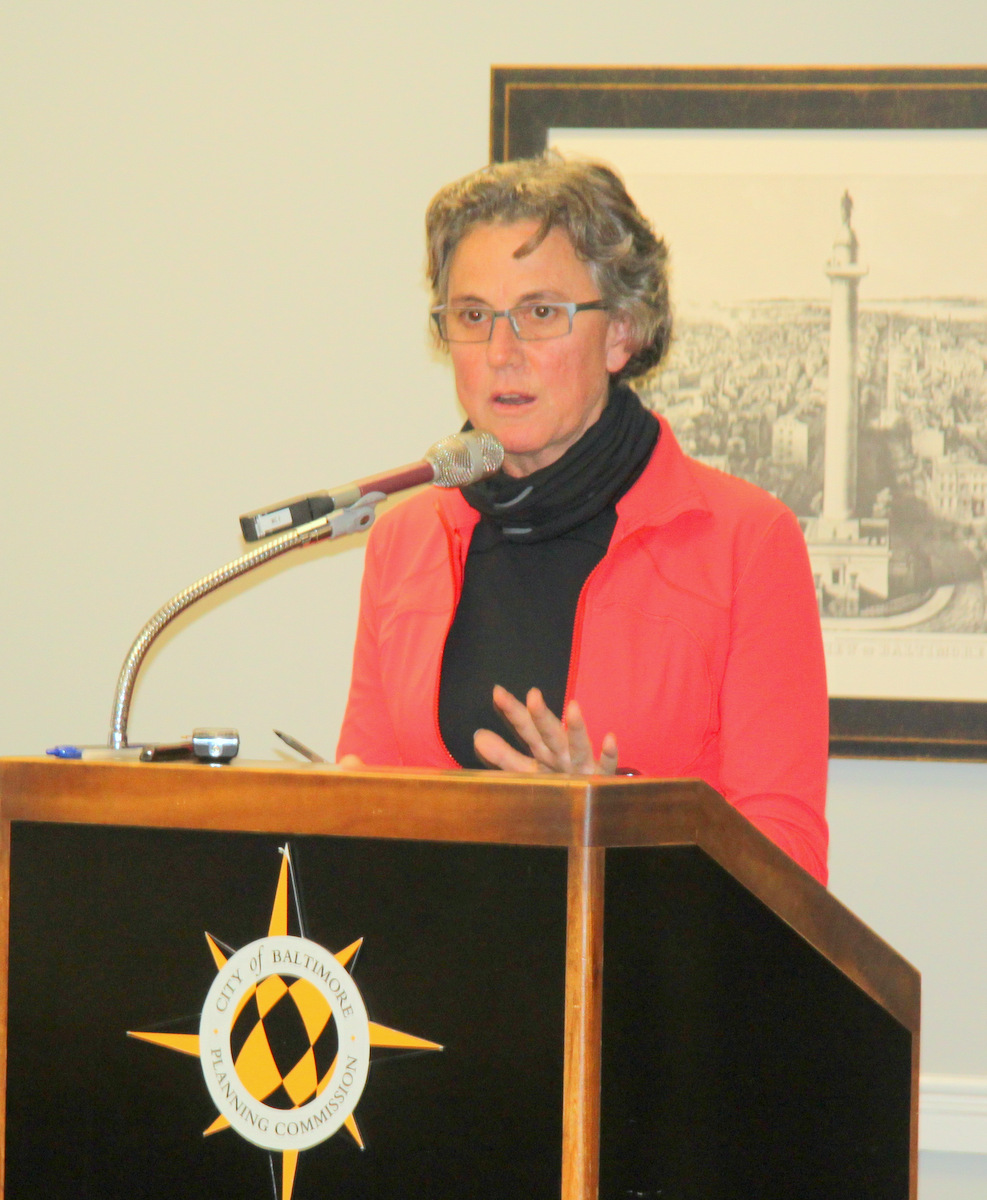 “It has gotten better, but is it the best? No!” Hamilton said, noting that the store entrance will be 200 steps from her front steps. “We have an opportunity to truly make it an example of big-box development integrating with an urban area.”

The Planning Department staff made an hour-long presentation (a repeat of one they had provided the commissioners in a working session earlier in the day, as well as in the community) explaining why they believe the changes to be minor.

But Hamilton and other critics said the design has changed significantly since its 2010 version, when it was denser, with two anchors, Lowe’s and Wal-Mart, stacked on top of each other.

They also cited the position and orientation of a loading dock near a residential street, the fact that noisier refrigerated trucks for Wal-Mart’s supermarket would be using it, and the position of the store’s entrances for cars.

“We’re asking that the loading dock not be put here, close to our homes,” said Remington Neighborhood Alliance member John Viles, of West 23rd Street, pointing to the Howard Street exit on a map.

A city planner had walked through recent changes in the design he said had made it more pedestrian-friendly and urban but Viles and others said much more was needed.

Opponents cited another change they say has occurred since the project’s original approval – a demographic shift. Resident Kelly Cross said that some of the 10,000 new families that the mayor says she is seeking for Baltimore have moved into Remington since 2010.

But speakers in favor of pushing the project forward focused mostly on the jobs and shopping opportunities the Wal-Mart would bring, and complained that critics are motivated by their dislike of the low-price mega-retailer.

Noting progress made on the nearby Rotunda shopping center, Joseph Mooney, 62, said, “There’s been more problems here because it’s a Wal-Mart.”

Bill Cunningham, also of Remington, charged that critics – despite their protestations – really do want to scuttle the whole project. The idea that they simply want to improve it is “a fabrication,” he said, pointing the finger at a community organization he said was litigious but declined to name.

“You’re all so freaking afraid of this organization,” Cuningham said, later identifying it to The Brew as the Remington Neighborhood Alliance (RNA).

Judith Kunst, whose Greater Remington Improvement Association (GRIA) supports the current design (as does the Charles Village Civic Association) had a message of rebuke, though it wasn’t clear to whom it was directed.

She decried as  “shameless” those who would judge Remington residents who support the project and assume they are “uneducated or poor.”

Among those asking the Commission to treat the changes as major were the two city council members in the audience, Carl Stokes and Mary Pat Clarke.

“I’m sensitive to what is our responsibility, not what is our right,” said Clarke, who made a point of greeting the bused-in Remington residents before the meeting. “I don’t see how it’s not clear” that the amendment is “major,” Stokes said.

“You’re not out just to delay this?” asked Councilwoman Rochelle “Rikki” Spector said.

Spector, who was sitting on the Commission yesterday as the designated Council representative, appeared to be staying in close touch with Council President Bernard C “Jack” Young, a supporter of 25th Street Station, along with Mayor Stephanie Rawlings-Blake.

Meanwhile, if there is a potential storm cloud for the project, it could come from, well, the Remington Neighborhood Alliance.

Their attorney, J. Caroll Holzer said he had sent a letter earlier in the week to the Commission noting that the developers had missed a key deadline: “a detailed time schedule” for the project required by law to be put on file. He said the old one had expired in 2012.

Since only the City Council could approve one now, he said to the Commission members, “you have no authority” to act on the PUD now.

“Thank you for setting us straight,” Chairman Bill Cunningham said acidly to Holzer.

Asked about Holzer’s statement after the meeting, Laria was furious.

“I don’t agree with him and I think it’s ridiculous,” Laria said, his face reddening.

Laria said Holzer himself slowed down the development with RNA litigation. (The RNA’s Joan Floyd disputes this.)

“He is representing a client who delayed the project and now he says the time scheduled is changed and we need to do this!?” Laria said. “He has a lot of chutzpah!”

Laria was asked by The Brew if the schedule filing was a matter of simple paperwork or a more substantive and involved process. 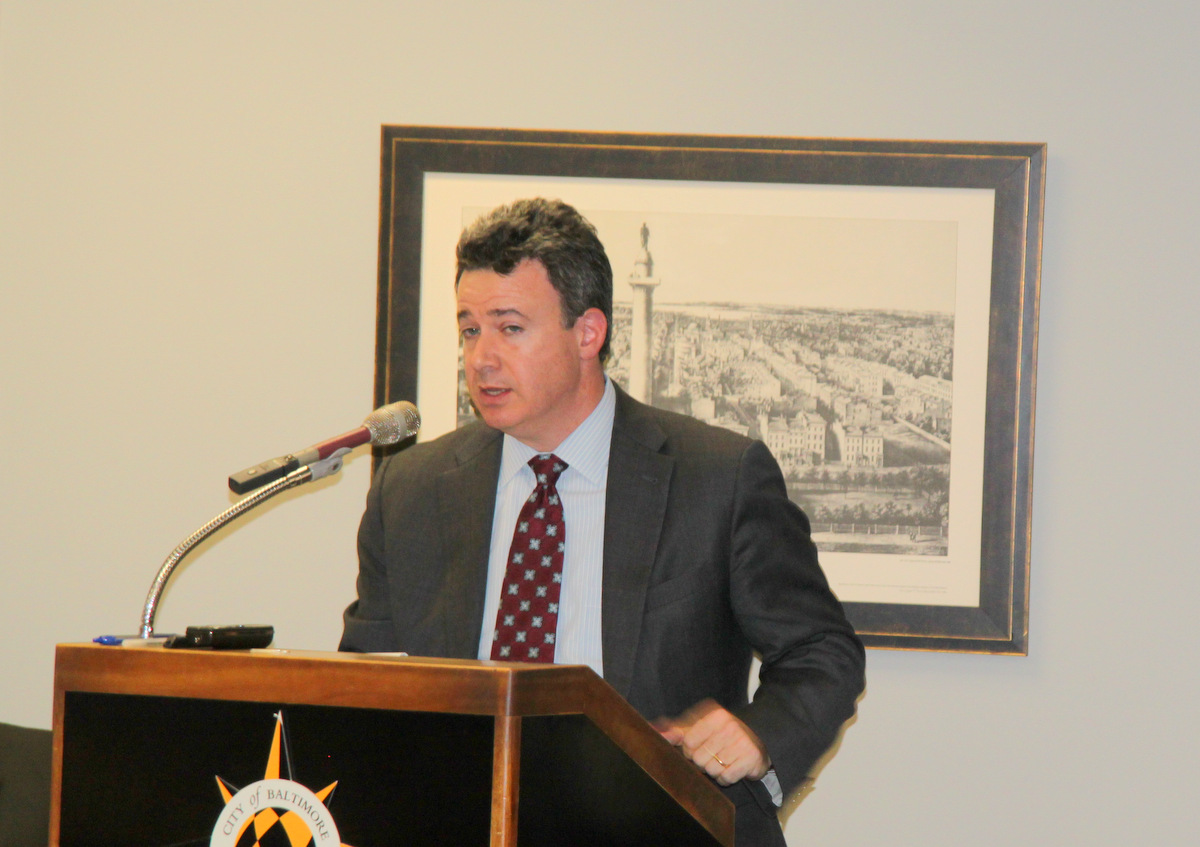 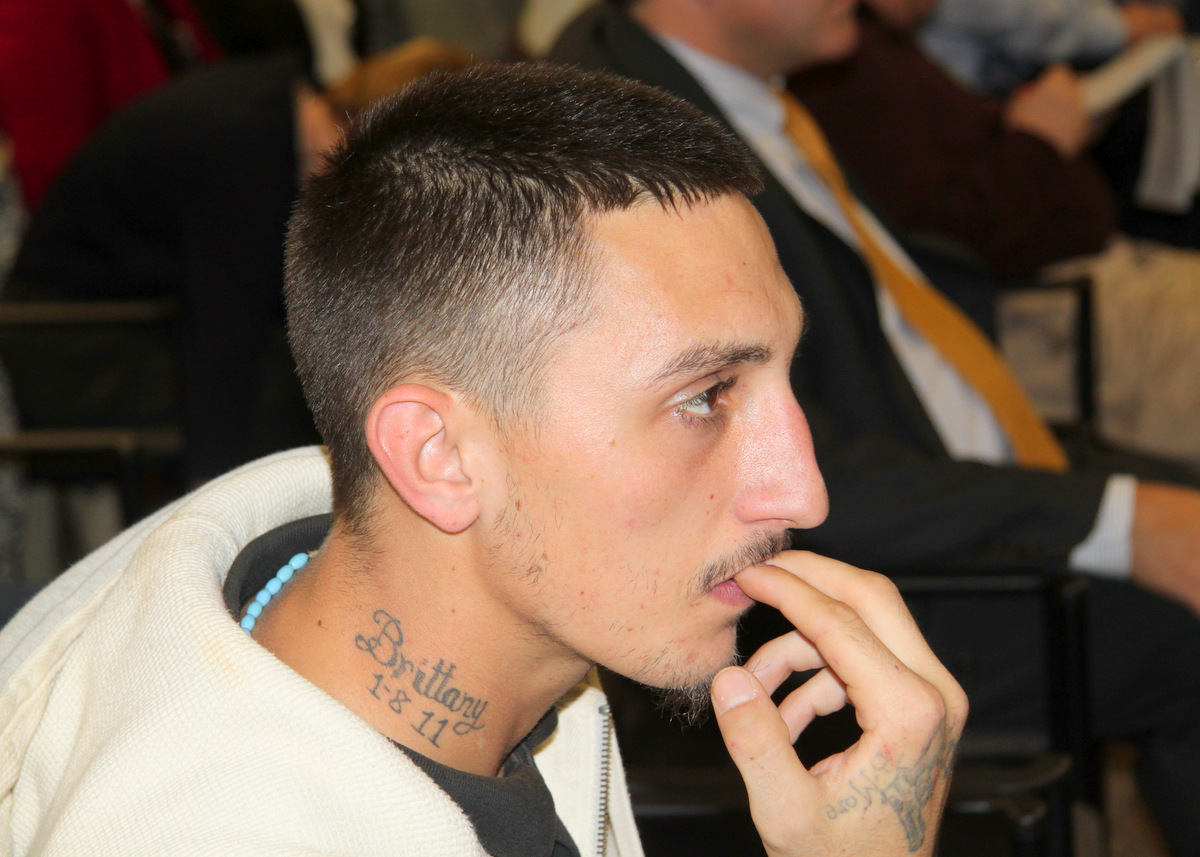 Michael Pompanio, of Remington, read a statement off his cellphone urging the Commission not to delay the project because it would bring jobs. (Photo by Fern Shen) 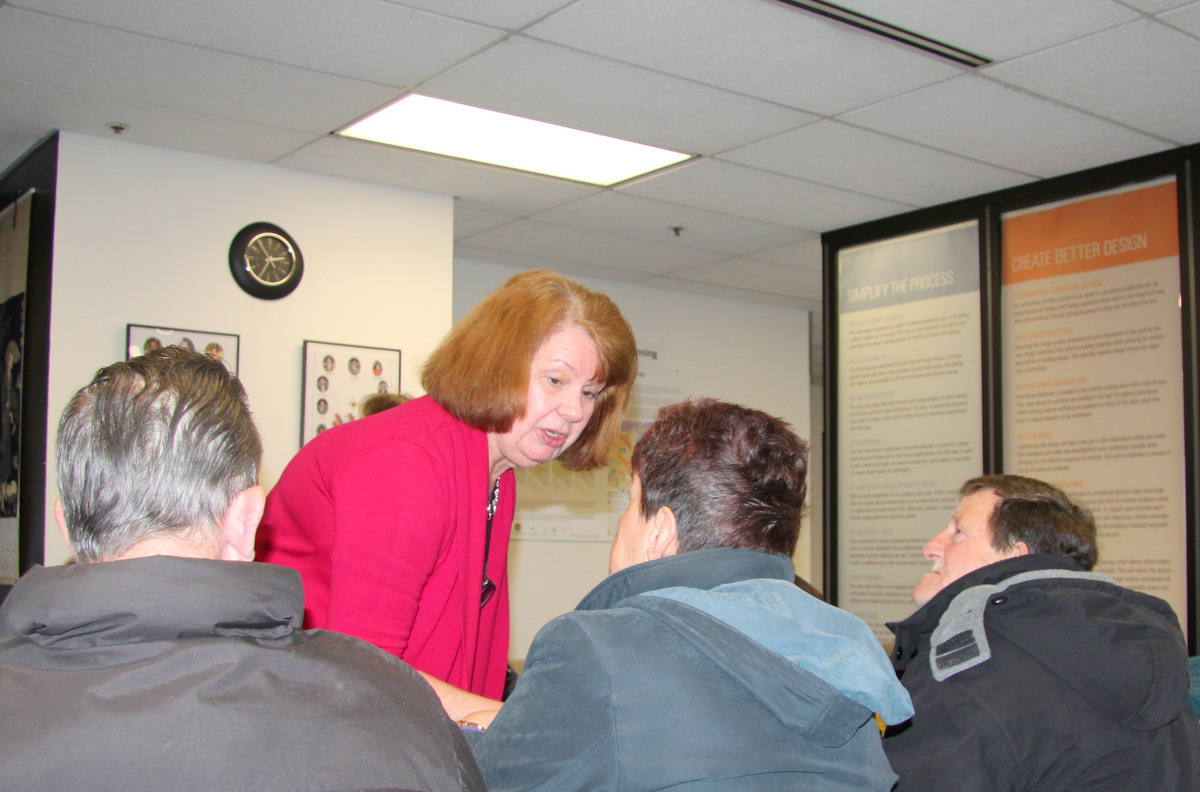 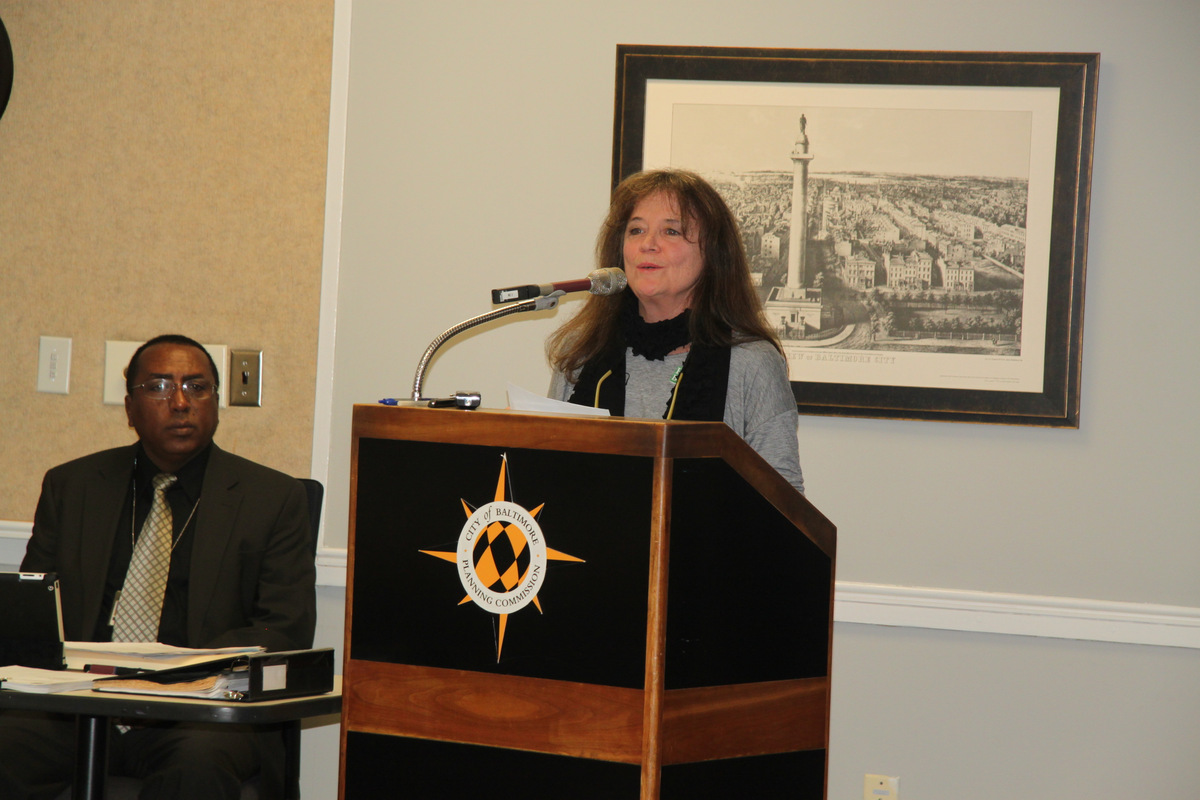 “We want it to be better,” said Cathy Yates, partner in a graphic design firm on Maryland Avenue. (Photo by Fern Shen)