City Council President Bernard C. “Jack” Young, together with other elected officials and a spokesman for St. Agnes Hospital, assured a packed crowd in Morrell Park last night that they would join the southwest community in opposing an intermodal rail facility.

The city, state and CSX officials who had so confidently presented the rail plan in the same room back in September – drawing howls from a surly crowd – barely put a team on the field this time around.

There appeared to be no representative from CSX Transportation in the room and, for the city, there was only a Baltimore Development Corp. official (who didn’t speak) and Colin Tarbert, deputy director for economic and neighborhood development for the mayor.

So where was Mayor Stephanie Rawlings-Blake – publicly invited to the meeting by Morrell Park residents after she and Vice President Joe Biden touted the intermodal facility during a trip to Panama last month?

She was watching the Ravens game at a Harbor East eatery (Townhouse Kitchen + Bar) as part of a Democratic National Committee fundraiser where, as The Brew first reported, she was to be the headliner.

“I didn’t really expect her to come,” said one of the residents leading the charge against the 24-hour, 30 to 40 trucks-per-hour rail facility, recalling the raucous, emotionally-charged September meeting. “She’s not that crazy.”

Rawlings-Blake’s stance, at this point, remains unclear. In April 2012 she wrote a letter to CSX officials inviting them to locate the facility in Baltimore.

With Panama Canal expansion to be completed within two years, the facility is said to be needed to transfer containers from trains to trucks to take full advantage of the potential for increased business at the Port of Baltimore.

Then at a weekly City Hall news conference, she hinted that “everything is on the table” as far as the facility’s location.

Last night, Tarbert said the mayor cannot take a position because “there has been no formal submission” from CSX of a plan “to approve or disapprove.”

“She’s heard your concerns. . . frankly they haven’t been addressed,” Tarbert said, attributing the delay to silence from the rail company. While the mayor thinks that the facility is important to the region, he said, “We recognize there is a local impact. . . We are looking to mitigate that impact.” 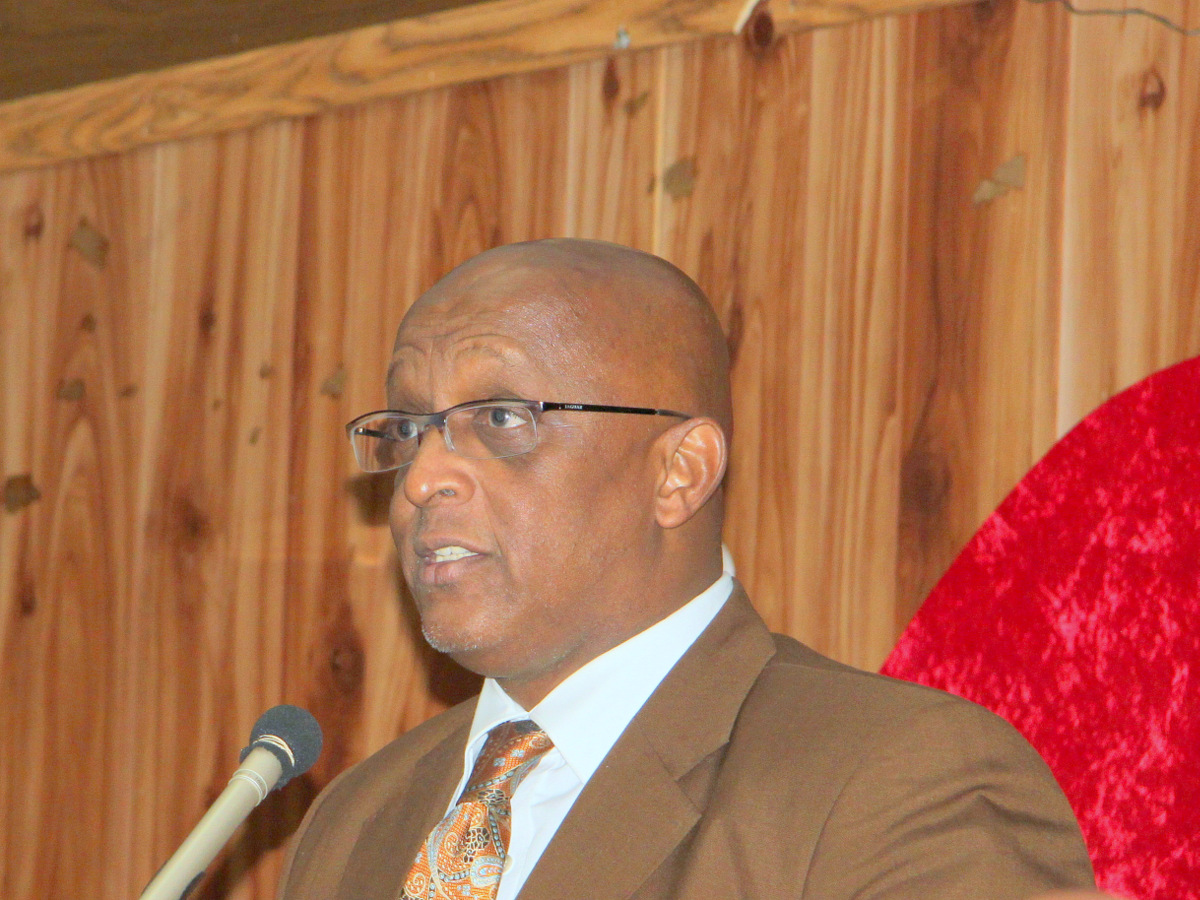 City Councilman Ed Reisinger, who grew up in and represents Morrell Park, reiterated his opposition to the project and also pointed the finger at CSX, said he has heard nothing from them.

“The Mayor’s office called CSX and asked ‘What are you going to do’ because of that meeting in September,” he told the crowd. “Their answer was ‘We are regrouping.’”

Among the elected officials present to say they will help residents resist the intermodal facility were Young, Sen. Verna L.Jones-Rodwell and Delegates Shawn Z. Tarrant and Melvin L. Stukes.

“I stand with Ed Reisinger in opposing” the project, Young told the community last night. “I will oppose this project in any form unless the community wants to come back and negotiate. But if you say no, I say no.”

Also present at the meeting, saying they were only there “to observe,” were the representatives of two candidates for governor – Heather Mizeur and Doug Gansler.

Lt. Gov. Anthony Brown, the other major gubernatorial candidate, was not represented. His boss, Gov. Martin O’Malley, has said he is willing to help share CSX’s costs with $30 million in state transportation funds, but has not directly commented on the issue in recent months.

As for residents, opposition remains strong and unanimous, judging by crowd sentiment at the meeting in the American Legion Hall on Desoto Road.

“Don’t get railroaded: stop CSX,” read a sign posted outside the building. Similar signs have appeared across the community in recent weeks.

“Morrell Park feels it is entirely too big of a facility to put in a residential community,” said resident Laurie Weishorn, who ran the meeting, which drew more than 150 people.

Rebecca Morley, of the Center for Healthy Housing, reviewed the results of the Columbia, MD-based group’s study of the impact of the facility on residents. The degree to which the community’s health is already measurably worse than that of Baltimore City as a whole, Morley said, is “astonishing.” 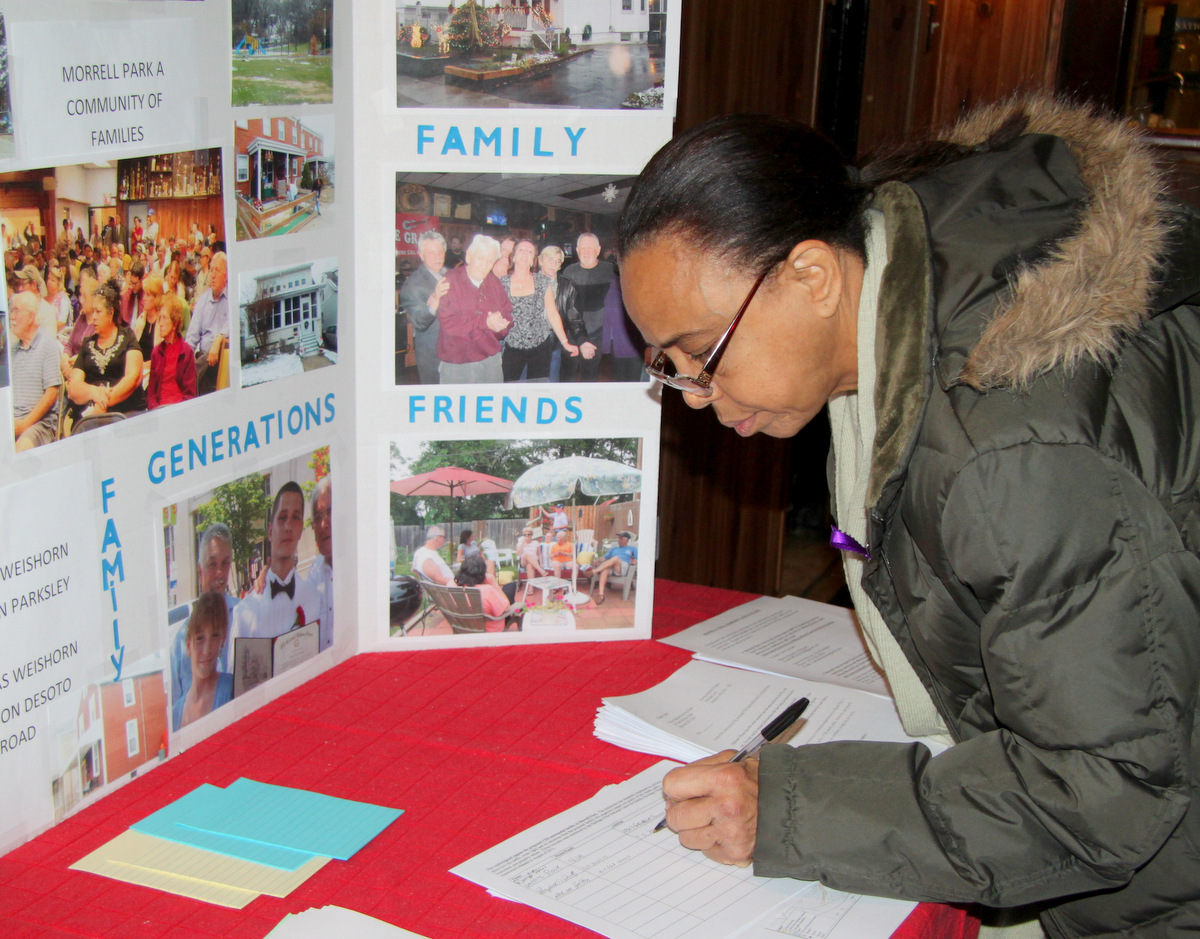 People signed the petition against the intermodal facility. (Photo by Fern Shen)

She reviewed the statistics showing higher rates of cancer, heart disease and respiratory disease, along with missed school days and additional deaths due to pollution and apologized to the crowd: “I’m sorry to be the bearer of bad news.”

“There Used to be Trees”

Several residents complained that CSX “is not a good neighbor,” saying that noisy rail activity has dramatically increased this year.

She and her husband, Shawn, who was recently diagnosed with brain cancer, have lived in the community for 20 years, she said, speaking to The Brew. She said since CSX knocked the trees between her home and the tracks, the noise has been deafening.

“What can we do to fight this?” Hayes said. “My upstairs is cracking. There used to be trees. We cannot sleep.”

“Going through the procedures” to explain their concerns with an eye toward mitigating traffic problems and noise issues was not received well by this group. That was a suggestion made by one of the few state government representative present, Bradley Smith.

There was boo-ing and someone in the crowd called out, “That sounds like more delay.”

Smith, project manager for the office of freight and multi-modalism for the Maryland Department of Transportation, did better when he stuck to what was apparently his prepared remark message: “We came out here to listen.”

Also addressing the crowd was William Greskovich, vice president of operations at St. Agnes Hospital, which purchased the nearby former Cardinal Gibbons High School property and plans a mixed-use residential and retail development with a recreation center there.

The intermodal rail facility “is not consistent with our vision for the Gibbons property,” Greskovich said, describing a playground and baseball fields.

For Greskovich, and any speaker who also vowed to oppose the project, there were cheers from the audience.