Mohamed Cisse, like the other SuperShuttle van drivers at BWI Thurgood Marshall Airport, routinely puts in seven-day weeks and 18-hour days, sometimes sleeping in his van at the airport.

But his work ethic stems not just from the need to support his family.

Because of a “franchise” arrangement that Cisse and the other drivers say is exploitative, they face a mountain of debt and pernicious weekly fees that pile up whether they are sick, business is slow, the airport is closed or – as happened to Cisse last year – their van is stolen and they cannot work.

Speaking at a recent driver protest outside the Baltimore headquarters of SuperShuttle’s corporate parent, Veolia Transportation, Cisse explained what happened in August after thieves stole his blue company-leased van from the parking lot of his Suitland apartment complex.

Unable to work for a month, Cisse still was expected to pay the multiple weekly fees owed by all drivers once they sign up to purchase the $35,000 SuperShuttle franchise over 10 years at 15% interest.

“They gave me no other vehicle,” said Cisse, 44, who is originally from Ivory Coast in West Africa.

Why the month delay to get his stolen van back? First, it took a week for police to locate the damaged vehicle. Then Cisse had to pay to have it towed. It took additional weeks for the insurance company (Marsh Insurance, which the drivers must use) to issue the check to cover the balance (after Cisse paid a $2,000 deductible).

Then, still more time passed while the repairs were completed.

“I kept calling. I was going crazy. I needed to get back to work. I knew they are charging me all these fees,” Cisse said.

What Cisse had to pay was his basic “franchise” repayment and all the other fees drivers typically owe: a van lease payment, two kinds of insurance, the 17.5% fee charged by the airport authority, a $500-per-week “system fee” to cover “mobile data terminals” used to transmit dispatch information, and other miscellaneous fees.

(One of Cisse’s “Weekly Vehicle Summary” sheets shows the many charges the drivers must pay.) 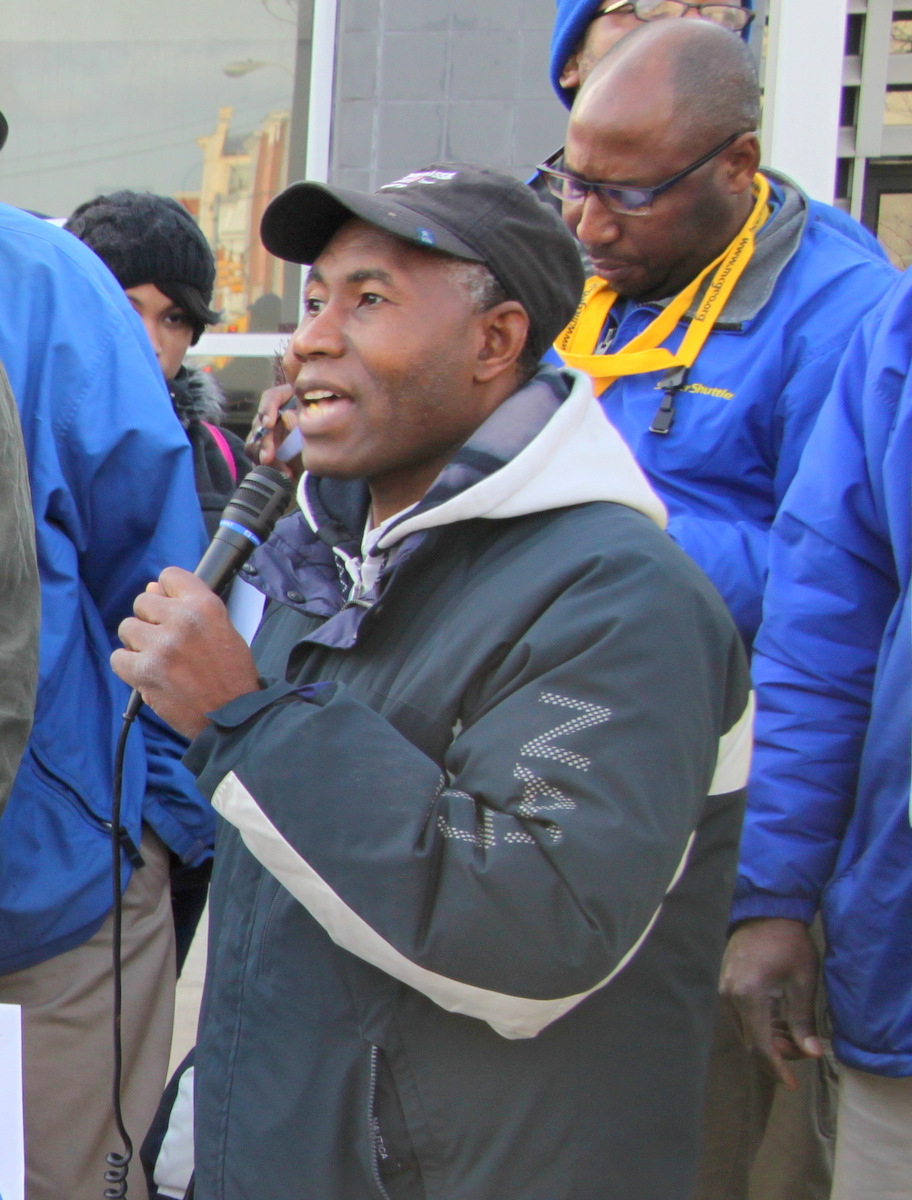 Shuttle driver Mohamed Cisse often sleeps in his van at the airport, so he won’t miss a job. (Photo by Fern Shen)

When Cisse finally got his van back, it took him eight weeks just to pay off the debt, an especially daunting challenge at first because, he said, he had no money for gas, “not one penny.” (Drivers pay for their own gas and maintenance costs out-of-pocket. Cisse estimates his gas costs at $100 per day.)

“I asked the company to just lend me the money, give me a break on the gas, but they wouldn’t,” Cisse said.

The other drivers took up a collection to help him. Finally, for his ninth week of work after he got the van back, he got a paycheck: $101.

“No Way I Can Get Ahead”

The high fees, along with other alleged harsh working conditions, are at the heart of a dispute between drivers and European transportation giant Veolia, that has flared into lawsuits and unionization battles across the country.

Even when they are working, the drivers say, the cost of gas and these fees leave them with barely enough to scrape by and, on many weeks, they wind up owing the company money.

Several said it was not unusual to come away with just $200-$300 at the end of a week. Cisse said he has pushed it, sleeping in his van at the airport and, after a 110-hour week, made $500. The drivers take a number and wait their turn.

Part of the problem, the drivers say, is that the company has taken on more and more franchisees at BWI, though the amount of work available to them has not increased.

“There is no way I can get ahead,” Cisse said, speaking with The Brew after addressing about 40 people assembled earlier this week at the rally organized by United Food and Commercial Workers (UFCW) Local 1994 and area activists, including Sharon Black of Baltimore People’s Assembly. 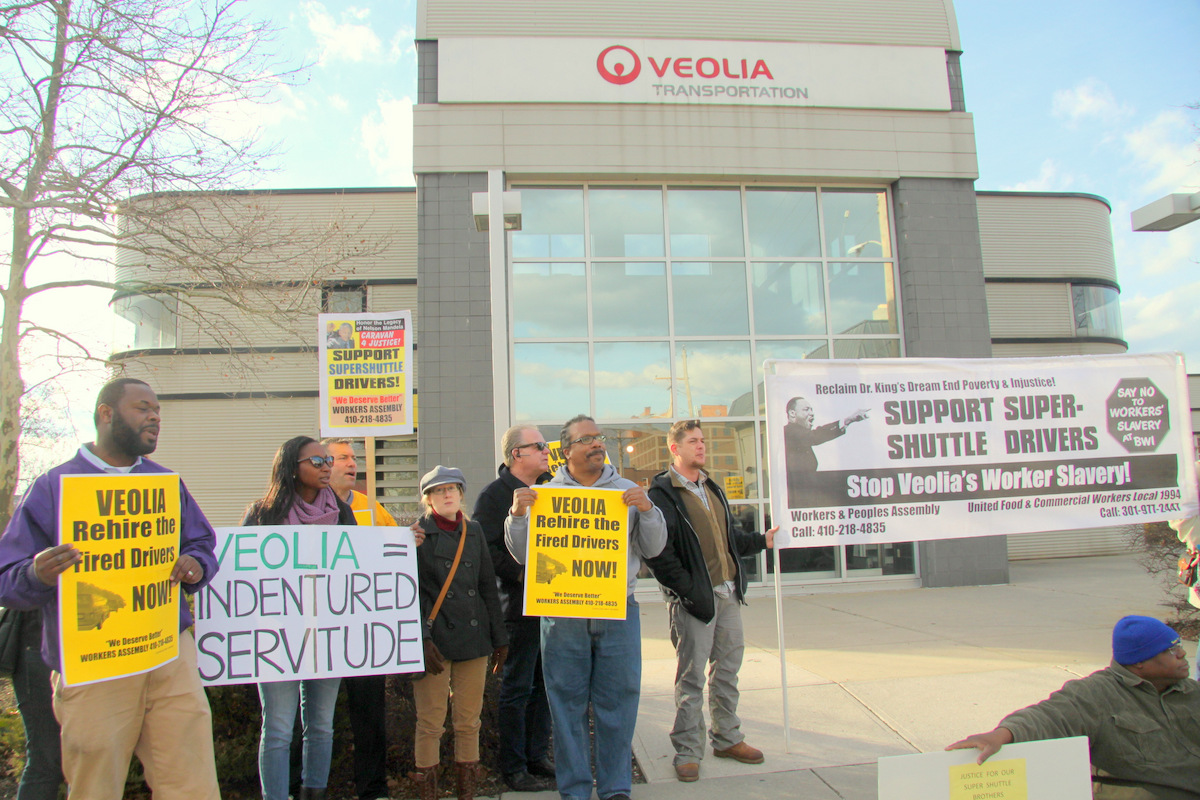 SuperShuttle drivers and their supporters protesting outside the Baltimore offices of Veolia Transportation, SuperShuttle’s corporate parent. (Photo by Fern Shen)

Cisse and other drivers say they work 16- to 18-hour days, often sleeping at the holding center near BWI in order to be available for a job that could help them make their weekly payments to SuperShuttle and clear at least some profit.

“At the end of a week, you can go home with nothing,” said Tony Koukou Yovo, who said he was fired six weeks ago for participating in a November protest at BWI, complaining about broken dispatch equipment, for which drivers pay the $500-per-week “system fee.”

“These drivers do not know what they’re getting into when they sign these terrible agreements,” said Amy Millar, growth and strategic planning coordinator for Local 1994, noting that a lot of them are immigrants from West Africa. “Nobody would sign them if they did.”

Millar said it is next-to-impossible for drivers to find anyone willing to buy the franchises. Since they get no fee break for illnesses, they must hire a company relief driver to take over until they recover. They also get no health insurance benefits from SuperShuttle.

“This month, most of us will take money from our life savings to pay SuperShuttle,” sais Baba Saidykhan, originally from Gambia, calling the situation “intolerable.”

Dwight Kines, a vice president with Veolia Transportation on Demand, declined to get into specifics about Yovo’s and Cisse’s cases, but disputed the allegation that the drivers are exploited.

“I strongly disagree,” said Kines, in a phone interview with The Brew. Kines had figures that differed markedly from the drivers’.

Millar and the drivers said their weekly expenses (for gas and SuperShuttle fees and franchise repayment) routinely reach or exceed $2,000. Cisse’s “Weekly Driver Summary” from October showed about $1,630  for fees. He said keeping the gas tank filled for five days means another $500 or more that comes out of his pocket.

Kines, however, said their pre-gas fees average about $800.

“Our drivers are able to make a good living,” Kines said. He noted that the company has a program to help drivers sell their franchise and offers a couple of weeks credit on the fees each year if drivers wish to take a vacation.

“Can you name another franchisor – McDonald’s, Subway, Dunkin’ Donuts – where this is allowed?” he asked. He also said that driver turnover has dropped to 15% in recent years.

“That reflects the fact that the vast majority of our drivers are successful,” he said, in an email. “When we operated under the employee model, turnover was over 150% – yes, 150% per year.”

Millar said that’s because they can’t find anyone to take over franchises with such onerous terms.

As for Yovo, who has worked for SuperShuttle since 2005, Kines declined to discuss the reasons for his firing except to say “We would never have terminated Tony for complaining or protesting about transponders. We work too hard to recruit and train good franchisees to terminate them for something so minor.”

The malfunctioning dispatch equipment, he said, has been replaced.

The D.C.-based Center for Public Integrity last year took a close look at the implications of SuperShuttle’s shift from employees working for an hourly wage to a system of franchisees, whom they refer to as “independent business owners.”

“In doing so, SuperShuttle has shifted, in its own words, ‘hard to manage variable costs from the company’ to the drivers, making ‘gross profits more stable and predictable,’” the CPI story said, quoting from company documents.

SuperShuttle’s critics say its income from the driver franchises is more important than its customer business and franchise disclosure documents back that up. They show that in Maryland, about half of the company’s 2010 revenue ($4.9 million) came from franchise sales, while nearly all the rest came from reservations ($5.1 million), the CPI report said.

It’s part of a national trend toward “reclassification” of workers as contractors or franchisees. Companies benefit, but workers typically lose labor protections, and state and federal coffers suffer as well, since the company is exempt from paying unemployment and workers compensation. 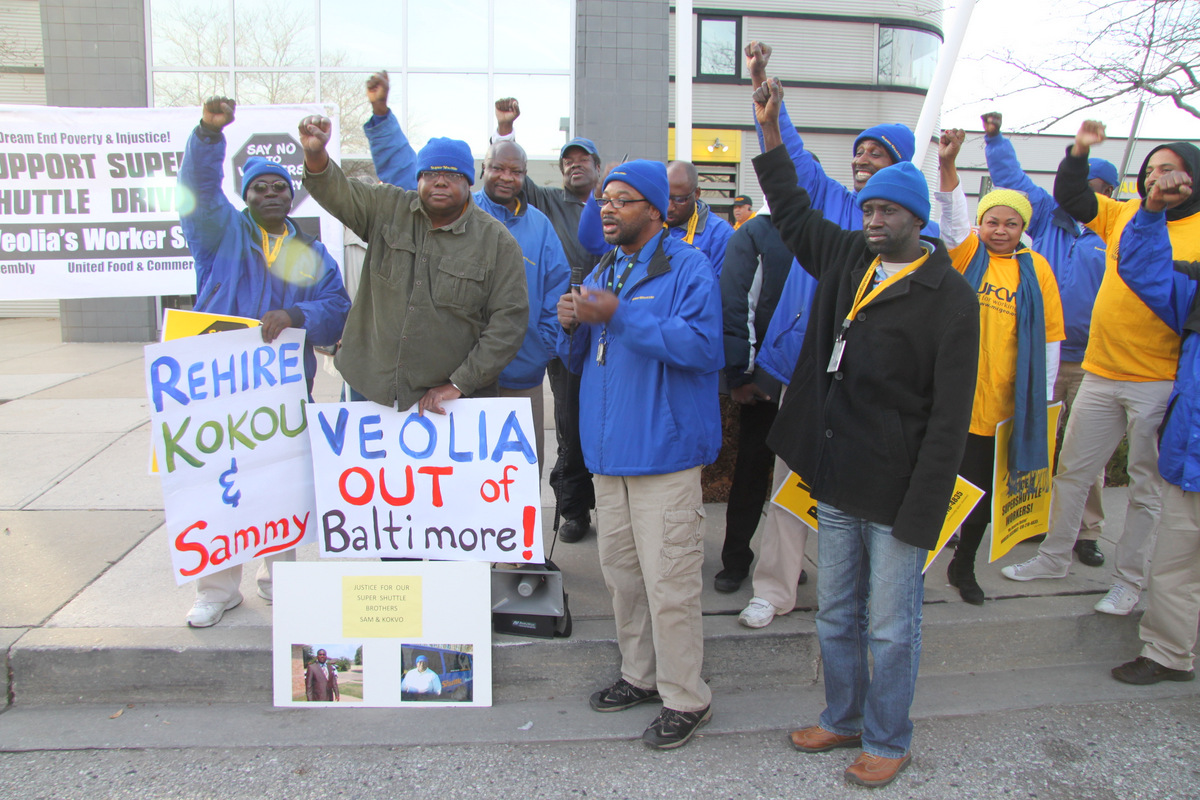 Van drivers at BWI say working conditoins, and their “franchise” agreements with Veolia-owned SuperShuttle, are intolerable. (Photo by Fern Shen)

In order to unionize, the SuperShuttle workers must prove to federal regulators that they are employees and not true franchisees, a legal hurdle that has produced mixed results in other states (failing in Dallas, succeeding in Denver.)

During the last five years, as BWI’s 100 shuttle drivers have sought better treatment (supported lately by the UFCW), they have also had mixed success.

They won a victory in August when the Maryland Department of Labor, Licensing and Regulation ruled that the shuttle drivers are employees, meaning the company must play state unemployment insurance. (The company, which denies that it misclassifies workers, has appealed that decision in Anne Arundel County Circuit Court.)

The National Labor Relations Board, meanwhile, has ruled on the side of the company, determining that the drivers are not employees. The UFCW, in support of the drivers, has appealed.

The union has also been working with a Montgomery County legislator on a bill in Annapolis which would restrict BWI from entering into concession contracts with companies that don’t properly classify workers.

Millar said the drivers were polled an overwhelmingly supported union representation. Approximately 90% of the drivers at both BWI and the Washington Airport Authority (DCA and Dulles)have signed union authorization cards.

But, hoping to get some improved working conditions, the BWI drivers also asked SuperShuttle to negotiate with them as an association. “They wouldn’t do it,” Millar said.

“After I Start, I Find Out it is a Gimmick”

While the union pursues the various avenues and organizes a public awareness campaign, drivers who speak out believe that they are taking a risk.

Yovo said the reason given for his termination was a false accusation that he popped his van’s hood and blocked traffic during a November “caravan” protest at BWI. Even though he had paid his $35,000 fee in full, he now has no van to drive for the remaining two years on his contract and no unemployment compensation. The protesters said Yovo was one of two drivers fired for speaking out about conditions at SuperShuttle.

“We are with you,” said Patrick Benhene, a driver for six years who leads the group.. “I don’t know the repercussion. But I will not stop speaking the truth.”

He was looking out on a crowd that included Claire Evans, leader of the SuperShuttle drivers in DC/Virginia , and Cory McCray, of the International Brotherhood of Electrical Workers and a candidate for Baltimore’s 45th District seat in the House of Delegates.

Cisse said he was happy to at the event, speak but eager to get back to work, which he did after the rally. LAter, speaking by phone, he talked about he had gotten hooked up with SuperShuttle.

After coming to the U.S. 23 years ago, he lived in New York City, moving to Maryland two years ago. A father of three (his children are 14, 10 and 10 months), he said the family moved to Prince George’s County a few years ago seeking more space and a better atmosphere for the children. (His wife’s work at a hair braiding salon has gotten them through hard times, he said: “Without her, we would be homeless.”)

For a time, he said, he remained in New York driving a cab, coming to be with his family on weekends.

“Then one day my daughter said, ‘Daddy, why don’t you come here all the time? Why do you only come on the weekends?’” he recalled. “That really hit me hard.” On the advice of a friend, he signed up with SuperShuttle, thinking it would be “like owning a business.”

“After I start, I find out it is a gimmick, it’s a fraud. It’s without value. You leave empty-handed,” he said. “Now, there is no way out.”

Cisse said he wishes he’d been able to see his troubles coming, but mostly he blames SuperShuttle for tricking him and other franchisees: “They know we don’t know the law.”