Speaking in Morrell Park to residents fighting the proposal to put a CSX intermodal rail facility in the southwest Baltimore community, gubernatorial candidate Heather R. Mizeur last night assured them “you have a friend in me.”

“This project does have to be built. . . this is critical for the future of our port and the economy – but it doesn’t have to be built here!” she said, bringing cheers and applause from a crowd of more than 40 people packed into the meeting room of a Morrell Park church.

Mizeur urged the community to continue to put pressure on the state “to go back to the drawing board” and look at the other four sites considered and discarded in Howard, Anne Arundel and Prince George’s counties.

“They were in the middle of studying this and it was halted when what appeared to be a cheaper solution came to the table,” she said.

Mizeur said the issue “snuck by” lawmakers like her in Annapolis who had been aware of the four sites and then thought the issue had been settled because Mayor Stephanie Rawlings-Blake had invited the state to site the facility in Baltimore.

“It seemed like, once it shifted to Baltimore,” she said, “that ‘Oh well there was consensus. The mayor wanted it to go there and it was going to go there!’”

Mizeur, a self-described “downstate liberal” from Montgomery County, began the meeting with a portion of her stump speech, invoking her Midwestern roots in social justice Catholicism and the blue-collar organized labor tradition of her welder father.

When she talked about the reasons other sites were rejected and Morrell Park was targeted, she found a ready audience. 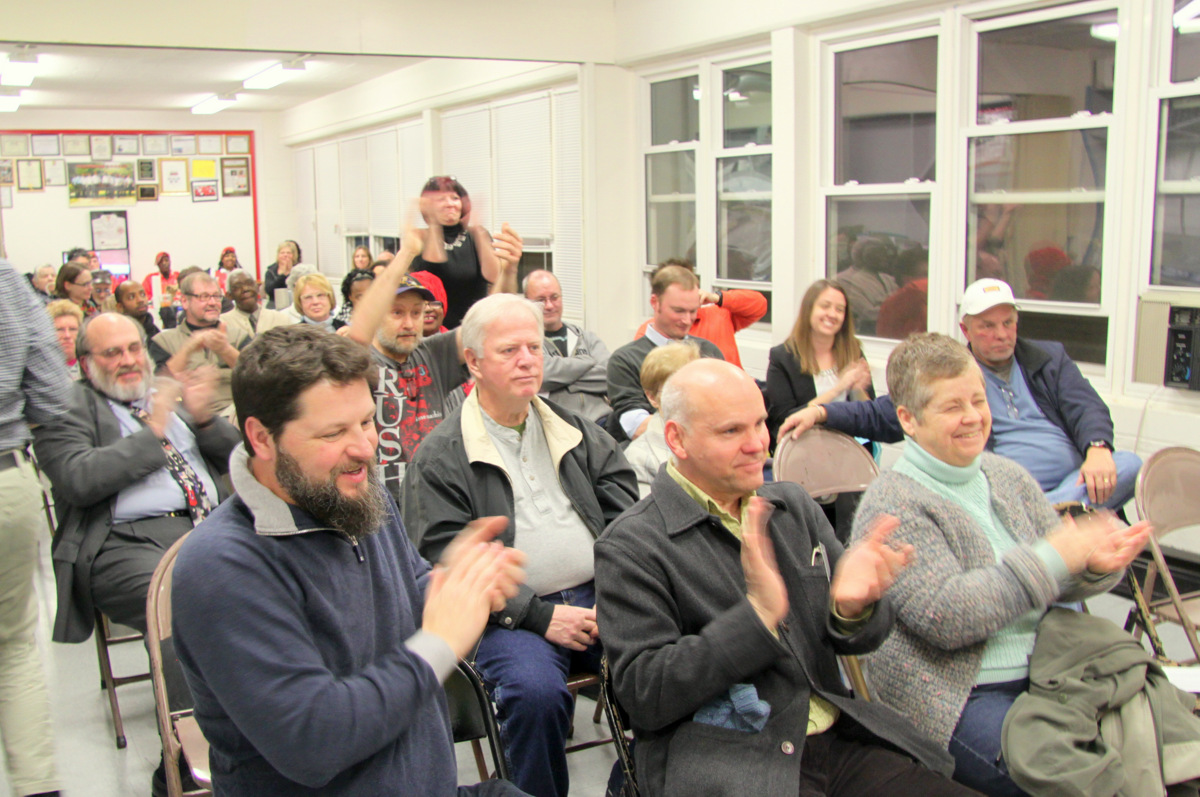 More than 40 people packed a Morrell Park church meeting room to hear what Heather Mizeur had to say about the CSX project. (Photo by Fern Shen)

Suburban Elkridge, she noted, was rejected “because they were able to push it back with a lot of political pressure.”

Meanwhile in Morrell Park, “you have a community where the median income is half the rest of the state’s – $39,000 a year instead of $70,000 – and you look at the two census tracts and the unemployment rate is two times bigger than either Baltimore or the state,” she said.

“What this says to me is they feel like ‘We can shove it down the throats of an under-served, disenfranchised community that will just let it happen,’” Mizeur concluded, to applause. “But you have proven it other wise. . . You are organizing. . . I salute you.”

Mizeur tempered her enthusiasm with some practical advice and a promise of help even if she is not elected governor.

Noting that as a member of the House of Delegates she sits on the Appropriations Committee, she promised to “pose tough questions” and “push for reconsideration of those other alternatives.” But she also said, “This legislative session, I don’t know for sure that we can turn it back without support at the highest levels.”

Mizeur’s comment that perhaps the other sites suggested in Baltimore (Locust Point, Mount Winans and Curtis Bay) might have been discarded too early sent a murmur through the crowd, which included some Mount Winans representatives.

“It should not go in any residential area – I don’t think it should go in Mount Winans or Curtis Bay – it should go in an industrial area,” said meeting leader Laurie Weishorn.

Mizeur also advised the residents to continue to push the City Council for support (“I know you’re getting your votes lined up.”), because the project needs permitting from the city to move forward.

Both City Council President Bernard C. “Jack” Young and Councilman Edward Reisinger have said they stand with the residents but several in the audience last night said they worried that the council is too beholden to the mayor and governor (and to the candidate they support, Lt. Gov. Anthony Brown) to really oppose them on this issue they have backed so strongly.

Reisinger, who had promised to attend last night’s meeting, angered one organizer by not showing up after promising to come.

A representative from another gubernatorial candidate’s camp, that of  Democrat Douglas F. Gansler, was at last night’s meeting as an observer.