What’s it like to attend a public elementary school that lacks a gym?

A 9-year-old student from Wolfe Street Academy in Upper Fells Point explained it Wednesday night to the three Democratic candidates running for governor as well as to a crowd of more than 300.

“Right now, we spend the winter and rainy days playing whatever we can between the cafeteria tables,” said 4th-grader Eric Castañeda.

In good weather they go to a small blacktop area outside. Or they go to a lane behind the school, where the gym teacher uses cones to block off traffic and has the children walk on the sidewalk, keeping track of the distance as part of Wolfe Street’s “Mileage Club.” 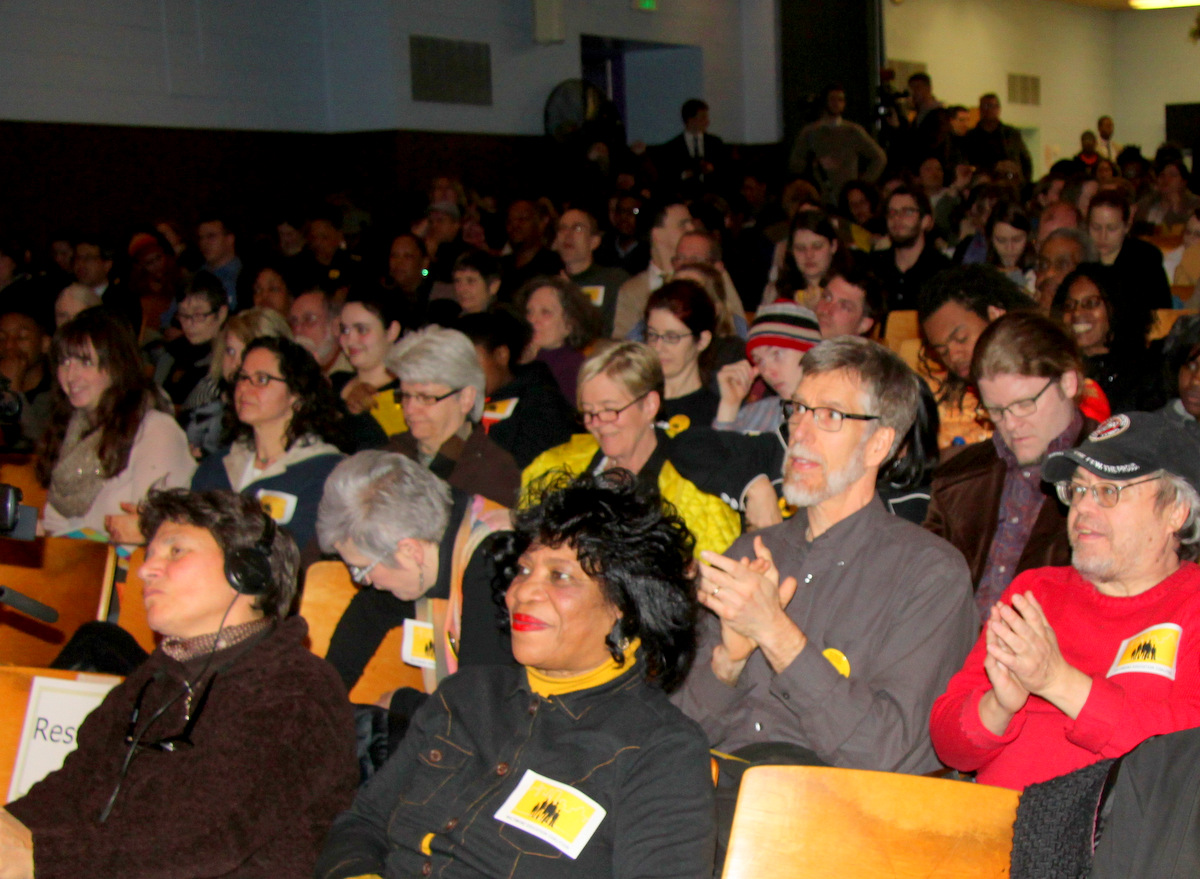 The biggest applause from this crowd went to students and to candidate Mizeur. (Photo by Fern Shen)

“There aren’t a lot of sports leagues in our neighborhood and there is not a lot of open area a safe walking distance away,” Castañeda said.

“I want to learn to play basketball. I want to run. I want to be able to play real sports year-round. . . Please help us get a gym at Wolfe Street Academy.”

Maryland Attorney General Douglas F. Gansler spoke next. And following the evening’s format, he had to answer questions from four panelists, using five minutes for each. The first was about possible changes to the state education funding formula.

But Gansler began his answer with a long preamble addressed to Castañeda, jokingly chiding the youngster for not mentioning lacrosse and that six years ago he started something called Charm City Lacrosse that meets in Carroll Park on Saturdays.

“We’d love to have you,” he said to the nine-year-old, whose school is more than three miles from Carroll Park. “I’d love to have you come on Saturday mornings.” (At another point in the talk he noted that he “went to Yale because of lacrosse.)

Then it was on to more general talk about how Gansler was going “to fight, as governor” to make sure the city gets Phase II funding to continue repairing city schools, following the $1 billion Phase I package approved by the Maryland legislature last year.

“Attorney General, I want to ask a followup question,” said Fothergill, a co-founder of the group that sponsored the forum, the Baltimore Education Coalition.

The original question, she reminded him, had been about the adequacy and equity of the current funding mechanism for Maryland schools.

It was one of many instances where the candidates had to be pulled off of stump-speech riffs – or flights of digression – by organizers of the non-partisan, informational forum. It was held at City Springs Elementary School before a  crowd of parents, teachers, students and the battle-hardened education advocates.

The ACLU of Maryland, BUILD, the Baltimore Curriculum Project and a host of other groups joined BEC for the event, aimed at keeping the city’s education needs prominent in the run-up to the June 24th state primary. 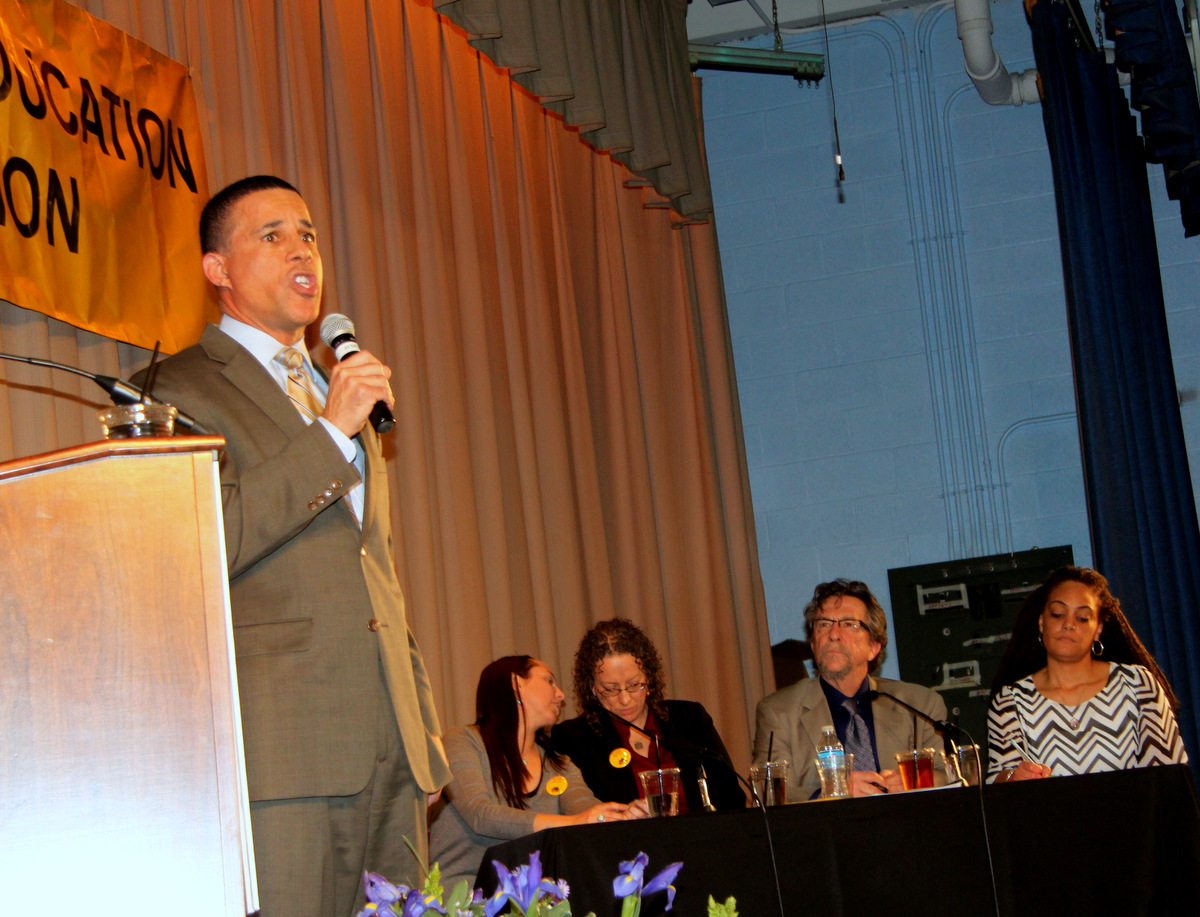 “BEC is not going anywhere,” said Zuri Battle, of the Greater Homewood Community Corporation, addressing the crowd. “We are even more committed today to advocating for all Baltimore city students.”

According to BEC’s news release “six of the leading candidates were invited to individually answer education-related questions submitted by Coalition members. Democrats Brown, Gansler and Mizeur attended. Republicans Larry Hogan, David R. Craig and Delegate Ronald George were invited but did not attend.

He also began his answer to Fothergill’s question with remarks aimed at making a personal connection with the crowd, recounting how his father was born in a poor neighborhood in Kingston, Jamaica, and beat the odds to succeed in life.

“No child in Baltimore City should  have to climb the ladder of opportunity by beating the odds,” he said. “We can do better than that.”

He efficiently worked his way back to the original question, saying the education adequacy and equity study is “long overdue” and should be “accelerated and we should not have to wait for it until the end of the year.”

The evening was a display of style and personality as much as a forum to tease out the candidates’ policy positions, many of which are quite similar and are spelled out on the candidates’ websites, as each of them pointed out.

(Complete audio from the event will be available soon on the website of event moderator, Marc Steiner of WEAA 88.9 FM.)

In addition to the funding formula question, the panelists also asked about the whether pre-K programming should be funded as part of the per-pupil school funding formula (it’s not, now) and ow important they consider funding full-day Pre-K (since City Schools provides full-day now and gets no state or city funding for it.) They also asked how the candidates propose to address the needs of the 100 city schools in poor condition but not covered by the funding initiative approved by the legislature last year.

If Brown was intense but workmanlike and Gansler was conversational and a bit rambling, Mizeur was passionate and big-picture.

Tackling the facilities question, she offered a stark and pertinent example – the City Springs building itself that was hosting the event is so overcrowded that, earlier in the day, some students taking the Maryland School Assessment tests had to sit in the gymnasium.

“And the children were in coats,” Mizeur pointed out.

(Principal Rhonda Richetta later confirmed this, saying, “There is a problem with heat in the gym” and noting that when she first came to the school there were 300 students. Now there are almost 700. With space that tight, making the special accommodations some students needed for the test posed a seating problem and meant students were seated in the hallways as well as the gym.)

How to find funding for the second set of schools, places like the Wolfe Street Academy, which are not scheduled for repairs in the first round of construction funding? (Wolfe Street’s place on the list puts a gym or other upgrades 10 years away.)

Mizeur suggested approaches such as the Iowa legislation that allowed individual jurisdictions to impose a penny sales tax to create a dedicated funding stream for school repairs. Another was labor trade agreements with building trades unions, whereby “in exchange for investing a portion of their pension funds into expanding the school construction authority. . . we guarantee when building these buildings we use local labor, union labor.”

Let’s Not Accept the Status Quo

Her answers took a surprising turn when she addressed the school funding formula currently under review that directs more funds to jurisdictions with greater poverty.

Equity issues must be addressed, she said. “More children than ever are on free and reduced price meals, there are more children with English as a second language.” But she called also for a more “holistic” approach. 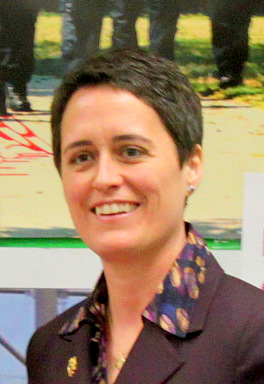 “Let’s hold out a hope that one day we don’t have to have the need for funding formulas,” Mizeur said.

“We shouldn’t just be OK with accepting that some communities are forever going to be poor. Let’s start attacking the poverty issues directly, straight on the head.” There was a pause, then big applause.

From there it was on to “not just a minimum wage but a living wage,” middle-class tax relief and “being smart about crime, eliminating mandatory minimum sentencing, ending our failed war on drugs.”

Fothergill again stepped in, saying “we appreciate your passion,” but asking her for solutions that can be applied now. “I’m especially long-winded,” Mizeur apologized, getting a laugh from the crowd.

On the subject of expanded pre-K, which both Gansler and Brown support, Mizeur said her position is different.

She said she wants to extend it not just to four-year-olds but to three-year-olds, and to pay for it with the savings derived from decriminalizing and taxing the sale of marijuana and making other justice reforms.

“Discomfort the status quo for a change,” she said to more big applause.