Crime has declined sharply in Baltimore’s southeast neighborhoods, but is still running higher than a year ago, an analysis of police crime data shows.

In January, the Southeast Police District was the scene of nearly one in five violent crimes in the city. The district, which includes not only the waterfront communities of Fells Point and Canton but sections of East Baltimore south of Monument Street and Pulaski Highway, reported a 30% surge in violent crime.

In February, violent crime dropped 34% from January (69 incidents versus 105), according to police records compiled by Comstat.

Aggravated assault declined 21% and gun crimes fell by 67%. (February has 28 days, or three fewer than January.)

When compared to last year, though, there’s been a 19% increase in violent crime and 16% rise in gun crime for the first two months in the district.

Southeast currently leads the city’s nine police districts in terms of violent crime and is second (behind Northeast) in gun crimes.

See charts below. For full data see here. PLEASE NOTE: These numbers are for the overall police districts, not for individual neighborhoods within the districts, some of which may have experienced crime increases.

The January spike in crime in southeast neighborhoods – punctuated by the bludgeoning death of a 51-year-old women, allegedly by two teenagers who were burglarizing her Patterson Park home – shocked residents. 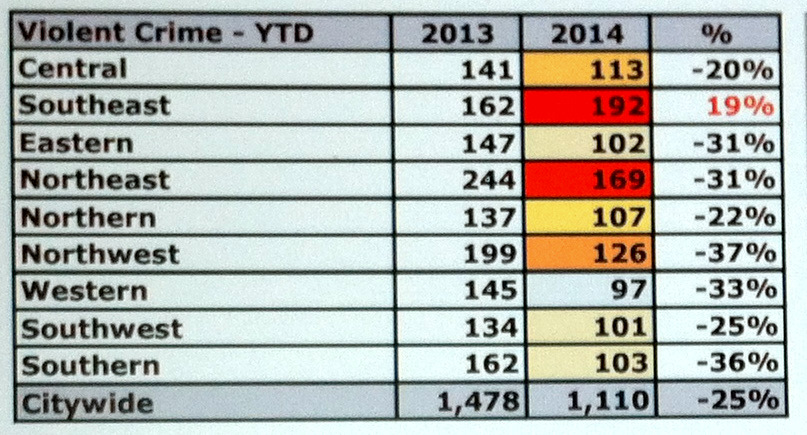 Stats from the first two months of 2014 show declines in violent crime in all police districts except for the Southeast. (Comstat data)

Citywide, homicides have dropped from their January highs. There were only nine homicides recorded last month, compared to 27 in January. Except for a small up-tick in commercial robbery and auto thefts, serious crime in Baltimore was down. 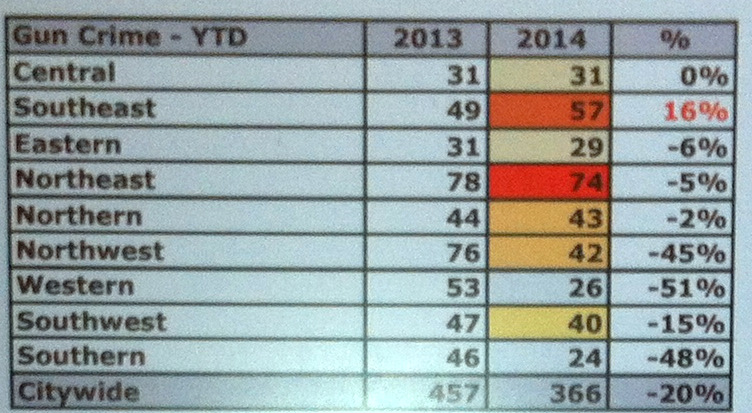 All of this is welcome news to Commissioner Batts, who was recruited 18 months ago by Rawlings-Blake to head the police force and has witnessed a stubborn rise in homicides over his tenure.

Batts has pledged to run the department more efficiently and to improve the often-strained relations between the force and residents in high-crime areas.

Batts also beefed up patrols around Patterson Park as well as police investigations of a spate of burglaries around Butchers Hill, Highlandtown and Canton.

One area of citywide focus is juvenile crime, with police saying they will question teenagers who are not in school or are acting suspiciously.

In the first two months of this year, police made 462 juvenile arrests, Comstat statistics show, compared to 537 in 2013.

While the overall number of juvenile drug arrests has declined, arrests involving aggravated assault, burglary and stolen autos have gone up. Many juvenile burglaries and robberies are being coordinated by adult ringleaders, police say.