Speakers at a packed hearing at City Hall last night made the case for the promise – and the pitfalls – of a controversial plan to sell nearly two dozen of Baltimore’s public housing high rises to private developers over the next 18 months.

Housing officials say the plan means the buildings, many of them operating in decrepit conditions after years of deferred maintenance, could be overhauled, with a projected $330.8 million in private funds.

But advocates said that, without federal housing guarantees in place, the plan means diminished safeguards for current residents. Union leaders said officials had left them largely in the dark about an initiative that could mean layoffs for up to 200 current Housing Authority of Baltimore City (HABC) maintenance and security workers.

“This is not the program I would have chosen. This is the one that is available at this point,” said Paul T. Graziano, executive director of the HABC, also the city’s housing commissioner.

Graziano has been on a media blitz explaining the federal pilot program, framing it as the only viable strategy for salvaging dilapidated public housing units that his agency can no longer afford to maintain. 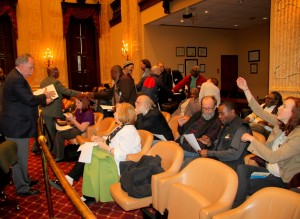 Advocates and media read documents about Baltimore’s participation in the federal RAD program.

The discussion of the Rental Assistance Demonstration, or RAD, project last night was before members of the City Council’s Housing and Community Development Committee.

Chairman Bill Henry had called for the informational hearing, which lasted nearly three hours, after news of the city’s participation in RAD reached the public and startled residents and many advocates.

Graziano testified for about an hour on the RAD program. He said taxpayers, through the HABC, had already spent about $300 million on upkeep and capital costs of public housing in the city over the past decade – including a $65.2 million loan in 2003, $66 million in federal stimulus funds in 2010, $51 million in loans for energy-related upgrades and a $3 million loan from Harbor Bank – and “we still have $800 million in needs.”

He then sat and listened to an hour and a half of comments, complaints and questions from public housing residents, HABC employees and housing advocates.

“I do not believe we, the citizens of Baltimore, should be privatizing our public housing because that’s dangerous,” said Jeff Singer, retired executive director of the nonprofit Health Care for the Homeless. “We should not use our public housing authorities to create profits for private developers.”

Wallace, a landscaper for HABC properties, said the union has several outstanding questions about its member’s employment future under RAD. 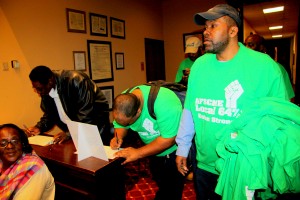 Union members jam the Council chambers, saying they felt they had been kept in the dark about the privatization plan. (Photo by Fern Shen)

Awaiting a response were not just Wallacebut a throng of other AFSCME members who packed the City Council chamber for the hearing wearing green T-shirts.

“I know there’s anxiety about this issue,” Graziano said. “I know we owe people more information and we’re going to give it.”

The commissioner outlined how housing officials applied last October for inclusion in the HUD pilot program. It allows for 60,000 public housing units across the U.S. to be sold to private developers, who would rehab the properties in exchange for perks that include rental subsidies and low-income tax credits.

In total, 4,150 units of public housing would be privatized under RAD in Baltimore – and about $10 million of the expected $27 million earned by HABC in “developer’s fees” under the sale and financing contracts would be returned to HABC to spend on other public housing sites, the commissioner disclosed at the hearing.

Included in the plans for Phase 2 of RAD, to take place in 2015, is $27.6 million in spending to rehab of about 184 units of scattered site public housing units, which include vacant and dilapidated structures owned by HABC throughout the city.

Ten developers, many of whom are already active in city-sponsored low-income housing, have been chosen by HABC to buy mostly high-rise projects in the first phase of RAD.

Prior to the hearing, a group of housing advocates met with Graziano to discuss RAD and the impact the fast-moving program could have on tenant’s rights, admission and selection criteria of future tenants in the privately-owned buildings, and housing affordability in the RAD properties.

Advocates said they have requested a written copy of a letter Graziano told them he sent to the U.S. Department of Housing and Urban Development (HUD) seeking permission to require the new owners of the high rises to fill vacant units with those on the HABC public housing waiting list, which currently numbers more than 28,000 people.

The advocates have questioned whether current and future residents will be able to use federal housing statutes as protection from grievances against the new private owners.

Others at the hearing said they wanted written guarantees that rents would not rise under the new owners.

Graziano said the basics of the RAD program called for a 40-year commitment to affordable housing by the new owners. He said that federal budget cuts over the past decade had sliced into capital improvement funds needed for upkeep at the developments, amounting to a “disinvestment” in public housing locally.

Residents who live in the RAD-targeted developments will be eligible to receive a Section 8 housing voucher two years after the RAD program takes over in their buildings, Graziano told the committee.

Overall, close to $30 billion is needed to modernize and repair most public housing buildings and units in the U.S., he said, citing data from the Council of Large Public Housing Authorities. With slim chances of that funding being committed by Congress, the RAD pilot program was launched in 2011 by the Obama administration.

Speaking of the city’s reasoning behind the privatization effort, Graziano said, “This is not a reflection in any way of the job our employees do every day. They hold it together with bubble gum and band aids.”