When it comes to raising campaign cash, the quietest man on the City Council, William A. “Pete” Welch, looks outside the box.

Over 95% of the $24,900 Welch reported raising last year came not from his own constituents, but from people who can’t vote for him because they live outside his West Baltimore district.

A definite pattern can be seen if one reviews his latest campaign disclosure records. Two dozen residents in the district, which includes Sandtown, Harlem Park, Rosemont, Millhill and Hollins Market, paid the $30 minimum for fundraising tickets last year.

At the same time, tickets amounting to $200, $500, $1,000 or more were purchased by liquor store owners, lobbyists, developers, a prominent strip-club manager, a video gaming supplier and a tire recycler.

These contributors propelled Welch, who represents the poorest and most physically dilapidated Council district in Baltimore, to 5th place in terms of dollars raised among the body’s 14 members, The Brew’s review of fundraising records shows.

That’s quite an accomplishment for a legislator who rarely speaks at Council meetings and has a reputation as a no-show at committee hearings. He succeeded his mother, Agnes B. Welch, as the 9th district’s representative in 2011. 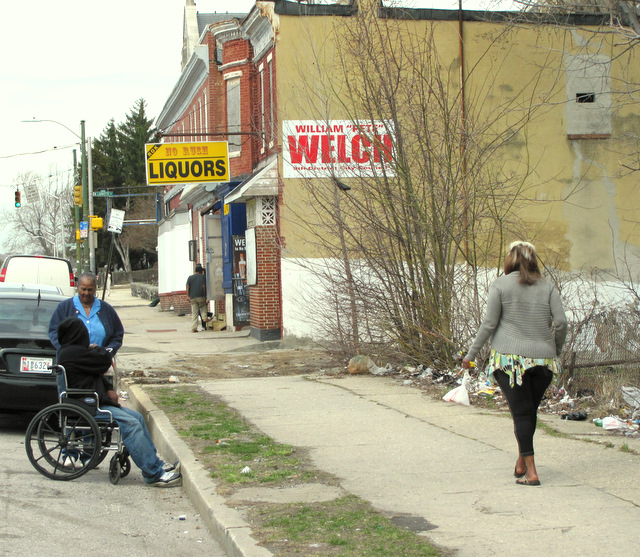 Upon his appointment to the City Council in 2011, Welch said one of his top priorities was to rejuvenate Poplar Grove Street. Here is the 800 block featuring the No Rush Liquor Store on Tuesday. (Photo by Mark Reutter)

Welch did not respond to multiple emails and phone calls seeking to gain a perspective on his fundraising.

According to the report he filed with the Maryland Board of Elections, the bulk of his funds comes from people vested in his district’s few remaining manufacturing businesses and its plethora of liquor stores and bars. (Welch was a Baltimore City Liquor Board commissioner between 1997 and 2003, a period when he pleaded guilty to second-degree assault and discharging a firearm.)

Last year, the company gave $4,000 to Welch – the maximum individual contribution over an election cycle – at a fundraiser held at Mo’s seafood restaurant in Little Italy.

This was in keeping with the company’s generosity to both Welch and his mother amid years of controversy where the tire company was criticized by the West Baltimore community for storing mountains of tires and tire shreds. 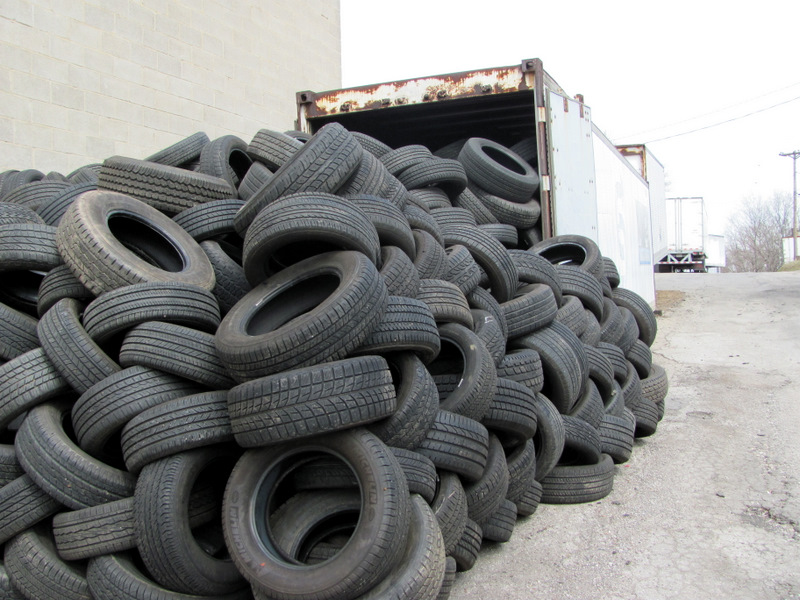 Tires from Emanuel Tire were piled high on Moreland Avenue on Tuesday, while hundreds more were stacked up against the historic St. Peter’s Cemetery a block west. (Photos by Mark Reutter) 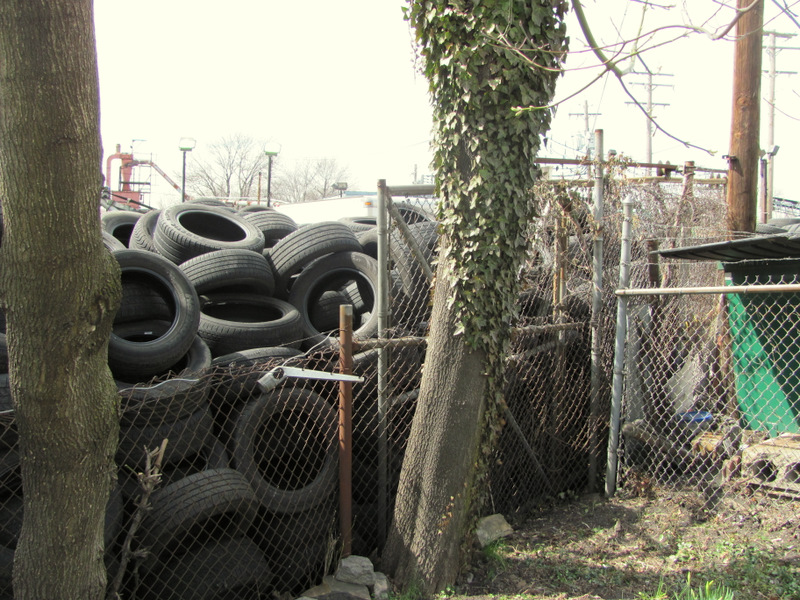 Emanuel Tire contributed $2,000 to Agnes Welch during her last Council campaign in 2007.

It then transferred its allegiance to her son when he was appointed in her place, pouring $3,500 into his 2011 election. 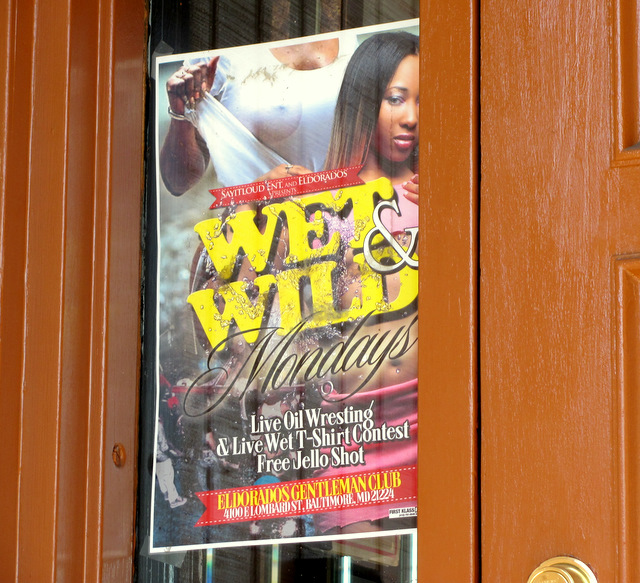 One of Welch’s biggest backers is Four One Four, a corporation formed by Kenneth A. “Kenny Bird” Jackson.

A convicted felon turned businessman whose life inspired the character, Stringer Bell, in David Simon’s HBO drama “The Wire,” Jackson has been involved with the Eldorado strip club since Welch was a member of the Liquor Board and the club was located in West Baltimore.

Four One Four contributed $700 for Welch last year. The corporation’s address is the Eldorado Club, which is now located at 4100 E. Lombard Street in Highlandtown.

Tax records show that the building is owned by K.A.J. Enterprises, whose resident agent is Kenneth Jackson. The company is currently listed as “forfeited” in Maryland records. Attempts to reach Jackson, who has managed the club for his mother, Rosalie, were unsuccessful.

Another big giver last year was John Zorzit, a video slot machine operator who settled a federal civil forfeiture action against his company for $1 million in 2010.

Federal prosecutors originally charged that 17 properties and 14 business bank accounts controlled by Zorzit were the proceeds of an illegal gambling operation that netted the businessman $18 million between 2003 and 2006. 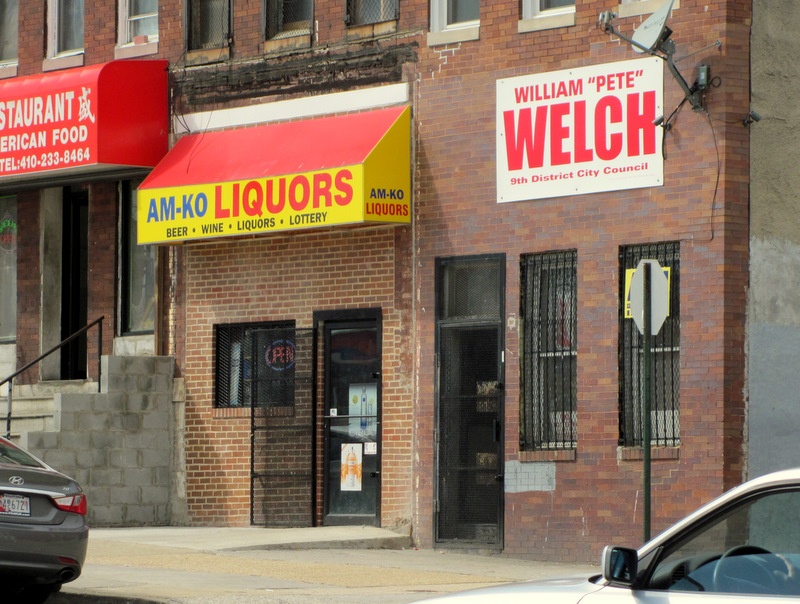 Welch’s name is splashed across his district. This sign is above the Am-Ko Liquor Store at 2800-02 Edmondson Avenue. (Photo by Mark Reutter)

(The video slot machines located in bars and liquor stores are legal for amusement purposes, but prosecutors alleged that the players would bet money on the slot machines. Zorzit has said his now-dissolved company, Nick’s Amusements, operated entertainment games.)

Zorzit did not respond to The Brew’s emailed request for comment.

Other liquor-related contributors to Welch include Frank D. Boston III ($500), a lawyer-lobbyist retained by beer maker MillerCoors and the Baltimore Licensed Beverage Association, and Stanley S. Fine ($250), who represents CBAC Gaming, the consortium building Horseshoe Casino Baltimore that will host numerous bars and restaurants for gamblers.

Prominent among the entities contributing cash last year to the councilman was Harbor Point Development. The group purchased two $250 tickets to Welch’s Little Italy fundraiser days after he (and 11 other council members) voted to approve Harbor Point’s controversial $107 million in TIF tax incentives. 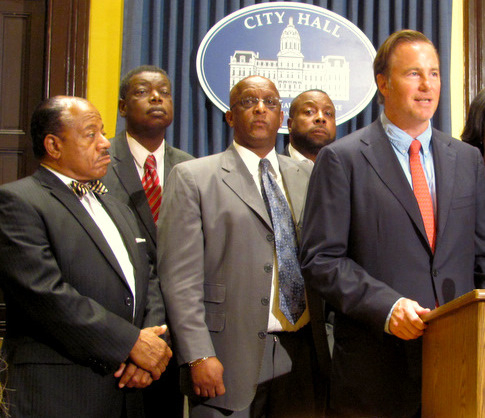 Welch stands with other council members as Michael Beatty thanks the Council for supporting his $107 million TIF tax incentive request for Harbor Point last September. (Photo by Mark Reutter)