The Rawlings-Blake administration has agreed to pay as much as $200,000 to relocate utility lines that interfere with the bakery distribution center that John Paterakis wants to build in East Baltimore.

The agenda for this week’s Board of Estimates meeting discloses the spending item as part of a funding agreement between the city and Hollander Ridge Distribution Center LLC, a wholly-owned entity of H&S Bakery, which in turn is owned by the billionaire baker and real estate developer.

Last week, Paterakis’ opposition to the location of the Central Avenue Red Line station  – on grounds that it obstructed his development plans in Fells Point – led to the decision by the Maryland Transit Administration to relocate the station.

The revered and feared “bread man” of local politics with close ties to mayors and governors since the 1960s, the 85-year-old businessman wants to convert his brown-painted warehouse on Central Avenue to a high-end retail and apartment complex – and to build a new distribution complex at the Hollander 95 Business Park in Cedonia. 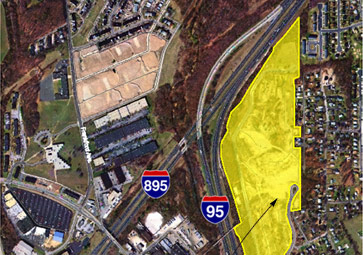 The Hollander 95 Business Park, where H&S Bakery plans to relocate its distribution center, is shown in yellow. (sixink.com)

The project is part of his plans to extend the high-rise Harbor East development to underutilized land under family control along Central Avenue and Eden Street.

Last December, the Department of Public Works entered into an agreement with Paterakis to relocate utility lines at the 2.8-acre site that he purchased for the new distribution center along 62nd Street.

The latest agreement transfers up to $200,000 through the “East Baltimore Industrial and Commercial Development Fund” to pay for the work, including architectural and engineering expenses.

The agreement calls on Paterakis to maintain the current number of employees – 70 – at the new facility.

For every decrease in employment under 70, his company would “owe” the city $2,857 in penalties. That means that if employment drops to zero at the distribution center, Paterakis would owe the city $199,990, or $10 less than the subsidy he is expected to receive when the Board of Estimates meets on Wednesday.

The period for keeping the employment level at 70 would last for six months, between March and September of next year, according to city documents.