People displaced by Wednesday’s wall collapse, meeting Sunday in a closed-door session with Mayor Stephanie Rawlings-Blake and representatives of CSX, were told that the city will be stabilizing the wall, at the rail company’s expense.

“Residents were very reassured to hear the news, particularly that Whitman Requardt & Associates LLP would be doing the design work,” said Sharon Guida, a member of the Charles Village Civic Association board, who attended and took minutes. “Whitman Requardt used to be here at 2300 St. Paul [Street] and they have been very active in the community.”

The plan, she said, is to begin as early as this week installing steel columns to stabilize the steep slope where a retaining wall collapsed amid heavy rains last week, bringing cars, the sidewalk, a strip of the roadway and the retention wall crashing onto the CSX train track below. 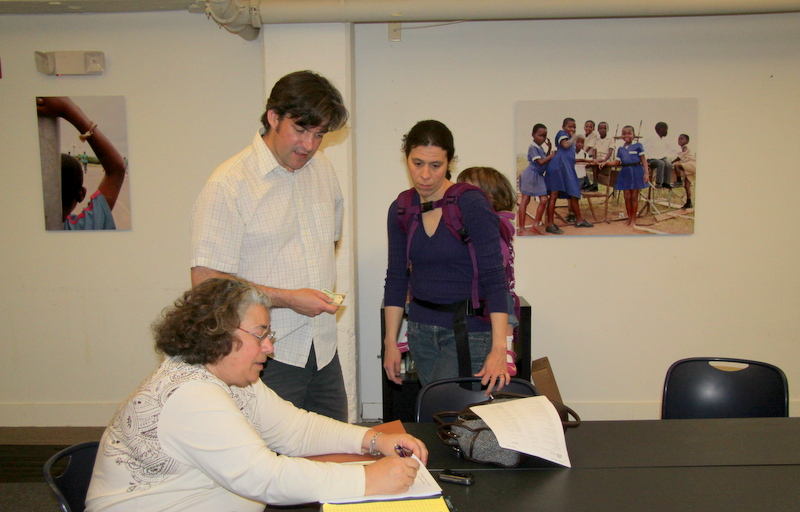 Sharon Guida recorded a donation to the displaced families made by Stephan Lieske and Laura Sinche, who live near the site of the wall collapse. (Photo by Fern Shen)

“It’s my understanding that CSX would be paying for this and the city will be in charge of getting it done,” Guida said.

As for what and who is ultimately responsible for the collapse – which displaced families, destroyed cars, required the evacuation of 19 homes and drew national attention to the city’s infrastructure woes – the mayor was leaning over the weekend toward attributing it toward the weather.

Speaking to WJZ-TV, she said the investigation is continuing but that the street was inspected a year ago and found to be stable.

“We know what happened between that time and this on top of the ground,” Rawlings-Blake told WJZ. “We know we had a ridiculously relentless winter and a hurricane level of rain. And we want to know, did that have an impact?’”

At the site meanwhile, standing water remained pooled near the track, even though the rains stopped days ago. Residents have been talking about persistent problems the railroad has had with water leaking into the cut and forming puddles on the rail right-of-way. For years this leaking has persisted, prompting CSX to install pumps to get rid of the standing water.

The subject came up at a potluck supper Sunday, organized to support the displaced families. Neighbors were offering not just financial support but more stories about their warnings, to the company and the city, that the buckling street was an accident waiting to happen.

They gathered at nearby Miller’s Court, bringing pizza, stir-fried tempeh-and-vegetables, samosas, soft drinks – and a decent selection of red and white wines.

Living two doors down from the collapse, Stephan Lieske and his wife Laura Sinche said they saw the increasingly cracked street, tipped sidewalk and bulging wall as they worsened over months and complained to CSX.

Yesterday, the couple noticed the sign about the “Community Supper” taped on a fence at the site of Wednesday’s collapse and were among the first to make a donation. 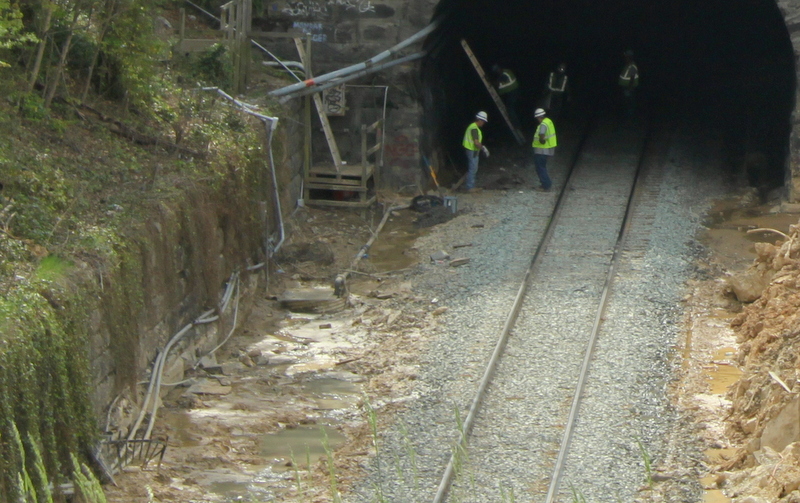 There has been a persistent problem with standing water in the railroad right-of-way. (Photo by Fern Shen)

“It was obviously negligence,” Sinche said, standing with daughter Hannah strapped in a backpack while her husband handed a 20 dollar bill to Guida. (Kelly Cross, president of the Old Goucher Community Association, and Guida, of the Charles Village Civic Association, were both on hand to supervise the covered dish “community supper.”)

Lieske, who has lived on St. Paul Street for three years, said he noticed changes in the wall and street and persistent cracks in the asphalt, exposing brick  “and obviously letting water get down int here”  and wrote a letter of concern to CSX in early March.

He received a reply, Sinche said:

“They said it was structurally sound and that it was a city water issue.”

Guida said although the city has found shelter and offered food vouchers to the displaced residents, they still need help.

“Some of them are self-employed and really struggling,” she said.

The money raised on Sunday will go to “It Takes the Village,” the fund set up through the Charles Village Community Foundation on behalf of the displaced.

She said donations can be made by check or money order
made payable to “Charles Village Community Foundation, Inc.” with “It Takes The Village” in the memo section, Guida said. They should be delivered or mailed to:

She also said that Sweet 27 Restaurant, of Remington, is donating 30% of its food receipts from May 5th -7th to the “It Takes The Village” fund. The restaurant is located at 123 West 27th Street. (At the corner of Howard and 27th streets.) 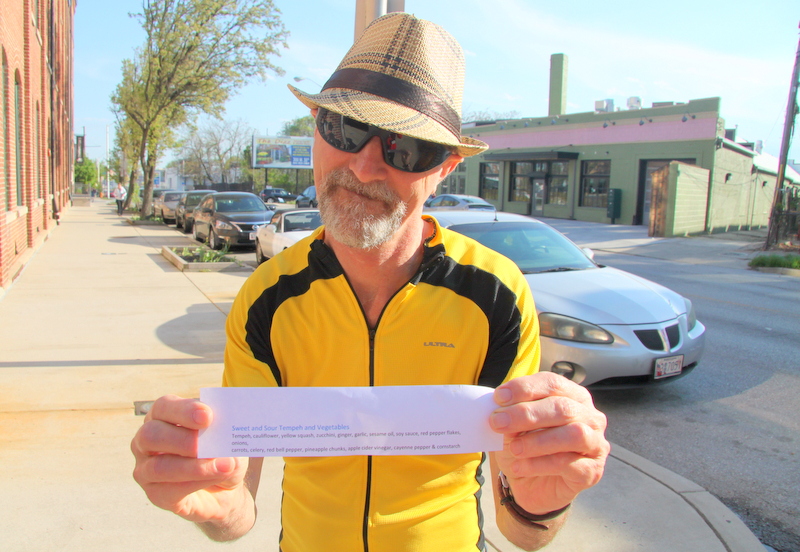 Tempeh to the rescue! Michael Tew with the ingredients of the vegetable stir-fry he brought to the potluck for displaced 26th Street residents Sunday. (Photo by Fern Shen)

This comment from CSX came in after publication. We include it here in full:

“CSX attended a meeting with the Mayor, state and local officials, and area residents in Baltimore Sunday. The meeting was productive with constructive dialogue and the exchange of important information among all attendees. We would like to thank Mayor Rawlings-Blake and other officials for their leadership in addressing this situation, which has created a significant hardship for those who are out of their homes. CSX is committed to working with the City of Baltimore during the reconstruction effort and to assisting community residents with security and other concerns.”
– Bryan Rhode, CSX Regional Vice President, State Gov’t and Community Affairs