City Hall’s most interesting revolving door – the chief of staff seat in the office of Mayor Stephanie Rawlings-Blake – has turned once again.

For the fourth time in a little over four years, the mayor has replaced her top staffer – this time with one of her closest friends and advisors.

For those of you keeping official score, it’s out with Alexander M. Sanchez and in with Kaliope Parthemos.

Sanchez was in the job for almost two years. The former secretary of the Maryland Department of Labor, Licensing and Regulation, he replaced Peter O’Malley, the younger brother of Maryland Gov. Martin O’Malley, as Rawlings-Blake’s chief of staff on May 16, 2012.

In a press statement at the time of Sanchez’s hiring, Gov. O’Malley praised his former staffer, saying his contribution to the city’s future would be valuable: “Mayor Rawlings-Blake is getting a very capable, talented, and professional leader that will help drive progress in Baltimore City.”

Yet Sanchez’s profile at City Hall has always been that of a man in the shadow of the mayor, showing up at meetings, but offering no public input and appearing to always be in the midst of a very bad day.

Parthemos, on the other hand, has consistently held a high profile. 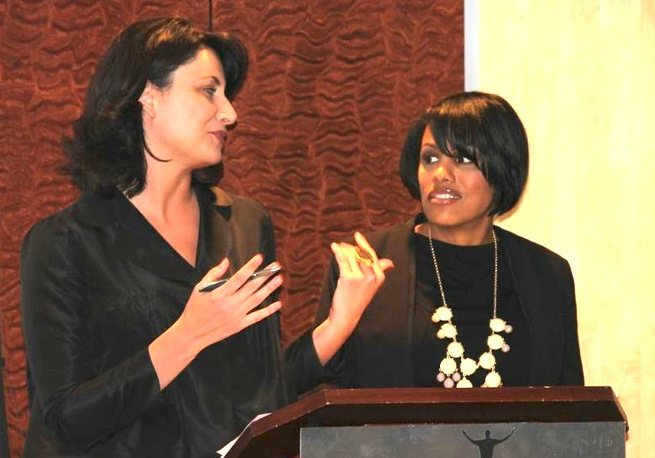 Parthemos and Rawlings-Blake share the podium at the Greek and African-American Alliance Reception at the Reginald F. Lewis Museum last year. (Citybizlist)

The grade school friendship she formed with Rawlings-Blake has led her to an array of positions as Rawlings-Blake’s career has moved up the ladder at City Hall.

She is currently deputy chief for economic and neighborhood development, and was deputy chief of staff when Rawlings-Blake was president of the City Council.

Sanchez was paid $175,000 a year as chief of staff, according to city records, while Parthemos’ job as deputy development chief paid $150,000.

Other staffing changes announced today included the elevation of Kimberly Morton, currently deputy director and chief of staff in the Department of Public Works, to replace Kym Nelson as deputy chief of staff in the mayor’s office. (Nelson was brought over to City Hall from Labor and Licensing when Sanchez assumed his position for the mayor.)

“I would like to thank Mr. Sanchez and Ms. Nelson for their service in my administration as we have worked to continue growing our city, eliminate blight from communities, and reduce violent crime,” Rawlings-Blake said this afternoon.

“As we move forward with my agenda to grow Baltimore City by 10,000 families through safer communities, better schools, and property tax reduction, my senior team will bring more than five decades of experience in local government and senior level management to City Hall,” her statement read.