The highlight of Baltimore’s developer-politician social season – the Maryland Party in Las Vegas– included a spectacular display of fireworks, cannon fire and a paean to the Star Spangled Banner on Monday night along Sunset Strip.

Held during the International Council of Shopping Centers convention in Vegas, the Maryland Party has become the one of the most-sought-after events among the 35,000-plus convention-goers.

This year’s festivities were held at the Encore Beach Club at the Wynn Resort and featured Mayor Stephanie Rawlings-Blake who “held court – mostly on her feet, dancing – at a large banquette near the main bar’s entrance,” according to the Baltimore Business Journal. 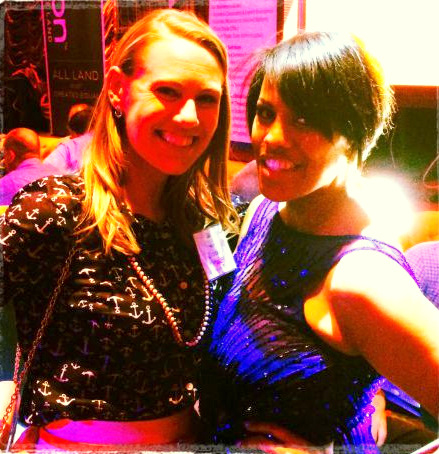 The mayor parties with a representative of a Glen Burnie building services company. (Brooke Albano Facebook)

The mayor flew to Las Vegas on Sunday (a day after Preakness) and is due back tomorrow, where she will make her sole scheduled public appearance this week before the Greater Baltimore Committee on Thursday night.

The elected officials have described the convention as a golden opportunity for them to rub shoulders with executives from national retail chains and promote Baltimore to shopping center developers.

Rawlings-Blake has said that encouraging national grocery chains to locate in the city’s “food deserts” is her top priority. She reportedly conducts dozens of meetings with real estate developers during her stay in Vegas.

Other than the private tête-è-têtes, the convention offers some rather dry fare for real estate professionals and professional politicians.

Some examples tweeted out by the ICSC were a practicum on “Extending the Life of Your Asphalt Payments [sic],” a lecture on “Connecting with Consumer Pass Points” and a subject apparently dear to shopping center architects, “Up on the Roof: Out of Sight, Out of Mind?”

Thus the importance of the Maryland Party to put some Sin City sizzle into the event.

The mastermind of this “legendary” party – and dispenser of its prized admission tickets – is Howard L. Perlow. An Owings Mills title insurance executive and avid contributor to the mayor (he and an affiliated company paid $6,000 into her campaign coffers last year), Perlow has been the party’s main organizer for years.

His family firm, Residential Title & Escrow, is a woman-owned minority enterprise that does business with the city and surrounding jurisdictions.

This year’s event was paid for by Cordish Companies, St. John Properties and other corporate sponsors as well as by the Maryland Department of Business and Economic Development. The agency, which forked out $7,500, says the party pays dividends by promoting Maryland as a good place to do business.

This video of the festivities was posted by BBJ’s Kevin Litten. After the fife and drum corps comes a crab bucket.