Is Dundalk ready for its close-up?

The venerable working-class community in eastern Baltimore County – mocked by radio dj’s as “the Redneck Riviera,” lauded by residents as “humble” and “salt-of-the-earth” – was in the spotlight as a high-gloss marketing campaign was unveiled yesterday.

That theme is to be the centerpiece of three happy-hour events planned for local watering holes this summer.

“We are launching an active campaign to challenge people’s expectations of what they are going to find here,” said Amy Menzer, executive director of Dundalk Renaissance Corp., a nonprofit formed 13 years ago to promote the area that has long been a butt of local jokes.

Menzer described the new re-branding campaign at a gathering of locals and reporters at the Sparrows Point Country Club, ex-watering hole of Bethlehem Steel Corp.’s top brass. (Once the world’s largest steel mill with 30,000 employees, Sparrows Point closed two years ago and is now undergoing demolition.) 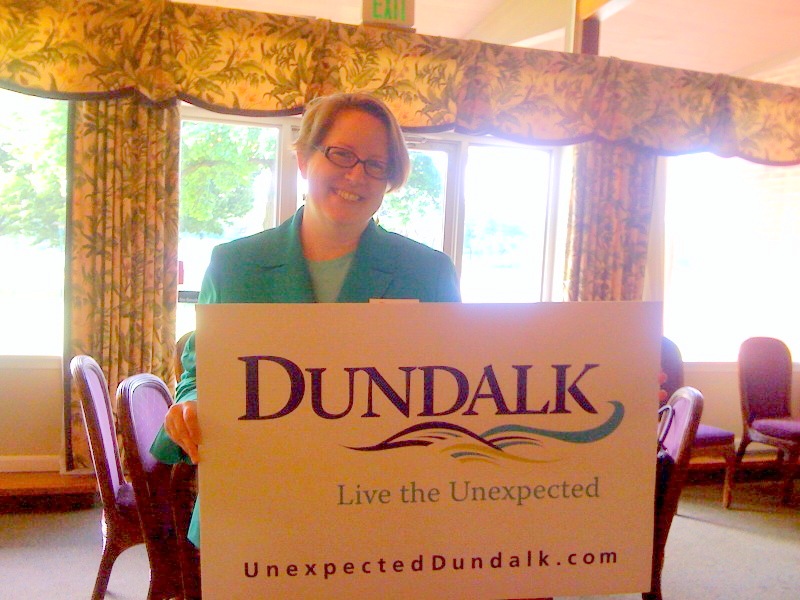 Amy Menzer, executive director of the Dundalk Renaissance Corp., shows off the new logo and catchphrase. (Photo by Melody Simmons)

The push to overcome “negative stereotypes,” as she called them, will be supported by incentives in the form of $5,000 housing subsidies available to new middle-income residents, thanks to state and county grants, she said.

They plan to offer the opportunity to win these “Golden Key” grants to 30 new home-buyers at a Sept. 27th Dundalk Housing Fair, as well as “work where you live” incentives from local businesses. Attendees will be able to speak one-on-one with real estate agents, mortgage lenders, housing specialists and renovation experts, as well as check out Dundalk’s neighborhoods and tour for sale homes on four narrated bus tours.

Their new website, www.unexpectedDundalk.com, has information on the event as well as photos of the Dundalk they are promoting: a smiling couple planting flowers in front of their home, a child jumping into the water next to boats, a group of people eating crabs .

Hired by Dundalk Renaissance to lead the image makeover is Jody Landers, the former member of the Baltimore City Council, executive director of the Greater Baltimore Board of Realtors and a one-time candidate for Baltimore mayor.

With 43 miles of waterfront property stretched over five peninsulas and a 4th of July parade that is legendary, Landers said, Dundalk is primed for discovery. The community has several neighborhoods that include historic Turner Station, St. Helena, Fort Howard, Sparrows Point and Holabird.

The gem of the community, however, is its waterfront, Landers said.

From Beth Steel to Amazon

Dave Janiszewski, president of the DRC, said he purchased his home in Dundalk for $187,000. Located on a double lot, he pays $2,200 in county taxes annually.

“This is a steel town associated with hard work,” Janiszewski said, referring to the shuttered Beth Steel plant that used to be the economic and social anchor of the community in its heyday half a century ago.

Today, Amazon is building a 1 million square foot distribution plant five miles away from Dundalk, and a 346,000-square-foot warehouse is also planned to be built next door. 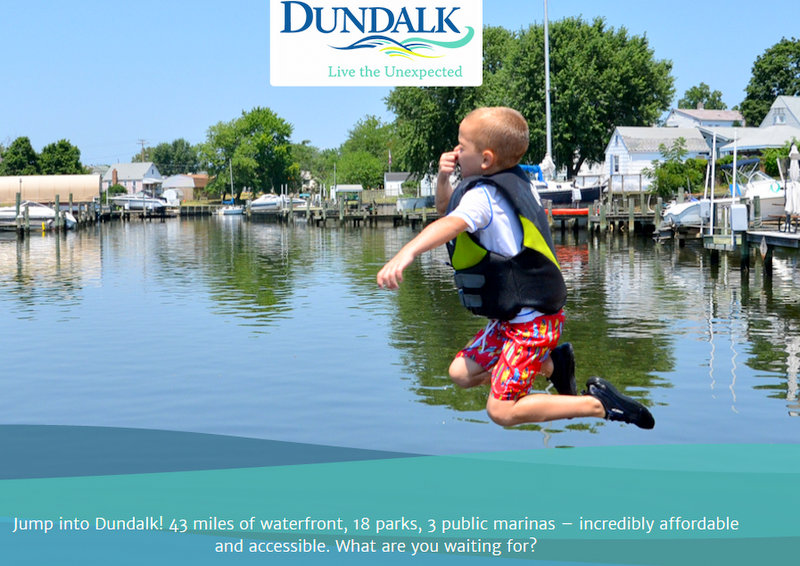 “Jump into Dundalk!” An image from unexpecteddundalk.com.

Baltimore County officials have unveiled plans to build a new high school and elementary school in the area.

Other mainstays, like Herman’s Bakery and the Double T Diner, also attract regulars who crave a slice of life that seems frozen in time from the 1950s.

“While we don’t have a Target or a Panera, I take pride in running my errands and having the waterfront here,” said Stacey Dawes, a former Harford County resident who purchased a waterfront home in Dundalk in 2003 with her husband and is raising two children there.

“It is charming and very Norman Rockwell,” Dawes said, of the community’s hub, located near North Point Boulevard and Wise Avenue.