It happened fast, and the Liquor Board regulars in the audience yesterday – plus the community leaders and public interest lawyers who advocate for them – were flabbergasted.

The case involved the Dubai nightclub, at 202 East Redwood Street, which was seeking a “hardship extension” in order to keep their license, which was due to expire.

Newly appointed Liquor Board Chairman Thomas Ward wanted to know just two things: was the licensee here, and when was the request filed?

“No show. The request is from April. Denied,” Ward said, glancing down at the lengthy docket before the three-member panel. “What’s the next case?”

“Did I hear that right?” whispered Rebecca Lundberg Witt. “Did he just kill that license?” the Community Law Center’s watchdog blogger on liquor issues asked.

On its face, yesterday’s denial might seem unremarkable. By law, a license expires if the business has been out of operation for 180 days. But under the previous chairman, licenses that should have expired had been allowed to live on and on – for three or four years or more.

No longer, said Ward. The new chairman didn’t use the term “zombie licenses,” as Witt and others have, but he indicated that they pretty much deserve a stake in the heart.

“This business of automatic hardship cases, it’s not in the code I don’t know where that came from. That has been going on. But it’s not going to keep going on,” he said. “People are going to have to stop shopping around and trying to find a berth for these licenses. They’re either going to have to open. . .  sell it or lose it.” 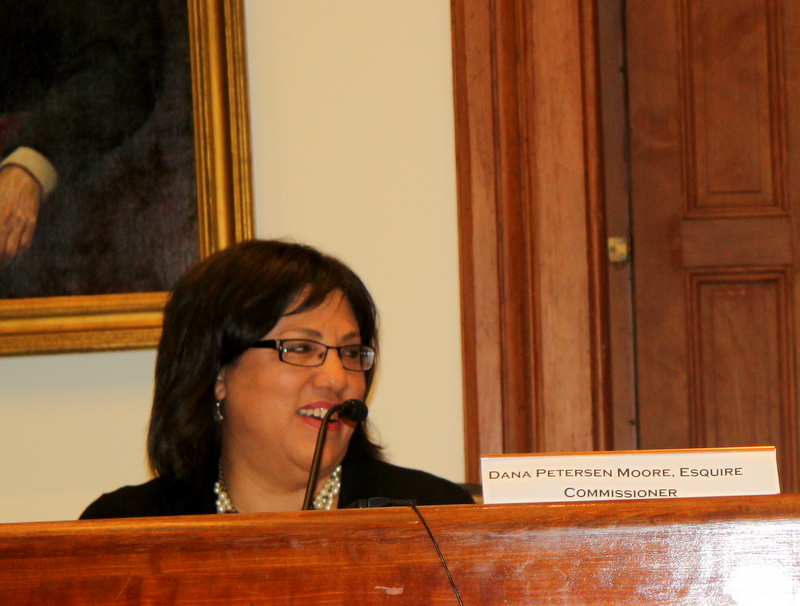 It was just one of the instances yesterday where Ward (appointed by Gov. Martin O’Malley, along with fellow commissioner Dana Petersen Moore) demonstrated how he planned to interpret city liquor laws – in most, but not all, cases, more in favor of communities.

“What a refreshing difference,” marveled Joseph T. “Jody” Landers III, who represents the Lauraville Improvement Association in another Liquor Board case.

“He went out of his way to hear all sides,” Lander said after the hearing. “I’m feeling like the new chair is actually listening. And Dana was right in sync.”

Ward’s first day on the job drew all sorts of spectators eager to check out the 87-year-old retired judge, who has declared that his charge from Annapolis is to fix the patronage-plagued Liquor Board.

Among those who popped into Room 215 in City Hall to see him in action were City Councilwoman Mary Pat Clarke, planning consultant Al Barry, tour-guide Zippy Larson and a city employee who asked to be cropped out of any news photos (“I’m supposed to be at work!”). 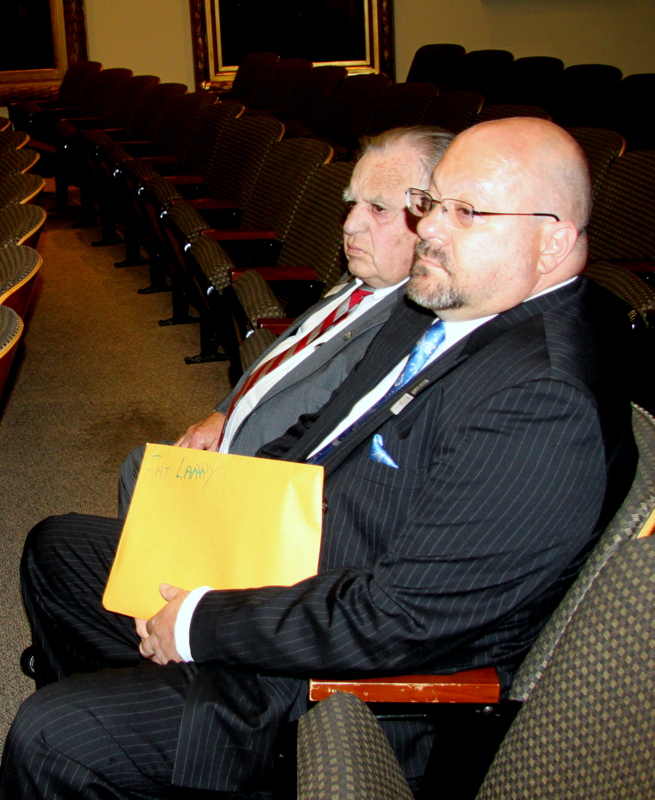 Lawrence Davidoff, the licensee for Fat Larrys, and his attorney yesterday. (Photo by Fern Shen)

Former chairman Stephan W. Fogleman showed up as well, orchestrating a gavel-hand-off photo with Ward (which he then tweeted) and accepting condolences from the crowd over his loss in Tuesday’s election.

After seven years as chair, Fogleman resigned in April to accept an appointment as a city Orphans’ Court judge, but was unable in the primary to retain the seat.

“After seven years, it’s enough,” he told one person.

Yet @BaltoBeerBaron clearly can’t seem to give up some aspects of the job. After leaving the hearing room, he continued his practice of tweeting results, presumably based on watching the proceedings via cable TV.

Chances are slim to none, it’s safe to say, that Ward will continue the social media tradition. The retired Circuit Court judge and ex-City Council member stopped yesterday while reading a document aloud and asked, “A-P-P? What is that?”

“App,” someone explained to him. “Like on a smartphone.”

But Ward was razor-sharp in his conduct of the meeting, remembering details and dates, cutting off extraneous testimony, honing in on the core conflicts and urging combatants to settle differences on the spot.

“You chat. Work this out. Ten-minute break,” he told Masopust and Stephanie Kuzma, licensee of Exile on Broadway in Fells Point. “Come back after you do it.” (They did it.)

“It doesn’t seem to me, if you two talked, that you would be that far apart,” Ward told the parties in another case – Landers and the licensees seeking to reopen the Clifton Pleasure Club, at 2803 Grindon Avenue, with a new generation of members.

Landers was before the board representing the Lauraville association seeking reconsideration of the board’s decision last month under Ward’s immediate predecessor, Interim Chairwoman Elizabeth C. Smith.

“She just cut me off,” Landers had complained.

Ward didn’t, allowing Landers to state his concerns about the hours the establishment would be open, its impact on a church and the residential area, and the conditions the community association would like to impose.

The licensee protested, growing huffy, saying the club had never had a problem, veering off to a dispute with Landers about the group’s finances.

Ward cut him off. “Sir, what are your objections to guidelines?”

The club’s attorney, Melvin J. Kodenski, raised several points, including the fact that City Councilman Robert Curran had submitted a letter on the club’s behalf, but was unsuccessful in getting the board to quash Landers’ request for reconsideration.

“What do I know around here anymore?” the veteran Liquor Board attorney muttered at one point.

A community group that came away even more satisfied was the New Auchentoroly Terrace Association. Its president, Barbara Anderson-Dandy, clearly made an impression on Ward with her detailed plea regarding 2300 Orem Avenue, “a nuisance store since 2000.”

At an April hearing, Anderson-Dandy and her group had testified about a number of problems at the establishment, including specific instances of drug dealing.

The Liquor Board (the old one) had renewed the license, but suspended it for six months. With that decision under challenge in Circuit Court and the store still open, there was a request before the new board to transfer the license to another set of owners. 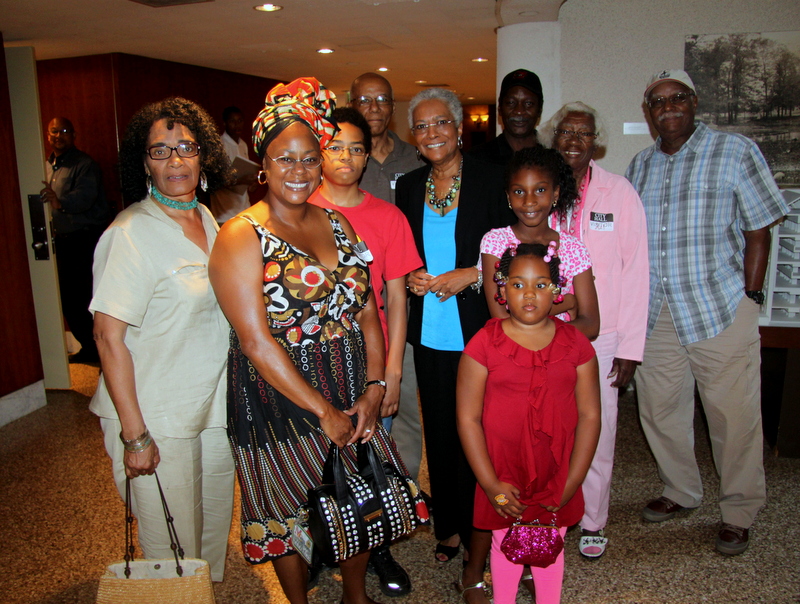 Barbara Anderson-Dandy (in blue blouse) and others from the New Auchentoroly Terrace Association were pleased with yesterday’s results. (Photo by Fern Shen)

The community strongly opposed that, she said.

Siding with Anderson-Dandy, the commissioners denied the request.

Ward then asked, “What else do you want the Liquor Board to do?”

“It seems to me you have a problem,” he continued, noting that city inspectors were available to assist them. Later outside the hearing room, a beaming Anderson-Dandy said she was “very pleased” with the decision.

Some of the people she came with, however, suggested she could have gotten more. They told her what they thought Ward was hinting at: “He wanted you to ask him to shut them down!”

Ward turned several times to his fellow commissioners (“what does my board think?”), something several spectators found striking. The commissioners mostly deferred to him, though Moore did cast a sharp eye at the application for a new license at 1100 Fleet Street for Cava Mezze.

She said many of the signatories on the petition in favor of the establishment were employees of the law firm, Rosenberg Martin Greenberg, with the firm’s downtown address provided.

Hecker said the law firm’s employees were “prospective customers” since the new restaurant is nearby. (It’s a mile away from the law office.)

“It is not persuasive for me to have a petition signed by members of your law firm,” Moore said. “For me, it lessens the application.”

Hecker replied, “I appreciate that.”

(The board did, however, go on to approve the  new license they sought.)

Not all of the decisions yesterday broke the community’s way.

The biggest blow came with the 35 North Potomac case, the subject of a nearly four-hour hearing last month, with Patterson Park residents objecting passionately to the license transfer.

Yesterday, the decision was to be announced, but by a board with two members who had not heard the testimony. 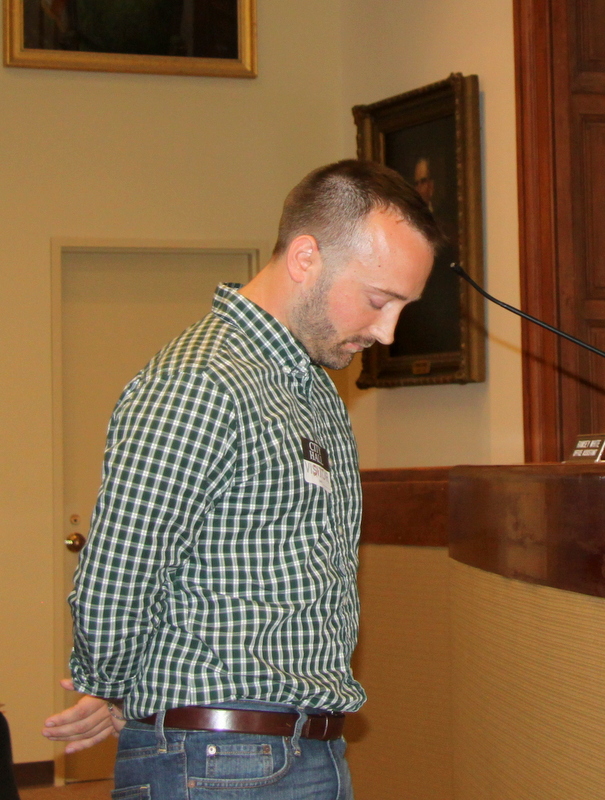 A disappointed Patrick Lundberg learns that his community’s case would have to be re-heard by the new board. (Photo by Fern Shen)

“This board does not have the authority,” said Kodenski, representing the licensee.

Ward and his fellow commissioners agreed, ordering the case to be reheard before them on July 17.

“I know it’s a burden,” Moore said to him. Ward promised the full hearing transcript from May would be taken into consideration.

“I get it that it’s a time of transition, but I am just really disappointed,” Lundberg said afterwards, recounting the months of paperwork, delays and preparation leading up to the May 15 hearing.

“No way are we going to be able to get that same kind of turnout and emotional testimony,” he said.

Lundberg’s peers from other neighborhoods, watching from the audience, agreed with the board, though they sympathized. “Ward handled himself well,” Corbin remarked, “but he had no other choice.”