One step forward and another step back – that’s the taxing situation for Baltimore City residents at the start of the new fiscal year.

This means the property tax bill for the “average” home assessed at $145,500 will drop about $130 – from $3,270 to $3,140 – in the fiscal year that began July 1. (That excludes the surtax assessed on homeowners and businesses in Special Benefit Districts.)

The Targeted Homeowners’ Tax Credit is only available for homeowners. The real property tax rate for rental properties and businesses will remain at 2.248.

On the other hand, a “typical” water and sewer bill for a family of four will increase by about $80 this year from $181 per quarter to $201 per quarter.

Another increase, also of 11%, is set for next July 1 under a fee schedule approved last year by Mayor Stephanie Rawlings-Blake and the Board of Estimates. This will make for an average quarterly water bill of $223, according to the Department of Public Works. (See table below.)For senior citizens who apply – and for poor residents who pass a household income means test – a water rate discount is available in the city. Residents are asked to call 410-396-5398 for information or an application.The increase in sewer rates is necessary to meet the terms of a 2002 consent degree with the Environmental Protection Agency (EPA), which banned the city’s historic use of local waterways for sewage overflows during storms.

The city is also pursuing a modernization program for its water infrastructure, which has resulted in numerous water main breaks in recent years, and has allotted more than $100 million for “smart” water meters and new customer billing software.

With the added revenue from the rate hikes, DPW promises to improve its oft-criticized customer service, develop proactive maintenance practices, cover the city’s open-water reservoirs with storage tanks, and accelerate the replacement of water mains, some dating back to the 19th century. 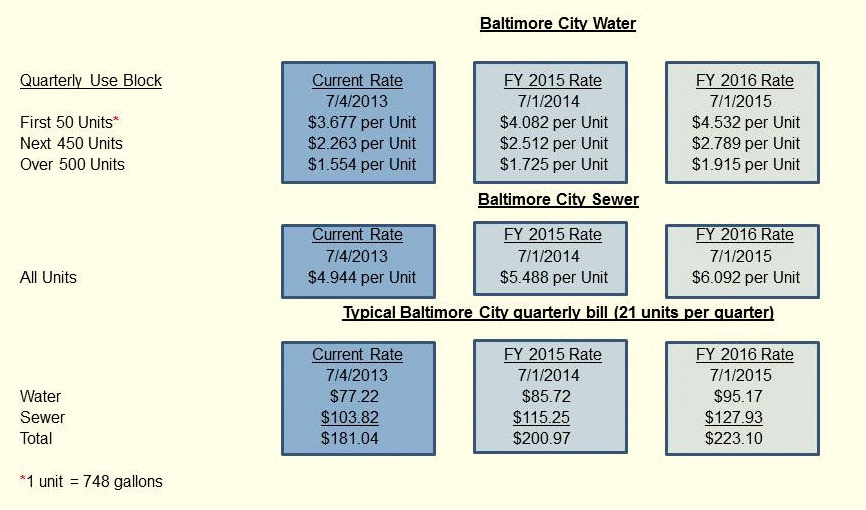