Today’s win by 1199SEIU in reaching an agreement with Johns Hopkins Hospital calling for higher wages is a textbook example of a sharply focused campaign that combined old-fashioned union organizing with modern social media.

Representing 2,000 janitors and service workers, the union turned the Hopkins “brand” as a world-famous medical center into a public relations nightmare for management.

Pounding away on the theme of “poverty pay” – of single moms relying on food stamps to make ends meet, for instance – it painted Baltimore’s largest private hospital as an institution that seemingly didn’t care about its non-medical “caregivers.”

The union used some time-honored labor techniques, including a surgical three-day strike in April and a mass rally at the Inner Harbor in May (with some participants bused in from D.C., Boston and Long Island).

But what may have turned the tide was the union’s deft application of Twitter, Facebook and other low-cost social media.

Painting a Picture of Haves and Have-Nots

On its website, hardshipathopkins.org, 1199SEIU posted videos of hard-pressed employees, released tax data on what it claimed to be the extravagant pay of some hospital executives, and related its historical connection to civil rights icon Coretta Scott King.

At the same time, a rapid-response team of organizers fed the media detailed email releases of the status of the union’s talks with management. 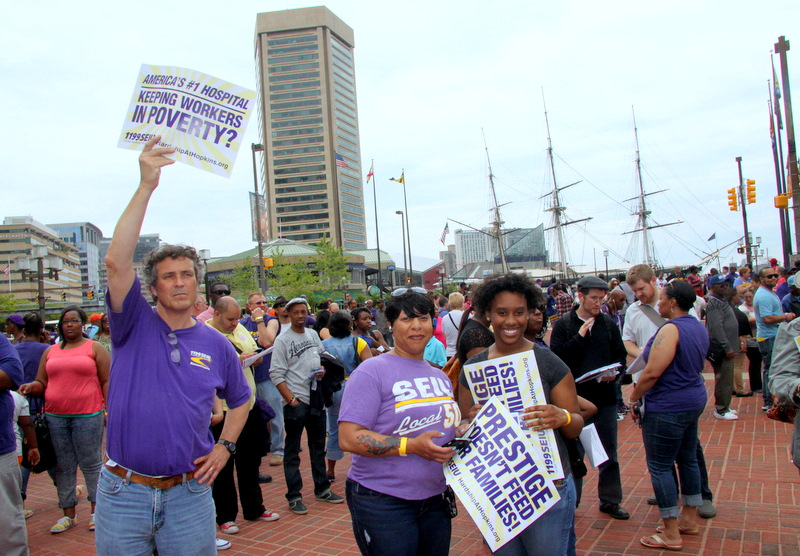 1199SEIU bused in people from D.C., Long Island and elsewhere to attend its Mothers’ Day March for Justice at the Inner Harbor. (Photo by Fern Shen)

Today, after four months of negotiations, Hopkins agreed to go more than halfway to meet the union’s demands.

While some employees won’t exactly be flush with cash – wages will remain as low as $13 an hour – they will be making more than the $12.25 minimum Hopkins had been offering.

The agreement came after Maryland Gov. Martin O’Malley asked for a “cooling-off” period to avert a second strike on June 27. (Baltimore’s mayor, Stephanie Rawlings-Blake, has maintained a low profile in the dispute.)

The two parties met last Tuesday and deadlocked over Hopkins’ “final offer,” which was nearly identical to its original offer in March, according to the union. The breakthrough came early this morning after the union met with management for more than eight hours.

In contrast to 1199SEIU’s media activism, Hopkins did little to influence or direct the flow of information about its wages or the “hardships” portrayed by the union.

Early on, the institution spoke of its duty to maintain financial discipline and referred, rather condescendingly, to SEIU’s membership as a small part of the nearly 20,000 people who work at the hospital. Any strike by service and technical employees would not hurt patient care, the hospital maintained.

Hospital President Ronald R. Peterson made his case in a stately op-ed, saying the institution “is striving to balance several different financial priorities within a finite pool of funds, to continue the kind of care people expect from us and to offer competitive compensation to all our employees.”

Otherwise, the Media Relations & Public Affairs office remained tightlipped, not disputing the union’s claims and telling The Brew and others that Johns Hopkins doesn’t negotiate with employees through the media.

Filling the silence, the union kept plugging away with videos, testimonials and embarrassing on-line posts with titles like “Hypocrisy at Hopkins” and “$1 Billion for Buildings.”

While Gov. O’Malley most certainly applied political pressure on the two parties to reach an agreement, the mushrooming cost of 1199SEIU’s Internet campaign on the reputational image of Hopkins was an equally compelling factor in this morning’s settlement.

The agreement is expected to be approved in a membership vote later this week.