Baltimore officials acknowledged today that they dropped the ball by failing to test 26th Street for structural defects, despite repeated citizen complaints over a 12-to-14 month period that the wall was cracking and liable to fall onto the CSX rail line below.

“There was no engineering survey performed on the wall or failing sidewalks by DOT or CSX,” the report, released this afternoon, said.

“There were only visual inspections performed by DOT and CSX,” using  personnel who “were not licensed professional structural or geotechnical engineers.”

The report also says, “There should have been more coordination by CSX and the City to identify the cause of the road and sidewalk collapse beyond a visual inspection.”

There were no injuries as a result of the collapse, which took place half a block from the Margaret Brent elementary and middle school about two hours after schoolchildren were dismissed.

Repairing the street and rebuilding the retaining wall will cost about $15 million, according to the latest estimates, to be split by the city and CSX Transportation.

According to the report, the city made temporary repairs after cracks and cave-ins were detected in the street and sidewalk, but never conducted “test drills” or other standard measures to determine the stability of the road’s subsurface.

The report says that the city Department of Public Works, using closed circuit cameras, inspected the roadway’s underground sewer and water mains and found no structural problems in the utilities.

According to the narrative presented as part of the four-page report, residents over the 12 to 14 months prior to the April 30 collapse had “repeatedly reported soil erosion, settlement, potholes, sidewalk caving and similar conditions along 26th Street between Charles Street and St. Paul.”

Residents have told The Brew that their reports of structural problems on the street went back much longer.

Councilman Carl Stokes, who represents the Lower Charles Village block, said residents had complained “for years” about the condition of the street and retaining wall.

More than a decade before, a similar retaining wall collapsed along the CSX-owned right-of-way. But today’s report had no information to offer about it.

“The city was unable to determine what prompted the major repair in 1998 to the wall located one block to the east on 26th Street between St. Paul and Calvert Street,” the report said.

(The location given is an error, since 26th between St. Paul and Calvert is the Margaret Brent school playground. The 1998 repairs were actually made three blocks away, at the corner of 26th and Guilford.)

The city said it will take various corrective actions to make sure that a similar failure does not take place in the future.

Among the new measures, the city has ordered an inspection of retaining walls and similar structures “in those areas affected by the recent flooding and heavy rains” and will hire consultants to perform structural inspections of aging infrastructure along CSX right-of-way, “with a goal of prioritizing areas of concern within the next 12 months.”

A major defect at the Sinclair Lane/Edison Highway Bridge over the same CSX line that runs below 26th Street was detected more than a year ago, which will likely result in a major cost overrun to be shared by the railroad and city.

Earlier this month, the Board of Estimates agreed to triple the inspection and “flagging” fees that the city pays CSX related to the bridge.

According to today’s report, city DOT will follow a new protocol when it gets citizens complaints of sunken sidewalks, curb lines or sink holes.

First, the agency will review “the most recent 12 months history of similar complaints within the same general block or localized area,” then conduct a field inspection if there has been three or more complaints at the site within a year, and, finally, have a “secondary investigation conducted by trained and qualified engineering professionals or consultants.”

Both DOT and DPW promised to train their inspectors so they could better identify underground subsidence and washouts in and along aging infrastructure “to mitigate future challenges.”

Here is the full report released this afternoon: 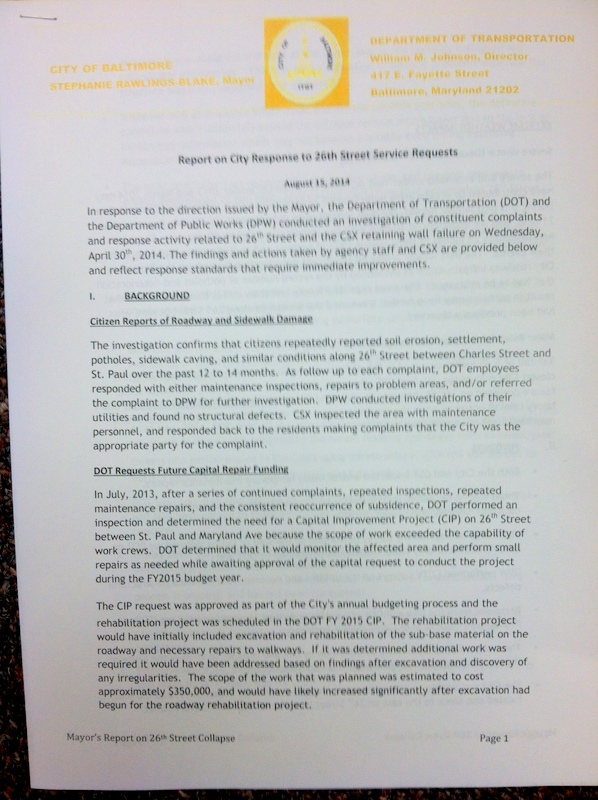 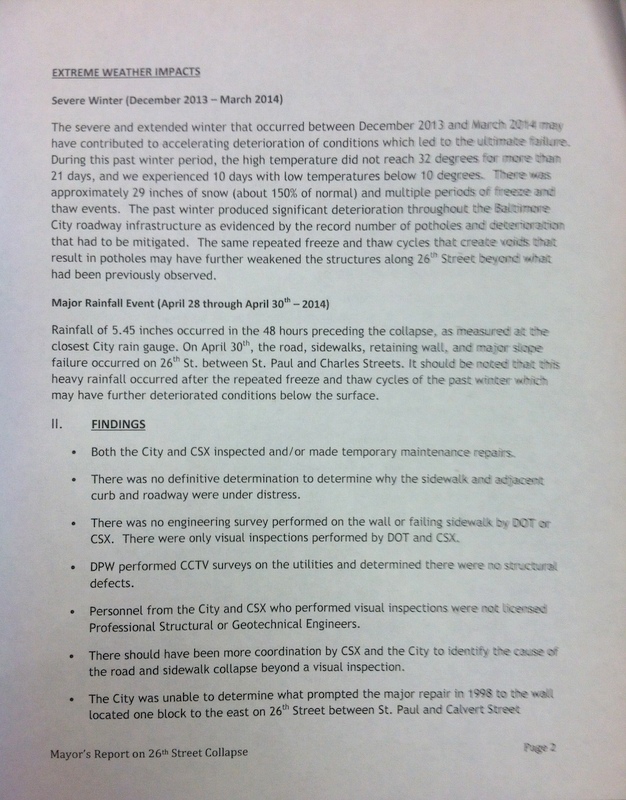 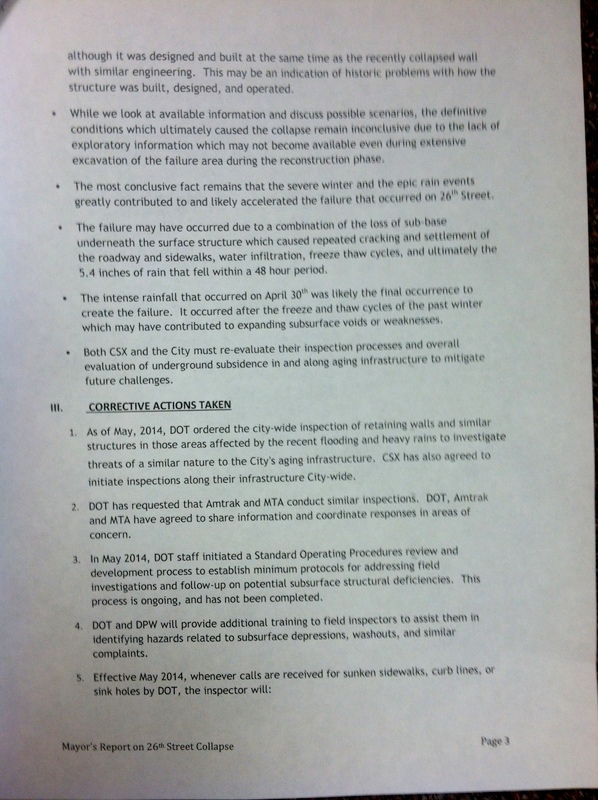 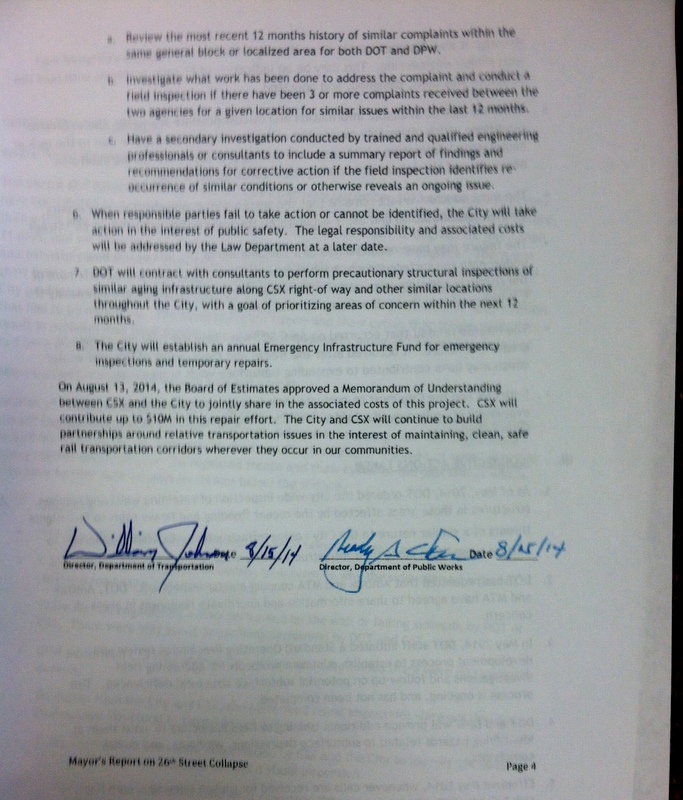