Last week, Mayor Stephanie Rawlings-Blake said the city had explored “all options” to pay for relocating a steam line at Horseshoe Casino before settling on the use of $3 million in impact funds earmarked for South Baltimore neighborhoods.

Apparently never on the table was the most obvious option – to bill Caesars Entertainment, the casino operator that requested the steam line change in the first place.

During a press conference, the mayor described the steam line as “city-owned public infrastructure,” hence the city’s responsibility. But she failed to mention that the street under which the line runs is owned by Caesars Entertainment.

In a Land Disposition Agreement dated October 31, 2012, the Board of Estimates sold land to Caesars to build a parking garage. As part of the deal, the city threw in several public streets to be closed to accommodate Caesars’ plans, including Warner Street. The specific language (page 5 of the agreement) states that the sale is “deemed to include payment for the Closed Street Areas.” An accompanying map shows Warner as a closed street.

Seven months later, on May 16, 2013, the mayor signed Ordinance 12-0158 that officially closed Warner Street between Worcester and Bayard streets.

Section 3 of the ordinance stipulated that “all subsurface structures and appurtenances now owned by the Mayor and City Council” on Warner Street will remain city property.

But the ordinance went on to say: “If any person wants to remove, alter, or interfere with them [the subsurface structures], that person. . . must agree to pay all costs and expenses, of every kind, arising out of the removal, alteration, or interference.” 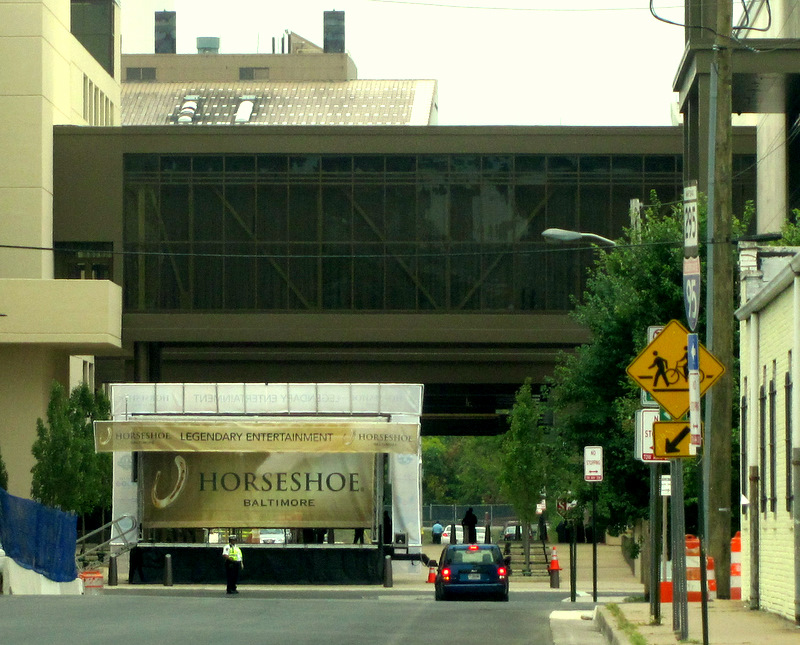 A view looking south from Worcester Street shows the physical alterations that Caesars has made to Warner Street to accommodate casino visitors and valet parking. (Photo by Mark Reutter)

Caesars had made extensive changes to Warner Street in order to turn it into a pedestrian mall with valet parking. Planters, brick walkways, advertising signs and a kiosk have been installed for arriving guests.

Last week, the mayor and Board of Estimates (except Comptroller Joan Pratt) voted to amend the Land Disposition Agreement to reimburse Caesars for building the steam line with its own contractor.

There was no discussion by the board before the 4-1 vote, with City Council President Bernard C. “Jack” Young, City Solicitor George Nilson and Public Works Director Rudy Chow voting with the mayor.

No Response from City or Casino

Efforts on Friday and today to get comment by Horseshoe’s general manager, Chad Barnhill, assistant manager Alex Dixon, and city officials were unsuccessful.

There has not been a response yet from any of the officials.

Ordinance 12-0158 closing Warner Street for the Horseshoe Casino calls on “persons” who want to relocate the city’s property under the street to pay for it. Section 4 adds other conditions.

At present, a surface steam pipe starts at Warner and Haines streets and runs north around the casino garage.

As of last Thursday, the old steam line was still in use. It is maintained by Veolia Energy, which supplies heat to downtown businesses and institutions under a long-term lease with the city.

When a reporter visited the casino last Thursday, steam vapor was venting from a Veolia-maintained stack at Bayard and Warner streets.

Casino employees, city police, pedestrians and drivers paid the trailing white plume no mind as they went about their business.

Nearby, the pipe for the temporary line could be seen along the ground. A workman appeared to be sound asleep in the cab of an excavating machine. Otherwise, there was no human activity around the pipeline.

Safety and Revenues Cited by Mayor

Last week, Rawlings-Blake argued that keeping the old underground line posed a safety hazard to casino visitors – and could cause revenue loss to the city.

“Potentially 10,000 visitors per day would be exposed to hot manhole covers as well as steam exiting those manholes,” she told reporters.

She added that the city could potentially lose “$90,000 per day [in casino revenues] every time the street was closed” for repairs on the old line. 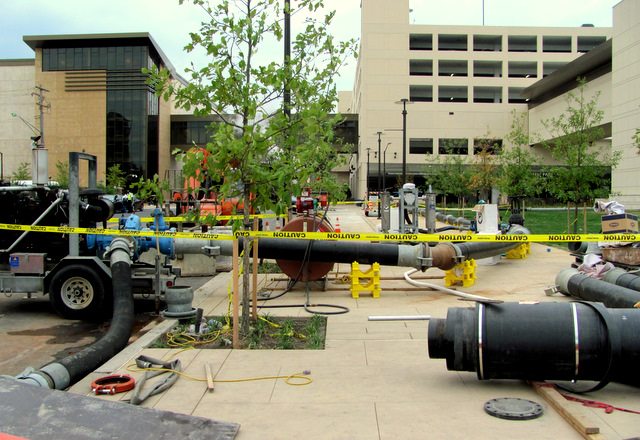 The temporary steam line goes around the casino’s concrete garage on the right. (Photo by Mark Reutter)

An inspection by The Brew suggested that the possibility that repairs could shut down the casino, to be open 24/7, was remote.

By the city’s own reckoning, there are only three manholes along the closed section of Warner Street. There appears to be plenty of space around the manholes for Veolia to service them without closing the pedestrian mall.

What’s more, even if the whole street were closed, visitors could still access the casino from overhead enclosed walkways from the parking garage.

The mayor was asked last week why the city decided to upgrade this particular section of the 14-mile steam pipeline that routinely emits vapors and acrid smells on the streets of South Baltimore and downtown. 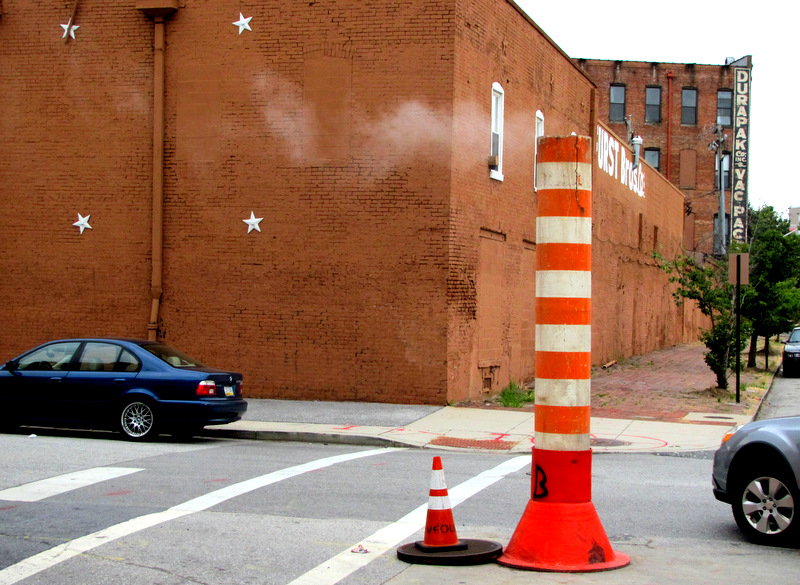 Hot steam is a way of life in South Baltimore. A few blocks from the casino, a car goes around an open vent stack on Leadenhall Street. (Photo by Mark Reutter)

“I think you would be hard pressed to find another place where that many people would be walking over the steam line on a daily basis,” she said, referring to the expected 10,000 visitors using Warner Street to enter the casino.

She added that “but for the casino, we wouldn’t move the steam line,” which she said made it logical to use community impact funds coming from future casino revenues to build the new line. She never mentioned billing the work to Caesars or Veolia.