Even after excluding the $3 million that the city has set aside to pay Caesars Entertainment for a relocated steam pipeline, the vast majority of first-year casino impact funds earmarked for 19 South Baltimore neighborhoods won’t be going to those communities.

A Brew analysis of the $10 million expected to be raised this year in impact funds from the Horseshoe Casino – which officially opened last night – shows that $3.85 million will be allocated for city services (police, sanitation, security cameras, traffic control, medics) directly supporting the casino.

Another $2 million will go for a transportation study, upgrades to nearby industrial buildings, staff support for a proposed Community Benefits District – and payments to a slew of consultants.

Another chunk of impact money ($2 million) is headed back to Caesars Entertainment as reimbursement for upgrading and repaving the four streets around the casino.

This fund is in addition to the $3 million pledged last week to Caesars to  relocate a steam-heat pipeline on Warner Street, which will be allocated from 2016 and 2017 impact funds, according to the mayor’s office. (MORE)

After deducting for all of these expenses, the 19 neighborhoods identified as qualifying for impact revenues will receive $700,000 worth of adult employment and training benefits, two new sanitation crews if “funding becomes available,” $255,000 for a youth jobs program, $110,000 for a neighborhood food advocate, and $500,000 reserved but not to be spent for a community grants program.

Impact funds were set up by the Maryland General Assembly to improve the quality of life of communities impacted by a casino.

The law states that impact grants “shall be used for improvements primarily in the communities in immediate proximity to video lottery facilities and may be used for the following purposes: infrastructure improvements, facilities, public safety, sanitation, economic and community development, including housing, and other public services and improvements.”

No funds were allocated for such amenities as new play fields, youth recreation programs or parks, which are noticeably lacking in the district. (From a separate educational fund, however, casino revenues will be used for a citywide school rebuilding program.)

In terms of tangible physical improvements, the most likely evidence of the impact funds next year will be a couple hundred new trees expected to be planted along neighborhood streets.

The city’s funding priorities have led James Alston, the Westport representative on the casino’s Local Development Council (LDC), to question if communities  will ever receive more than nominal impact funds from the casino.

“What’s going to be left for us?” he asked in an interview with The Brew. “They are using impact money for things that it was never intended for.”

State Sen. William C. “Bill” Ferguson, who chairs the LDC, vigorously defends the spending as appropriate for a first-year start-up of community programs that will take time to develop and will need professional staff to be successful. 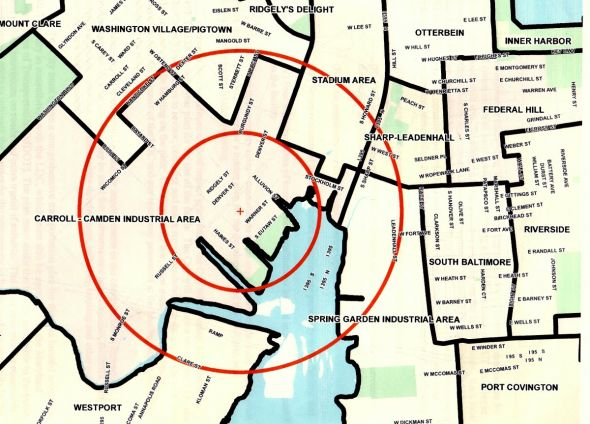 Ferguson noted that the expenditures were based on priorities formulated by the LDC, which includes seven residents, four business representatives, one casino representative and three state elected officials.

A list of priorities was voted on last year by the LDC and forwarded to city agencies, who developed the first-year spending plan that was then modified and approved by Mayor Stephanie Rawlings-Blake.

Here are the descriptions of the key items earmarked for casino impact funds between now and June 30, 2015:

Baltimore Police plan to deploy three sergeants and 10 officers in a “mini-district” around the casino. The idea is to assess the level of crime “caused by persons leaving the casino (robberies), vagrants around the casino, possible prostitution, traffic issues/accidents, etc.,” according to a fact sheet compiled the LDC.

The fact sheet provides these details about possible crime and how BPD plans to react to it:

“One of the police’s primary concerns is that the 24-hour [casino] liquor license will draw some of the unfavorable gang-affiliated crowds after the clubs/bars close at 2:00 a.m. These individuals will be driving in vehicles and have been known to be armed. BPD needs to increase enforcement in the area surrounding the casino in order to ensure safety within the actual property of the casino.

“BPD is uncertain as to how it’s calls for service will be impacted. However, based on lessons learned elsewhere, BPD is certain that call volume will increase in the radius surrounding the casino. Although the casino will be hiring officers on the inside of the establishment, the officers in the mini-district will need to be capable of providing a rapid response in order to assist those officers during a large-scale issue or incident of violence.”

CitiWatch cameras will be placed around the perimeter of the casino, linked by above-ground fiber optic cables. Eventually the cables will be buried and the fiber optic network expanded outside the casino district to connect to anchor institutions, elementary schools, business parks and other areas of planned development.

The Mayor’s Office of Information Technology (MOIT) will work with the police  to develop the fiber optic/security camera program and will hire a consultant to “survey the interest and needs of residents and businesses for increased broadband service.”

(Earlier this year, the Board of Estimates allocated $754,000 in general funds to install fiber optic cables on Warner and Stockholm streets for the police.)

These funds will supplement the money DOT has already allocated for a complete streets study for the whole South Baltimore area. The plan “will engage each neighborhood and larger community in defining all aspects of street design within the right of way and beyond the pavement to include buildings and open space features, storm water management, transit, walking, bicycling, alleys, main streets, neighborhood streets, boulevards, parking, temporary street closures, intersection improvement, public plazas and other street elements as identified through the complete streets engagement process,” says the agency.

The impact funds will pay for two full-time transportation planners, an interim testing project – and $500,000 for a consultant hired by DOT.

“If funding becomes available,” Tier-Two payments will be used for two additional crews “dedicated to addressing the sanitary concerns within the 19 impacted neighborhoods and assisting the crew in the immediate casino area.” A second load packer ($110,000) will also be purchased with these funds.

The city expects to assign an Emergency Medical Services (EMS) unit to the casino during peak hours of activity. The LDC document notes that, currently, the city does not meet the demand for medical services in the neighborhoods surrounding the casino.

The city will use impact funds to assign special enforcement officers to the casino area, especially during Baltimore Ravens home games.

This allocation will help develop and staff a CBD, akin to the benefits districts in Charles Village, Mt. Vernon and downtown. Better sanitation services and workforce development were identified as the top priorities for the South Baltimore CBD.

A community fund will receive $500,000 in impact revenues but will not disburse any of the funds. After three years of accumulating impact money, the fund will utilize one-half of the earned interest to make small grants for neighborhood projects.

The goal of the center is to improve residents’ computer skills, explore career possibilities, prepare for interviews and connect to employers. The Mayor’s Office of Employment Development (MOED) would run the center. The impact funds will go mostly for staffing.

This allocation will pay for enrolling about 30 “low-skill, unemployed and under-employed” residents in a 15-week training program run by MOED.

MOED will develop a program for young people living in the impact areas, hiring a director to oversee the program and reimbursing YouthWorks and other training programs for their services.

“The Consultant will research and present relevant best planning practices, review and evaluate initial data assessments and current City initiatives compiled by City agencies, review recommendations from existing master plans, comment on the preliminary visioning exercise, develop recommendations in specific topic areas, and integrate all of the above into a meaningful master plan document” for the 19 impacted neighborhoods, according to the LDC.

To provide ongoing management and coordination among the various
stakeholders – LDC, city, community organizations and non-profit partners – the city will hire a full-time project coordinator.

The Baltimore Development Corporation (BDC) will hire a consultant team to develop plans for a “vibrant entertainment district” along Warner Street between the casino and M&T Bank Stadium.

• Facade Improvements to Commercial and Industrial Buildings near the Casino  – $175,000

BDC will offer matching grants to private businesses improve the looks of their properties along the “gateway” Russell Street corridor to the casino. “Funds would be targeted to improvements made to areas visible from the public right-of-way,” the allocation notes.

The target is to plant about 340 trees ($450 per tree) in casino-impacted neighborhoods. The LDC called for $450,000 in tree planting, but the funds were drastically reduced by the mayor’s office.

The Neighborhood Food Advocate proposal received the most support of any health initiative considered by the LDC. Council members initially wanted to provide financial assistance to food stores wanting to locate in local “food deserts” with impact funds, but the funds next year won’t be enough.

Instead, the Year 1 plan is to fund “a full-time person to educate residents about healthy foods” and to provide “technical assistance” to corner store owners about how to order and stock healthy foods.