By a 3-2 vote, the Board of Estimates yesterday awarded $1.1 million to an Arizona-based company to supply Baltimore Police with about 750 Tasers, supplementing the 1,165 Tasers ordered last December as part of the department’s objective to arm each officer with an electroshock weapon.

“We currently have 1,165 of Model X26p and 250 of Model X26, which are being phased out,” said Sarah Connolly, a spokeswoman for the Baltimore Police Department. “Officers assigned to patrol are being issued the Tasers first.”

Adding in the cartridges (at $27.24 each) and deducting for a volume discount, each Taser costs taxpayers about $1,260.

Yesterday’s contract was passed without discussion by the board, in a voice vote with other spending items.

Asked today why Young voted against the expenditure, his spokesman, Lester Davis, said he believed the police department has not sufficiently trained officers in the use of the weapon. 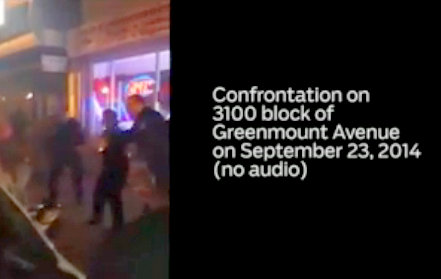 From a video in which police used at least two Tasers (see the flash of yellow at center of picture) to subdue a suspect outside a Greenmount Avenue nightclub.

“He would like to make sure that proper training is in place prior to providing officers with additional equipment that could be used to apply lethal force,” Davis said.

In an interview today with The Brew, Pratt said the funds should go toward training officers about other ways to settle confrontations “given the  recent tensions between residents and a few police officers not representative of the department.”

Pratt also cited the safety issue, saying, “They are Tasering citizens who have health issues and can be permanently injured.”

Tasers can be lethal if used repeatedly in prolonged (beyond five second) discharges. The weapon has been linked to four deaths and an unknown number of injuries since 2004, according to David Rocah, attorney for the American Civil Liberties Union of Maryland. Rocah said that city police department’s use of Tasers doubled from 123 in 2009 to 257 in 2012.

Last May, George V. King was reportedly Tasered five times by an officer called to Good Samaritan Hospital after the patient became disruptive. The unarmed teenager went into a coma and died a week later. Connolly said the matter is still under investigation.

Last month, the spending board paid $63,000 to a woman Tasered by police after she reported a home burglary.

While condemning excessive force by officers in the wake of several videos showing police punching and kicking citizens, Police Commissioner Anthony W. Batts said he intends to issue a Taser to every member of his department.

In the wake of the King incident, the ACLU, a civil rights group and the King family’s attorney called for a moratorium on Taser use by police and a review of the policy.

Asked how the BPD responded to those demands, Connolly said, “The policy is currently under review.”