More than 30 Lake Clifton High School alumni came to the Baltimore School Board meeting last night to express their unhappiness that their alma mater’s long-awaited replacement could be deferred because it costs too much to build.

The Lake Clifton building was on track for replacement in year one of the 21st Century School Buildings plan, but might be postponed because City Schools underestimated the project’s costs.

Richard McCoy, a Lake Clifton alumnus, told the board, “Deferral could lead to closure. We are being proactive.”

According to the school system’s own reports, the building on St. Lo Drive in Clifton Park faces significant structural problems – some associated with its siting in a lake bed – that has led to sinking in places over the years.

“That’s what made it a year one school,” said Mark Washington, executive director of Coldstream-Homestead-Montebello Community Development Inc. and another Lake Clifton alumus.

The Lake Clifton building, which once housed Lake Clifton-Eastern High School, will cost an estimated $101.2 million to rebuild, according to a report presented to the Maryland legislature earlier this month.

It currently houses two smaller schools, REACH! Partnership and Heritage High School, and, if rebuilt, could house a third.

Costs Up, Renovations Down

When the school system and the Maryland Stadium Authority adopted the plan to update the city’s aging school buildings in January 2013, they hoped to rebuild or restore 30 to 35 of them.

But at last month’s meeting, the school system announced that it had substantially underestimated the work’s costs and would be able to construct or renovate only 19-22. 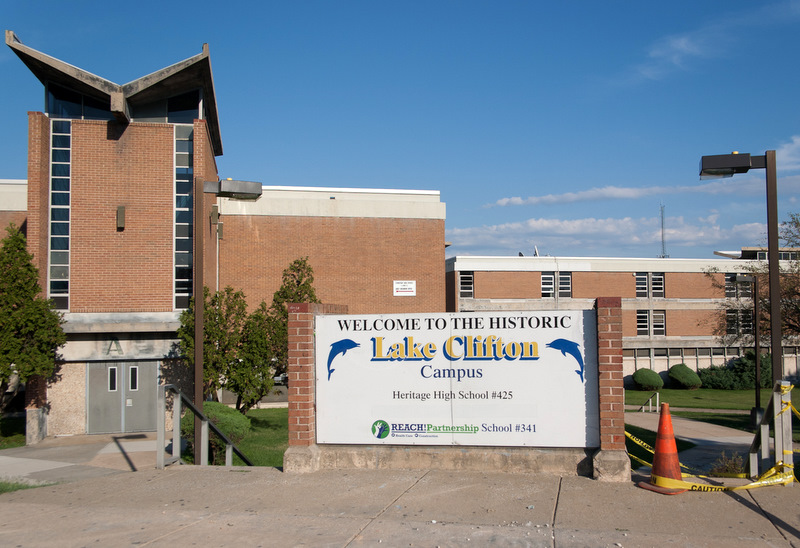 The Lake Clifton campus houses two small schools. Built on a lake bed which is now sinking, reconstruction of the complex is now estimated at over $100 million. (wn.com)

The stadium authority, school system and City Schools Partners worked together to develop possible cost-savings measures to maximize the number of schools that could be part of the first phase of renovation/replacement.

The Vivien T.Thomas Medical Arts Academy, located on North Calhoun Street, will cost an estimated $73,821,000 to renovate or replace, and is slated for year two of the multi-year schools renovation/replacement plan.

Their deferrals will support the renovation/replacement of less costly elementary and middle schools.

A coalition of neighborhood associations and Lake Clifton alumni see Clifton’s possible deferral as a challenge to the Northeast community on multiple levels.

Clifton Park is already dealing with empty school buildings. The former Laurence G. Paquin School building is one of them, according to McCoy.

Washington said he fears a long-term deferral – the school system has not indicated when the Lake Clifton building would be renovated – and the building’s structural instability will eventually lead to it being surplussed as well.

“You want to see what happens when surplussed school buildings sit?” Washington asked. “Go look at the Samuel Gompers building on North Avenue and Broadway. It’s got trees growing out of it. That’s what happens.” 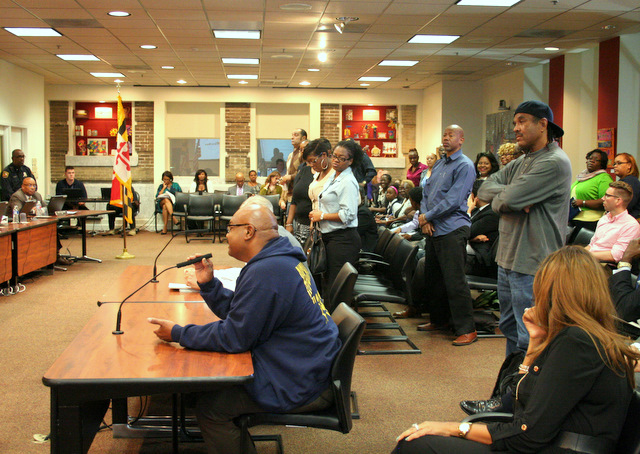 Richard McCoy, a Lake Clifton alumnus, told the school board that the decision to consider deferring the rebuilding of Lake Clifton has been too hasty. (Photo by Danielle Sweeney)

The coalition also fears that the two high schools inside the Clifton building will be permanently relocated, and students in Northeast Baltimore will have even fewer high school options.

“That will just make it harder for some kids to get to school,” Washington said. “They already have transportation challenges.”

The decision to defer the replacement building came suddenly, both McCoy and Washington said.

Nikki Gilliam, who sits on the Coldstream-Homestead-Montebello (CHUM) board, told the school board last night that the process lacked transparency.

“Our kids deserve better than that,” she said.

A school board vote is required for the deferrals to be approved. According to the annual report, that vote will take place at the board’s December meeting.

McCoy, Washington and the other Lake Clifton alumni say they’ll be there.