Can we have a classic leafy-green college campus right here in downtown Baltimore?

The University of Maryland almost has it, but in their zeal to create an “innovation landscape,” they’ve missed the ivy right under their feet.

The University’s and the West Side’s most vexing physical problem is how to bridge Martin Luther King Jr. Boulevard. The solution is to pare down its oversized right-of-way and take advantage of its lush green periphery to create a new campus and neighborhood focal point.

Remarkably, this can be done without cutting into the busy roadway and disrupting the current flow of traffic. Under the plan detailed below, all six of the existing through traffic lanes will be retained.

Reworking perimeter barriers like MLK Boulevard into a series of active linear parks has the power to bring West Baltimore into the city’s growing network of desirable downtown neighborhoods.

Held Back by Highways

Until around 1980, West Baltimore held its own. East Baltimore was still under the cloud of a looming expressway, and the Hollins Market area was vying with Fells Point to be the center of Baltimore’s hipster bohemian culture.

As for gentrification, it was no contest – the West Side’s Union Square was the clear winner over southeast neighborhoods like Butchers Hill or Canton.

Then the southeast was liberated from the expressway threat while Poppleton, Harlem Park and Greater Rosemont were upended by the “Highway to Nowhere,” an isolated segment of I-70 rammed between Franklin and Mulberry streets.

The decline of the west began in earnest.

The construction of MLK, a leftover of the Franklin-Mulberry boondoggle, created a series of fragmented properties that have been turned into small isolated parks and redevelopments of varying relevance. While most of the open spaces are really quite lush and beautiful, none have created sufficient energy to significantly improve the community as a whole.

The original plan to build a full-scale expressway in the MLK corridor left excess land along the western periphery of the roadway. Turning this into an active park would reduce the barrier effect of the street. (Google Earth)

The Downtown Partnership has recognized this problem and recently suggested that the various MLK parks would be more useful if upgraded and linked.

That is exactly the solution. But it will only work if it is done in a very strong and forceful way. The tectonic force of downtown’s eastward drift is far too strong for weak half-hearted measures.

Integrating MLK’s open space network to the University of Maryland would ensure that it is integrated with the west side as a whole.

Some of the keys to adopting this approach include:

• Making the development density along MLK Boulevard as intense and active as possible to counteract the divisive impact of the highway and convey that this corridor relates intimately to downtown. The University of Maryland and the Biopark should direct as much of their future large-scale growth to the MLK corridor to the greatest degree possible, while focusing on small-scale uses along Baltimore Street and its vicinity.

• Making the park system as linear as possible, which translates into making it as active and extroverted as possible, notably for biking, jogging and simply creating the maximum overall reach. Some of the existing park spaces are quite inwardly focused, and while this is OK, it does not contribute much to the overall desired effect. The north end of this park system could be anchored by the beautiful iconic gazebo park at Heritage Crossing.

• Further activating MLK Boulevard by reviving the plan to put the light-rail Red Line there, as it was throughout the Draft Environmental Impact Statement process and in the resultant “Locally Preferred Alternative.” The Red Line was moved to Fremont because of engineering problems with a tunnel alignment originating from MLK. However, costs have since exploded and the Fremont homeowners have sued the MTA for changing the plan in violation of the community process.

Cutting out the Flab

Downsizing MLK Boulevard can be done with no appreciable impact on traffic flow, and at a cost that is commensurate with the value of the land created. 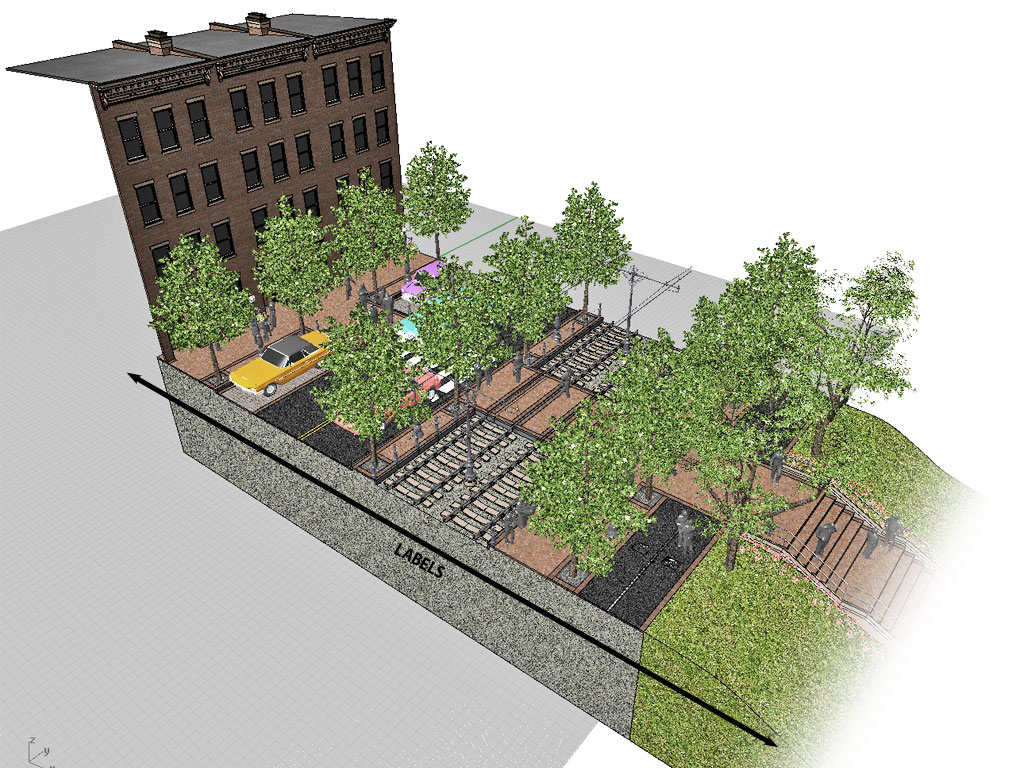 The existing east (downtown) edge of the highway could be kept as is, since there is very little wasted land on that side anyway.

All six of the existing through traffic lanes and all the left turn lanes should be retained.

The narrowing can be accomplished by greatly reducing the width of the median strip and eliminating most of the pavement devoted to right turn lanes, all of which are grossly underutilized. The width of the remaining lanes could also be reduced for more narrowing.

The current median width is typically about 36 feet. It can be reduced to 16 feet while still accommodating all the left turn lanes and leaving a sufficient six-foot pedestrian refuge. Wider pedestrian refuges just make it harder to cross the street.

So anywhere from about 20 to 50 feet of new land can be created along the west side of MLK Boulevard for a far bigger, better and more continuous linear park.