The Ritz Cabaret “gentleman’s club” in Fells Point had a big trust problem going into yesterday’s Liquor Board hearing.

Community leaders have been skeptical for months about the owners’ stated plan to build a high-end steak house – totally separate from the stripper bar – on a vacant lot adjacent to the 504 South Broadway establishment.

Yesterday the club owners were asking the three-member board to grant them an unprecedented expanded BD-7 tavern license to allow them to move ahead with their plan and, to show that they had community support, brought a petition signed by 270 people.

But when opponents of the Ritz, reviewing the petitions during a recess, saw what was written on one page, they gasped, then guffawed.

“Every attendee to the hearing will receive $50 Ritz bar tab,” someone had written on the bottom next to an asterisk.

The $50-dollar inducement was just one of the factors that Chairman Thomas Ward and his fellow commissioners cited as they voted unanimously to deny the request. The licensees “were not really exercising much intelligence,” Ward said, noting that in addition to the $50 offer, many of their petition’s signatures appeared to be written by the same person.

“You could put a door anywhere in that wall,” said Commissioner Harvey E. Jones, meaning the wall between the adult entertainment and the planned beef-themed haute cuisine.

One draw may have been the appearance of former Liquor Board Chairman Stephan W. Fogleman in the novel role of attorney for a community group, in this case the Fells Point Community Organization (FPCO). Another attraction may have been the possibility of fireworks between Ward and Melvin J. Kodenski, attorney for the licensees. 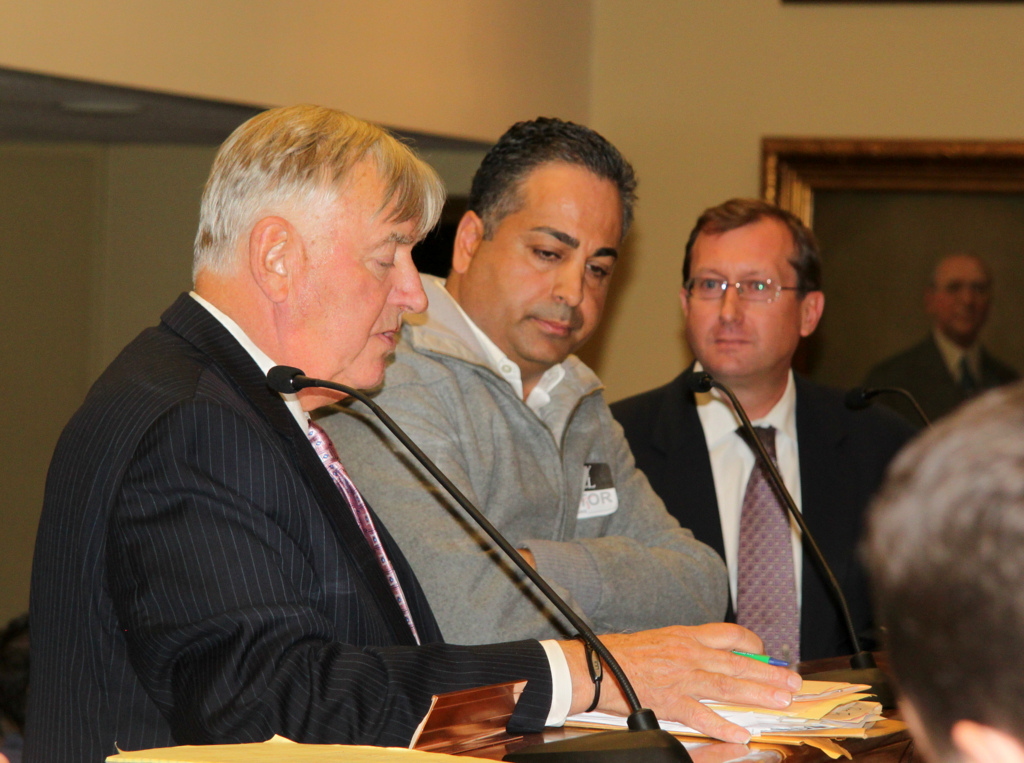 Melvin Kodenski, Omid Ilkhan and Stephan Fogleman before the Liquor Board in the matter of 500-504 S. Broadway, the Ritz strip club. (Photo by Fern Shen)

In comments to The Brew earlier this week, Ward blasted Kodenski for apparently persuading Liquor Board executive secretary Michelle Bailey-Hedgepeth to send subpoenas to 16 community members requiring them under penalty of the law to appear at the hearing.

Ward, whose electronic signature was on the subpoenas, rescinded them. Yesterday there was no public mention of the incident.

The underlying issue of mega-bars in Baltimore, however, was the main source of drama in the battle over the Ritz, with community associations facing off against a business group that has talked for years about expanding into this prime corner of Broadway and Eastern Avenue.

The owners sought to expand their tavern license, which does not require food sales, into the lot at 500 South Broadway, where a building collapsed in 2010.

Saying they fear the steakhouse concept would fail and the adjacent establishments would become one large rowdy bar, FPCO and other Fells Point and neighboring community groups have opposed the expansion.

Laying out the community’s case, Fogleman asked Hitchiner if combining the 250 seats at the current Ritz with an additional 158 proposed for the steakhouse wouldn’t create, essentially, the biggest mega-bar in Fells Point?

The licensees testified that they would keep the steakhouse separate and that there would be no passageway from one establishment to the other.

But property owner Omid “Anthony” Ilkhan, who testified that he was the financial backer of the steakhouse, acknowledged a conceptual connection between the restaurant and the strip bar.

He said a neighboring steak and strip bar set-up is used at the Penthouse Club in New York “and New Orleans, of course.”

This didn’t set will with Commissioner Moore.

Seeing discrimination in the arrangement, she said, “It’s all gentlemen who are going into the steakhouse! It’s all for the men!”

Licensee Hitchiner assured her that both women and men patronize the Ritz and would be welcome at the steakhouse. 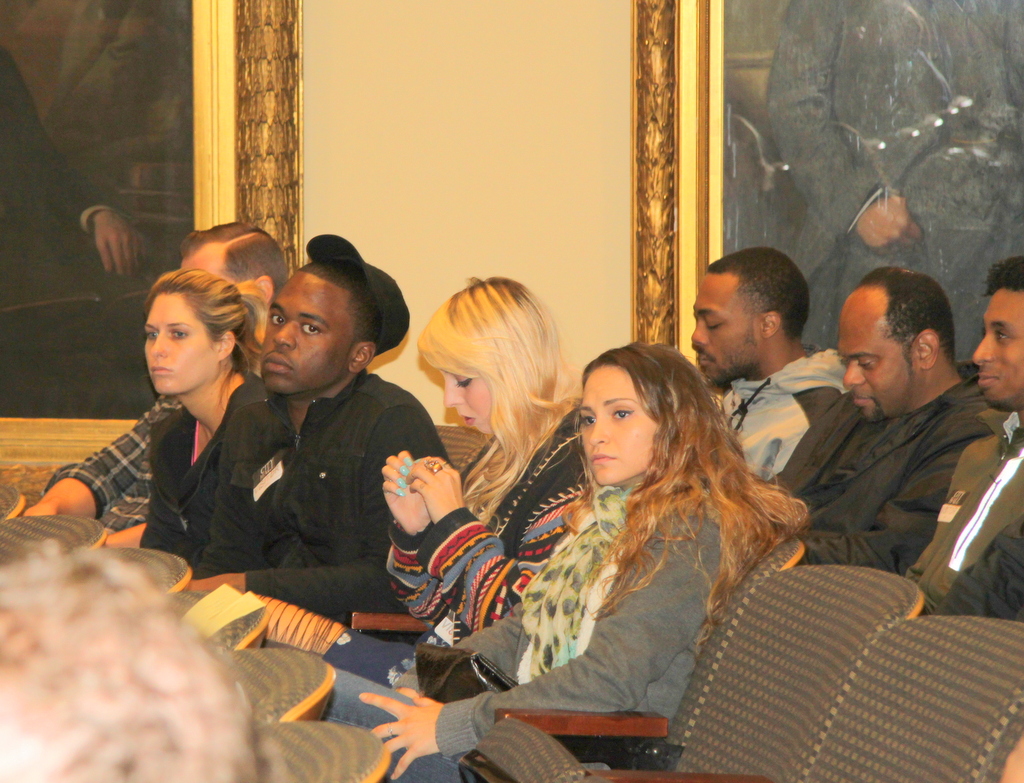 Community leaders, who believe a “B” restaurant liquor license would give the community more control in order to keep the business from devolving into just a bar, have asked Ilkahn why he didn’t want to go that route if he truly wanted a restaurant.

One community group did sign off on an MOU with the Ritz group – the Fells Point Residents Association, whose president David Martz testified that 24 members voted in favor of doing so. The MOU, which provided for 50.1% of steakhouse sales coming from food, would be difficult to enforce, opponents testified.

Ward, who at times seemed irritated by Fogleman’s allusions to his previous chairmanship, did allow one of them. “In seven years on the Liquor Board I never saw something that said $50 bar tab to anyone who signs the petition,” Fogleman said, objecting to the signatures.

The former chairman made withering observations about the misspellings in the “slapped-together” proposed menu the licensees had submitted, and the fact that they had at one point written that the food offered would be “snacks.”

He asked the 19 people who had come in support of the club to stand. Asked which ones were employees of the Ritz, more than a dozen raised their hands.

Fogleman called the group’s proposal “a backdoor way around the law.” Kodenski said the licensees should be allowed to go forward with a plan “where the city needs something done with this property.”

Ward, seemingly addressing Kodenski as a generational peer, interrupted him to say “a lot of people are fed up – the neighborhood is changing.” 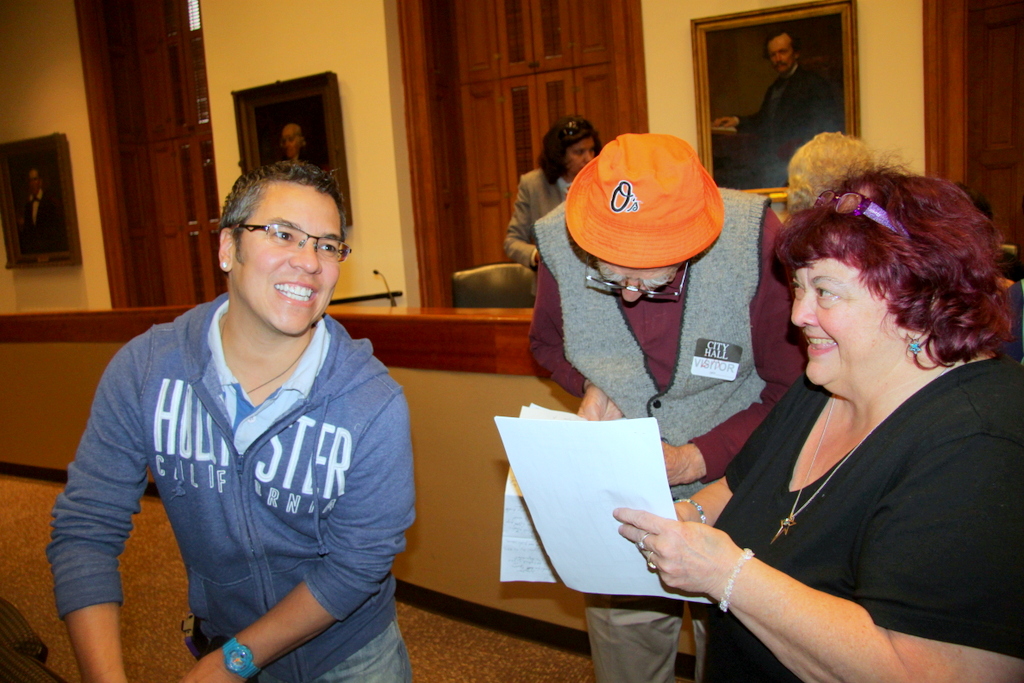 Victor Cobin and Joanne Masopust react to their victory in their battle against the Ritz expansion. (Photo by Fern Shen)

“There are too many bars. They’re opposed to what’s happening in their life. The young people have swarmed into their life,” he said. “These two [kinds of] people are clashing.”

Ward said he appreciated that Ilkhan was offering to make a major investment in a business at that spot, but feared that he would do “whatever it takes” to make his investment back, including changing the business’ concept.

In the end, for him it seemed, it all came down to trust.