The mayor and Board of Estimates are set today to approve a $262,000 Professional Services Agreement with a Washington, D.C. firm “to assist the city in enhancing its position on a broad range of matters before the federal government.”

As described in the short item tucked deep inside the BOE agenda, the work of Van Scoyoc Associates sounds almost heroic – a group of professionals helping Baltimore on big, complicated issues “including but not limited to” educational reform, urban affairs, municipal finance, infrastructure, transportation, housing, public health and public safety.

Given a Good Housekeeping seal of  approval by the law department, the contract seems as freshly scrubbed as the front entrance to City Hall.

Except that nothing in Baltimore politics is ever as clear-cut as it might seem. 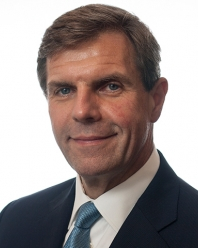 Van Scoyoc is actually one of the priciest lobby shops in Washington, and the man who handles the Baltimore account is about as well-wired to the local political establishment as you can get.

Kelly became Van Scoyoc’s lobbyist for Baltimore in February 2000, shortly after Martin O’Malley became mayor, and he has remained so ever since.

During that period, his firm has billed the city $1,060,000 in fees, according to an on-line database maintained as part of the U.S. Lobbying Disclosure Act. (NOTE: the Baltimore City School Board has its own paid lobbyists in Washington. Since 2007, they’ve been the Russ Reid Company.)

At today’s Estimates meeting, Van Scoyoc is up for a two-year extension of what it’s been doing for the last 14 years. Because the board is renewing a Professional Services Agreement, Van Scoyoc is not subject to competitive bidding rules or even an RFP (Request for Proposals) from other lobby firms.

Quite simply, Kelly and his colleagues are getting a sweetheart deal from the Mayor’s Office of Government Relations that was pre-vetted by the mayor, then presented to a board where she controls three of the five votes.

“Why do cities even need lobbyists,” asks Jennifer Bevan-Dangel, executive director of Common Cause Maryland. “Isn’t this what the congressional delegation is supposed to do?”

The only legitimate reason for private lobbyists, Bevan-Dangel says, is if a congressional delegation is so divided by party lines that it can’t deliver federal dollars to a jurisdiction.

(We emailed questions yesterday to Kelly about his lobbying for the city and his political contributions, but haven’t yet gotten a response.)

Kelly, his law firm and his partner “Stu” Scoyoc have contributed $5,000 to Mayor Rawlings-Blake, $5,250 to Mikulski, and $2,000 to former Mayor Sheila Dixon (when her star was still bright in 2008), according to state and federal election records.

The Rawlings-Blake money came in two chunks. There was $1,000 from Kelly personally in January 2011 and $4,000 from his law firm, Van Scoyoc, Kelly & Roberts, a month before the Democratic mayoral primary in September 2011.

That’s just the start of their generosity. The two lobbyists, their law firm and Scoyoc’s wife, Patricia, have given $5,000 to the Democratic State Central Committee of Maryland, $13,000 to O’Malley over several election cycles, and a whopping $28,000 to Lt. Gov. Anthony W. Brown (that includes $4,000 to his 2014 gubernatorial running mate, Ken Ulman). 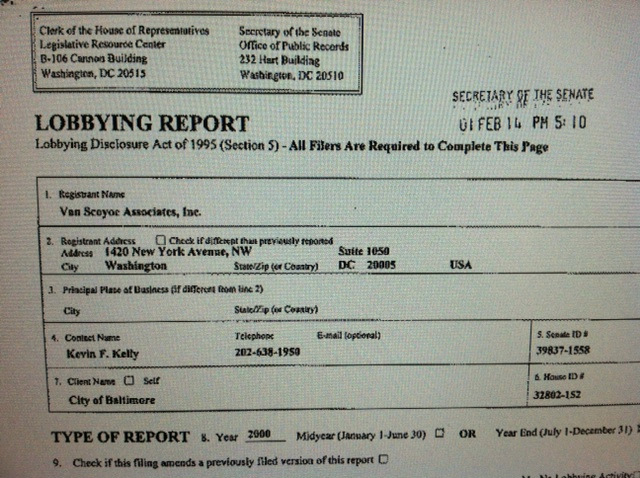 Kelly’s closeness with Martin O’Malley has continued over the years. He was picked by Gov. O’Malley in 2010 to chair the state’s Federal Facilities Advisory Board, a plum job for a lobbyist. The Facilities Board looked at the transportation and infrastructure needs of U.S. agencies in Maryland, giving Kelly the opportunity to mix with and make himself useful to government officials.

In terms of Baltimore, lobbying disclosure reports filled out by Van Scoyoc say that Kelly “monitors” funding coming to Baltimore from the Department of Justice, National Institutes of Health, FEMA, Homeland Security and other agencies.

He and several other associates also kept an eye out on the federal sequestration in 2013, the Water Resources Development Act of 2013 and the Federal Transit Administration’s “New Starts” program whose funds are being sought for the Red Line light-rail project.

Without more information, it’s difficult to assess the worth of Van Scoyoc’s lobbying efforts for Baltimore, says Bevan-Dangel.

“I do see the value of private lobbying of very specific issues before Congress,” she stated, “but with no deliverables and no competitive bidding, it’s hard to see exactly what the city’s getting back from this contract.”

Her take-away is that the use of the same lobbyist over so many years is emblematic of “the small world of the one-party city that is Baltimore.”