Score One for the neighborhood.

Thanks to quick-thinking citizens, the speed of Facebook and a phone call from 45th District Delegate Cory McCray – Code Enforcement was able to impound a truck used for illegal dumping in Herring Run Park and charge the driver and his dumping companions.

Patricia Dowd knew the blue pickup truck had no business driving in the park yesterday morning. But when she saw the toilet tank, ceiling tiles, television and an old door piled on top, she was certain the drivers were up to more than trespassing and called the police.

Dowd, a coordinator for Friends of Herring Run Park, took pictures of the dumpers – a fairly common occurrence along the picturesque stream, she says.

What set these dumpers apart, she says, was they were dumb enough to drive their truck down a flight of granite steps (near Tyndale Avenue) and got their truck stuck.

When confronted by Dowd and her husband, the dumpers claimed they thought the urban park was “the woods” and that dumping was, therefore, okay. 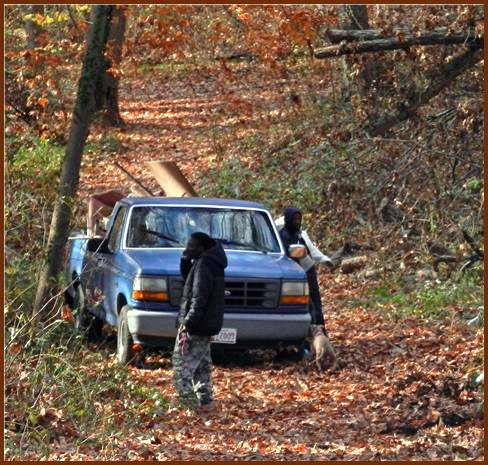 Several people milled around the loaded pickup truck that was found stuck in Herring Run Park. (Photo by Patty Dowd)

“The woman dumper said, ‘I told my husband this wasn’t a good idea. I’m a college student. I can’t get in trouble.’”

Dowd took pictures of the stuck truck and posted them to the park’s friends Facebook page, which attracted the attention of the park manager, neighborhood activists and McCray.

When the police arrived in the early afternoon, Dowd said, they took the dumpers’ information, but didn’t cite them or file a report. The officers told her they didn’t have jurisdiction in a city park. A park ranger was required.

Since no one was detaining them (and they couldn’t afford a tow truck), they eventually abandoned their truck.

In the meantime, McCray had called Code Enforcement’s investigative unit, which came out and extricated and impounded the truck. “Code Enforcement is actively pursuing the dumpers,” McCray said. “And they can also go after the owner of the truck, if it’s not theirs.”

McCray – who ran as delegate on a get-tough-on-dumpers platform – says illegal dumping is a problem all over the city, but is especially “ferocious” in Northeast Baltimore.

The Brew’s series, “Taking on Trash,” recently focused on citizen efforts to stop mattress and tire dumping in Coldstream Homestead Montebello, a neighborhood just a mile south of Herring Run.

McCray said yesterday’s nab was unique because the vehicle was caught and Code Enforcement has their tag number. He credited the city housing department, Dowd and her neighbors for their dedication. (It took about nine hours to get the truck out of the park.)

“Residents have to do the right thing for their neighborhood,” he said. “We get beaten down so much, it’s important to see when the system actually works.”