Now a new plan calls for a shorter tunnel which would cut a swath through the Midtown-Edmondson neighborhood.

The west portal under the new alternative tunnel would be located near the very typical West Baltimore intersection of Payson and Lanvale streets. Typical for West Baltimore means a plethora of abandoned houses.

The tracks would come out of the ground and cut a diagonal swath across four blocks of street grid packed with decaying rowhouses and unused industrial land on a bee-line to the West Baltimore MARC station at the end of the “Highway to Nowhere.”

In accordance with the “you break it, you buy it” principle, the proposed routing virtually assures that the city would have to come up with a new major repair plan for this bleak neighborhood.

Strategically, this plan also would require rebuilding the West Baltimore MARC station from the ground up. That creates an opportunity to solve the station’s many intrinsic faults which have been immune to band-aid solutions. 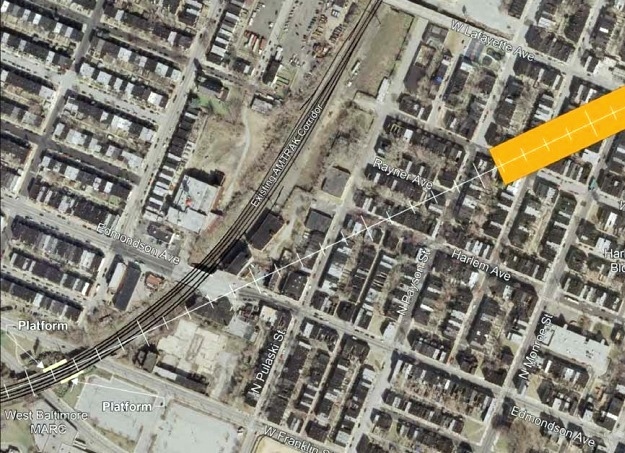 The new tunnel plan is contained in a “Preliminary Alternatives Screening Report” prepared by the Federal Railroad Administration in cooperation with the Maryland Department of Transportation, which is online in draft form (here) to be finalized next month.

The first study stage was a “fatal flaw analysis” which was used to give a final dismissal to three alternate corridors elsewhere in the city: “Route 40” under downtown, “Sports Complex” under the Inner Harbor, and “Locust Point” under the harbor just north of Fort McHenry. 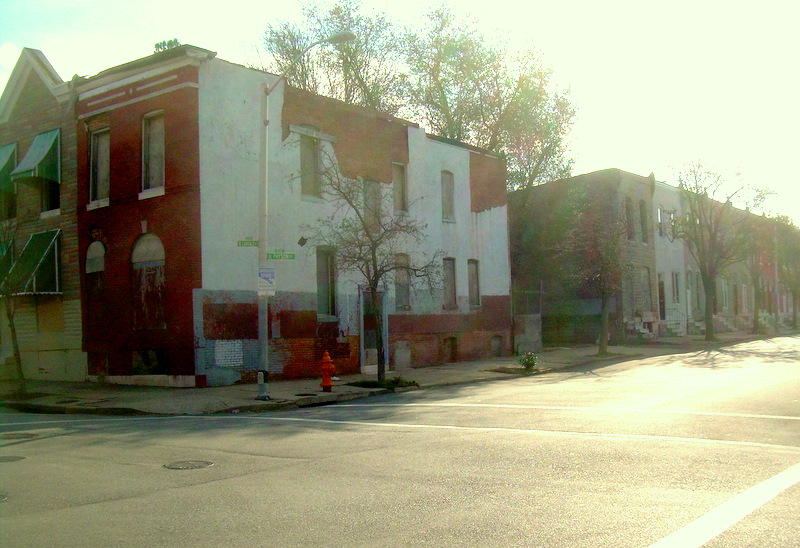 The proposed west portal of the new Amtrak tunnel is a mix of deteriorated and abandoned rowhouses. (Photo by Gerald Neily)

In each case, the fatal flaw was that it “does not use existing [rail] infrastructure.”

Other route variations within the current corridor were also ruled out for “infeasible geometry” (curves too sharp or grades too steep).

The second study stage looked at smaller variations within the same corridor and concluded that the previously drafted “Great Circle” and the new “great swath” justified further study.

Midtown-Edmondson and surrounding neighborhoods have been subject to grand redevelopment schemes since the 1960s when the first mass demolitions occurred for the swath between Franklin and Mulberry Streets that became the “Highway to Nowhere.” The most recent plan is the Red Line light rail project.

All have been accompanied by artists’ sketches of new housing and other development. None have happened.

The existing MARC station has numerous inherent problems, none of which have had a clear plan for solution. It is situated on a curve, so its grossly undersized platforms create gaps while boarding trains which are a constant hazard.

The most recent plan was to move the entire station southward to a straight section of track which would make the station more remote from the newly expanded parking, the proposed Red Line, the communities and the hyped-up development “anchor” – the historic but crumbling Ice House. 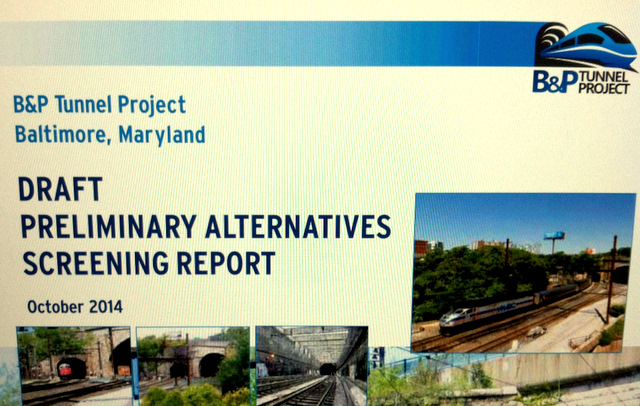 Cover of new report on alternatives for replacing the obsolete B&P Tunnel used by Amtrak and MARC.

But the biggest problem is the extremely tight and unattractive underpasses for Franklin and Mulberry streets, which must be shared by MARC patrons, a huge volume of speeding traffic and the proposed Red Line.

All of these problems could be solved with enough money, of course, but even the $3 billion Red Line has not proven to be big enough to allocate sufficient funds to avoid cheap band-aid solutions.

That’s where the new Amtrak plan comes in.

The alignment would virtually necessitate a whole new state-of-the-art station integrated with the Ice House and the communities, together with a replacement for the Franklin Street underpass with one spacious enough to accommodate traffic, both Red Line tracks and pedestrians.

The new report contains no cost estimates, but the best part is that Amtrak is funded nationally, not through MDOT or city taxpayers. If smartly negotiated by the mayor’s office, federal funds could be earmarked to pay back the community for the land that Amtrak would be using.

A bigger, better station, well sited to serve Washington commuters, and attractive landscaping along the new right of way, removing the current clutter of abandoned factories and forlorn housing, could finally jump-start efforts to rebuild the community.
___________________________
Gerald Neily is a former transportation planner at the Baltimore Department of Planning.