Parents and neighbors of Abbottston Elementary School protested the school’s proposed closure today, calling it a classic neighborhood school, walking distance away from families who in many cases don’t have cars.

Abbottston, at 1300 Gorsuch Avenue in Waverly, is one of six schools recommended for closure by Baltimore City Public Schools in its annual portfolio review.

It is slated to close in June of 2015 because of low enrollment.

“As of September 30, 2014, Abbottston Elementary School has 164 students in kindergarten through grade 5 (and an additional 22 in Pre-k),” the school system’s portfolio review states. “This represents an enrollment decline of approximately 33% in the last seven years.”

Councilwoman Mary Pat Clarke, who represents the district where the school is located, maintains that City Schools have the wrong numbers and that enrollment at Abbottston is actually rising.

“We got 30 new kids this year,” said Clarke at a news conference she held outside the school building, which attracted media and about 20 other people. “All we need is one more Pre-k class – which are very much in demand – and our problems will be solved.”

Parents say Abbottston’s principal is actively trying to get another Pre-K class.

“She has the room and a teacher. She just needs to get permission from City Schools,” Clarke said.

If Abbottston does close, its students would be rezoned to Waverly Elementary/Middle School, at 3400 Ellerslie Avenue, about ten blocks away. (Abbottston shares the building with a middle school, the Stadium School, that would remain there.)

Parents who attended the protest said that Waverly Elementary/Middle is too far away and that walkable neighborhood schools, like Abbottston, are invaluable.

Brandee Peterson, who has three children at Abbottston, says it is convenient and her kids are doing well there. 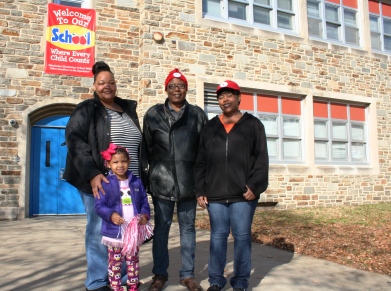 Parents came to a press conference today to protest the planned closure of Abbottston Elementary School in Waverly. (Photo by Danielle Sweeney)

Janice Foreman, who has a grandson in the third grade, says she graduated from Abbottson herself, and so did her daughter.

“Busing the kids to Waverly would be a mess,” Foreman says. “A lot of people don’t have cars here. It’s a long walk.”

“I don’t think they have crossing guards at 33rd St., do they?” she added.

Waverly underutilized? Or Not?

City Schools says rezoning Abbottston students would increase the utilization rate of the Waverly Elementary Middle building from 67% to 85%.

But Clarke maintains that Waverly isn’t underutilized – and doesn’t need boosting. “By this time next year, Waverly will be at 85% to 90% capacity, with students from its zone as well as students attending its new citywide academic programs.”

“I think the problem,” she added,  is that City Schools can’t count.”

The Greater Homewood Community Corporation, apparently, agrees. It sent a letter to the School Board and Superintendent Gregory Thornton maintaining that Waverly is not “underutilized” and protesting the possible “redrawing” of Waverly’s school zone without community engagement.

Some at the meeting said Waverly parents are unhappy about the idea of  taking in the Abbottston students because they fear it would jeopardize the student enrichment programs planned for Waverly.