In 2012, a payroll clerk at the Traffic Management Control Center was caught by the Inspector General manipulating her hours to secure almost $28,000 in overtime.

Two years later, the clerk’s supervisor, Hazel V. Crowell, has been fingered for doing the same thing, this time charging $13,726 in fraudulent overtime.

In addition to using the city’s E-Time payroll coding to game the system and pad their pay, both employees benefited from “deficiencies in payroll processing and oversight” that persisted despite pledges by the agency to correct them, Inspector General Robert H. Pearre Jr. reported.

The Crowell case – disclosed in a report issued shortly before the start of the Thanksgiving holiday – comes at a time when other Department of Transportation employees have been accused of financial improprieties.

A DOT employee was indicted by a city grand jury for falsely billing over $70,000 in overtime, while the former head of the Charm City Circulator was accused by federal prosecutors of soliciting $20,000 in bribes for bus advertising and trying to sell city bus shelters for $70,000.

DOT’s deputy manager of towing, Babatunde Yussuf, recently pleaded guilty to forging vehicle ownership information of impounded vehicles to benefit family and friends to the tune of $22,507. A report on his scheme was released by the IG’s office on November 5.

The latest case involves a 28-year veteran of city government.

Crowell is accused of converting compensatory time to paid overtime by entering false data on the payroll system. On-line records show that Crowell’s salary as office supervisor at DOT’s Traffic Management Control Center was $44,794, but she was paid nearly $61,000 last year from added overtime. 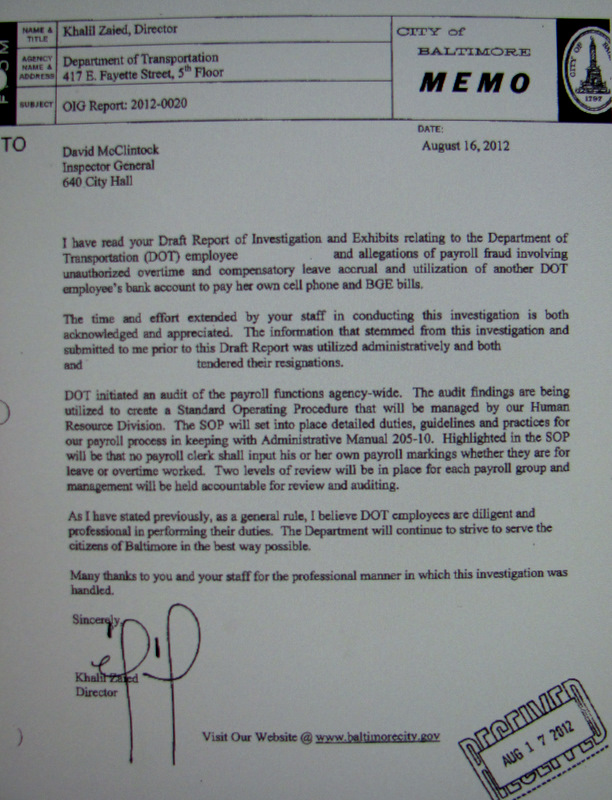 As DOT Director Khalil Zaied was promising to clean up payroll operations in 2012, Hazel Crowell was starting her scheme to dupe the city, according to the IG.

At the time, McClintock faulted Crowell for failing to properly supervise the employee, who was able to receive 20-30 hours of overtime each pay period through false E-Time entries.

The unnamed employee was fired – but never criminally charged – and Crowell was handed the responsibility for encoding the payroll.

Khalil A. Zaied, then director of DOT, promised to conduct an audit of payroll functions and establish a SOP (Standard Operating Procedure) after the scandal.

But nothing substantive ever happened, according to Pearre.

“No such SOP has been implemented but a draft SOP [is] in process,” the IG report said last week. Regarding the audit Zaied said he had initiated, “an incomplete draft of [a] DOT Payroll Review report” was located by investigators, but none of its recommendations were followed by the agency’s staff.

As a result, Crowell was able to process her own payroll forms on E-Time. Investigators found 106 instances of improper overtime coding between August 2012 and January 2014, when a questionable entry Crowell had posted was “noticed” by the department.

In the following weeks, DOT management and IG investigators found that Crowell had posted many hours of unauthorized overtime and converted her approved compensatory time to paid overtime.

A review of surveillance footage also showed her leaving the traffic management center at 414 North Calvert Street earlier than the times she reported.

Crowell resigned in February. On November 21, the city filed a civil suit against her in Baltimore District Court to retrieve her allegedly fraudulent overtime payments.

DOT did not respond to a request last week for comment about the the Crowell case and agency’s failure to implement payroll controls according to the IG report.

Zaied, who was promoted from DOT director to deputy chief of operations, also has not replied to questions from The Brew. In his new position, Zaied is responsible for supervising DOT operations for Mayor Stephanie Rawlings-Blake.

Kevin R. Harris, spokesman for the mayor, did not respond to a request for comment. The Department of Finance recently disclosed that DOT will be one of five city agencies undergoing a voter-mandated audit next year, but has not yet offered any details.