The expensive pipe repairs that Mayor Stephanie Rawlings-Blake and Public Works director Rudy Chow have warned residents about – while encouraging them to buy a private pipe warranty plan – have so far failed to materialize.

At a legislative oversight hearing on Monday, Rudy Chow reported that the HomeServe USA, the company sanctioned by the city to do “lateral” water and sewer repairs on homeowners’ properties, had performed 122 repairs and “saved” Baltimoreans more than $140,000.

He gave the average cost of pipe work as $1,150 without the HomeServe warranty, a figure that was repeated in a DPW press release issued on Tuesday.

It is one-quarter of the cost cited by Rawlings-Blake at a May 28 press conference when, touting the HomeServe plan, she asked: “How many people would be able to pay for that [a pipe break] if they got hit with a $4,000 bill?”

Letter from City was “Frightening”

Chow was called to answer questions from the Council’s Taxation, Finance and Economic Development Committee about the “affinity marketing” campaign that Public Works co-launched with HomeServe last August.

Rev. Alvin C. Hathaway, pastor of Union Baptist Church, told the Council that when he got the letter from HomeServe – emblazoned with the city’s seal and signed by Rudy Chow – he was scared and confused.

Hathaway said when he started to research HomeServe he began having doubts, especially after he read that County Executive Kevin Kamenetz had warned Baltimore County residents not to pay for pipe warranty plans.

He said he cancelled his check.

Hathaway questioned why the Rawlings-Blake administration had entered into the HomeServe contract without any public hearings or discussion of alternatives to the warranty plan.

(Baltimore County offers to loan money to qualified homeowners for connection repairs and pay off the debt over 40 years at 5% interest. Kamenetz’s executive order about the county plan is here.)

“Baltimore City should be our ally,” Hathaway told the committee. 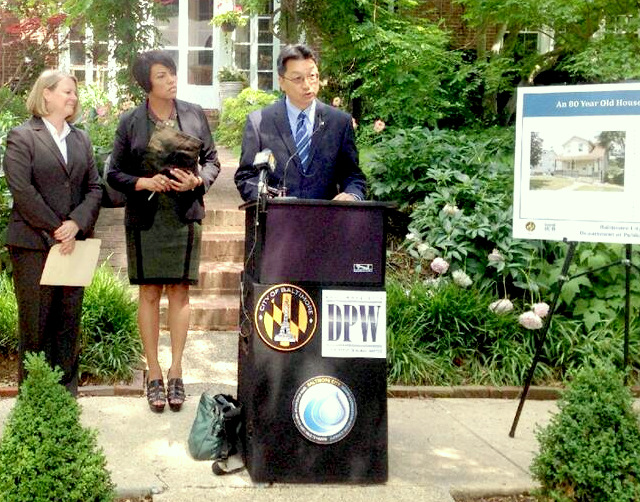 Committee chairman Carl Stokes said the HomeServe solicitation that was mailed to homeowners in August under Chow’s signature was, indeed, confusing.

“Really,” Stokes said to Chow, “it looks pretty official. Why such a seal? Has Baltimore done this [co-branding] for any other service?”

Stokes went on, “When I get my gas and electric bill, it is clear to me that I can buy my electric from other companies – that I have other options,” he said.

“It’s not clear here. Why did we pick one option for our citizens. When did we become such a Big Brother?”

“We Are Behind One Company”

Chow replied that protecting residents from expensive repair bills was the mayor’s idea, hatched two years ago. DPW sent out a “Request for Proposals,” getting back four bids from which HomeServe was selected.

It was important, Chow said, for the city to vet companies in advance of the program, and for residents to know that among the many groups that sell such warranties, the city supports only one.

“We are behind one company. That is HomeServe,” Chow said. “HomeServe had been soliciting for a few years here already.”

Chow said the city chose HomeServe for a variety of reasons, one because it offered the lowest cost for its warranty service.

“That was not clear in the solicitation,” Stokes said.

“After the introductory rate of $5.99 a month,” Chow told the committee “we locked in a renewal rate of $8.49 per month for three years.”

Jeff Raymond, a spokesman for DPW, later clarified what Chow meant.  After the introductory rate of $5.99 a month for one year, customers will pay the regular HomeServe rate, Raymond said. The regular rate is currently set at $8.49 per month.

“So that is what Baltimore customers will pay in year two of the agreement. Those are the only years for which we know the rates,” Raymond wrote in an email.

Stokes asked Chow if he knew HomeServe was an international company – and one that had paid fines for deceptive solicitations in Great Britain as well as in Massachusetts, Ohio, Kentucky and other states.

“I thought it was a national company, and I don’t know any service company that doesn’t have complaints,” Chow replied. “We have oversight of the contract.”

Chow told the committee, more than once, that HomeServe employs master plumbers, the highest level of licensing, implying that HomeServe used them exclusively.

The HomeServe website, however, refers to their workers as technicians. When asked if all the plumbers are master plumbers, Myles Meehan, senior vice president for public affairs at HomeServe, said this in an email to The Brew:

In a press release released on Wednesday, DPW boasted about Homeserve’s success and how much money it is “saving” Baltimore homeowners.

Chow offers another endorsement in the release, saying, “The importance of this optional, affordable service protection program has been proven to more than 100 of our residents who have already had repairs covered by it.”

HomeServe USA CEO Tom Rusin is quoted in the DPW release as saying, “We’re pleased to have saved them more than $100,000 already. As the winter weather approaches, we encourage area residents to investigate whether these protection plans may make sense for them.”

HomeServe pipe repairs are guaranteed for one year.