Max Pollock can talk about bricks all day long.

The minutiae of forged clay building blocks – their composition, their history, their nomenclature – is his hobby, if not obsession. (He has a collection of more than 1,000 bricks, many on display in his Seton Hill rowhouse.)

The former urban planner is well suited to his job as manager of materials at Details Deconstruction, a nonprofit that is deconstructing (the term they prefer to demolishing) the 2300 block of Eager Street in East Baltimore’s Milton-Montford neighborhood.

The 35 rowhouses on the block, the oldest built in 1907, are now vacant and deteriorated and being taken apart.

After Details removes the houses, piece by piece, and sells the usable materials (primarily the bricks and structural lumber), Milton-Montford is set to get a new park. Details is a social enterprise initiative of Humanim funded by the city to take on the project.

“Our mission at Details is job creation and workforce training,” Pollock says. “Our workers are getting an entre to the construction trades.” 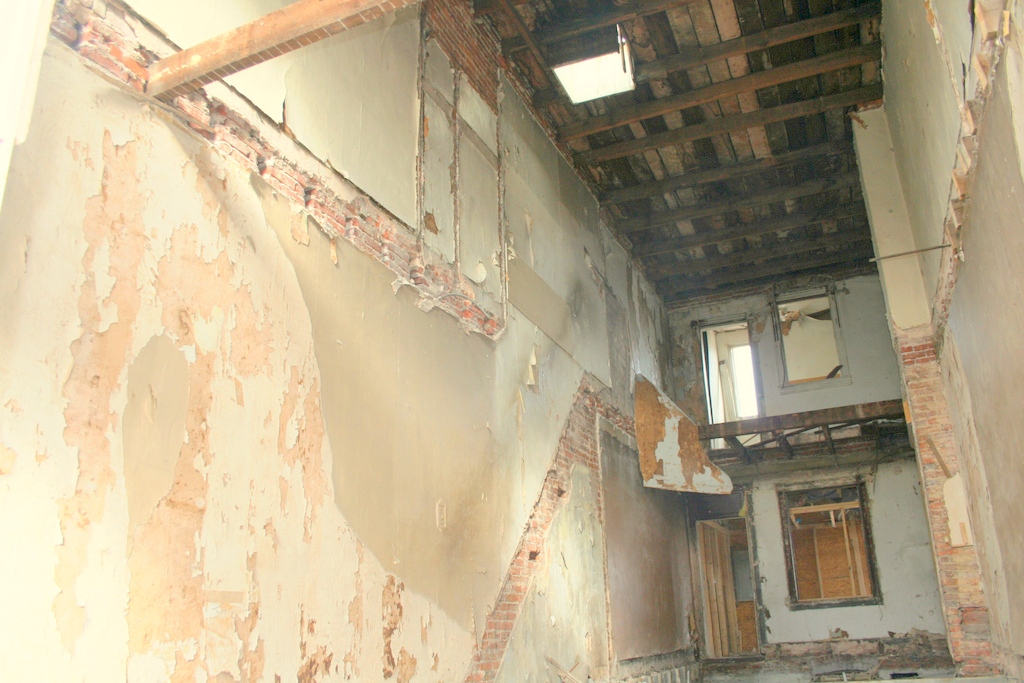 The gutted interior of a rowhouse in the 2300 block of East Eager Street. (Danielle Sweeney)

The political issues raised by the labor-intensive salvaging, razing and re-purposing of a once-occupied city block may be complex and sensitive, but Pollock finds satisfaction in his everyday part of the project: preserving the materials and the memories he finds there.

A Story of Home Life

To document the deconstruction process, Pollock created a blog called Baltimore Brick by Brick. The blog shares what the Details staff found inside the homes and records the history of the neighborhood.

Traditional demolition, he says, destroys a building in its entirety and tends to destroy its history as well. 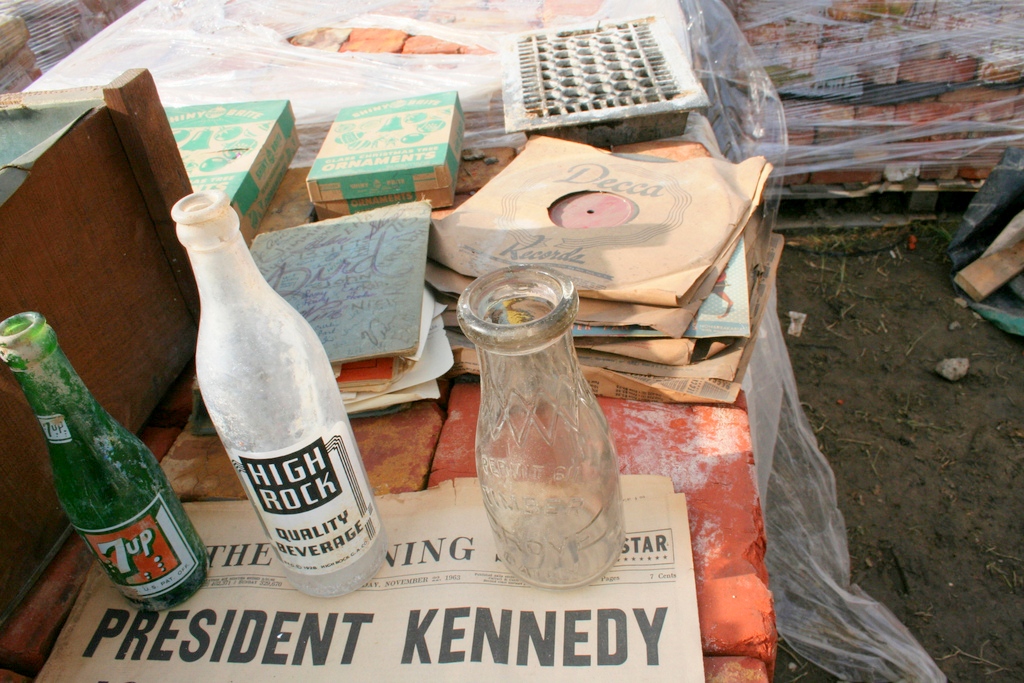 Objects found in the rowhouses range from diaries and soda bottles to old 45’s. (Danielle Sweeney)

As Details disassembled the houses, they found items that the former occupants left behind – milk bottles, old newspapers, a piano, LPs, a high school girl’s journal and old Christmas decorations.

The blog even has a photo gallery of old wallpaper found peeling on the walls of the homes, its original appeal evident and some of its beauty still intact.

A Street of Residents

Pollock has done research on Milton-Montford, particularly the families of many ethnic groups who lived on the block at different points in its history.

Here is an excerpt from a blog entry for the home at 2410 Eager Street:

1940: James Trjnecky, an apprentice linesman with his wife, Rose, and son Jerome.
1930: Mary Hlubeck, a Czech widow who lived there with her two daughters, Anna and Mary. Mary did housework for a private family, and her daughter Anna worked as a salesperson at a dry goods store.
1920: Albert Smcrina, a Bohemian clothing wholesaler, along with his wife, Bessie, and daughter Mildred, lived in 2410.
1910: Frederic Thon, an osteopath, lived with his wife, Mary, a psychic healer.

Pollock also interviewed current residents of Eager Street area, who remember the block when it was a stable part of East Baltimore.

“Mrs. Mabel,” who moved to Eager St. in 1965 and now lives around the corner, told Pollock that the community took a turn for the worse in the late 1980s. 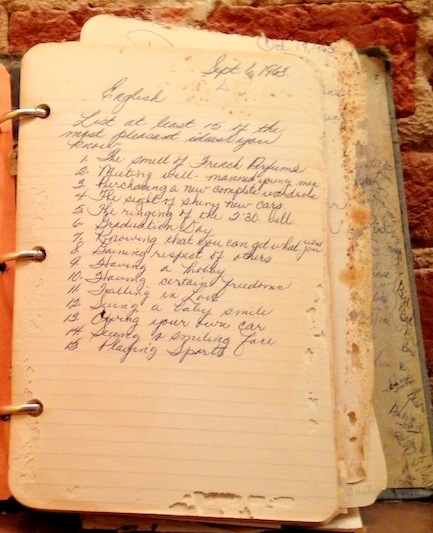 A schoolgirl’s notebook found in one of the houses. (baltimorebrickbybrick.com)

“This used to be a lively little neighborhood, and then we started having problems with drug dealers on the corners. People moved out, and most of the time people didn’t move back in,” she says.

“Landlords weren’t fixing the houses up. And then people would move out, drugs and stuff started moving in, and nobody really moving back into the neighborhood.”

Details has salvaged about 40,000 bricks from the site, all “Baltimore Brick” by the Baltimore Brick Co., which Pollock says was among the best brick manufactured in the U.S.

“Baltimore Brick was of the highest quality because of good clay,” he says, pointing to the myth of city brick was shoddy and needed Formstone to protect it. 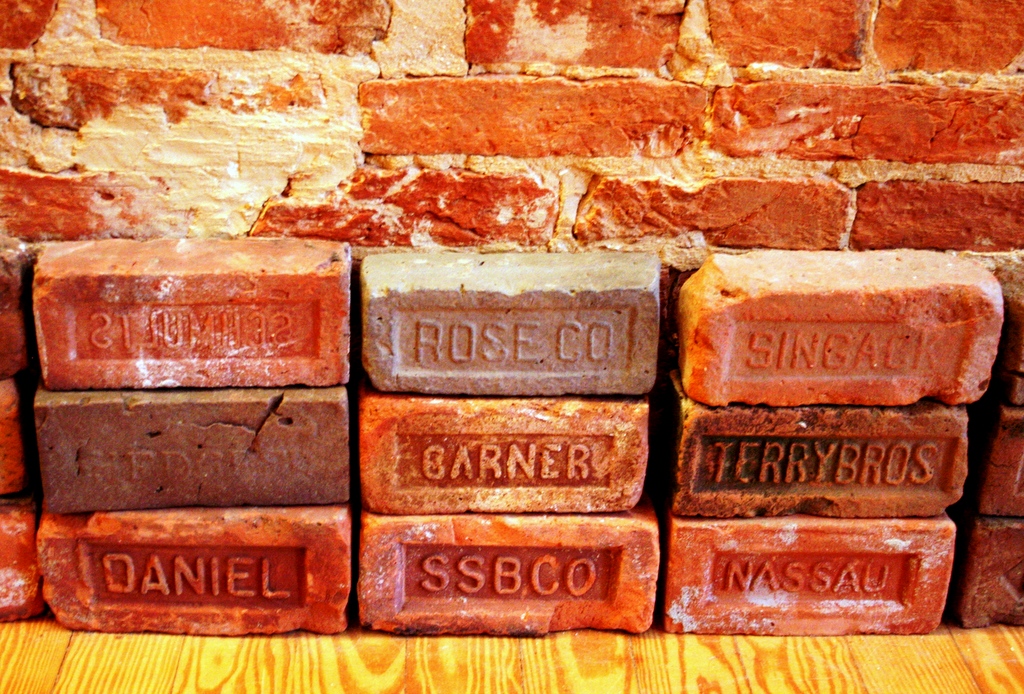 A sample of Pollock’s brick collection. The bricks are imprinted with the names of their manufacturers, many from the Hudson Valley area. (Danielle Sweeney)

Pollock says this was a salesmen’s fib, if not flat-out lie.

“Sure, by the time Formstone salesmen were making their rounds in the 1940s and 1950s, a lot of row houses were old already and maybe needed re-pointing, but most Baltimore brick never needed protecting” from the much-maligned artificial stone.

Another high quality brick you find in Baltimore, he says, is Sparta brick. It was made in Central Ohio and has high iron content.

“When it was fired in the kiln, it got black spots on it. You see it in a lot of East Baltimore houses,” he says. “That brick will last forever.”

Pollock’s personal collection of bricks, each marked with the names of their various manufacturers, is mostly from the Hudson River Valley area.

To a brick collector, the region appears to be what the Rhone Valley is to wine lovers: “The Hudson is a brick hunter’s dream,” he says rhapsodically.

But good, interesting bricks are ubiquitous all over the U.S., including this city. “Once you start looking for them,” he beams, “you see them everywhere.” 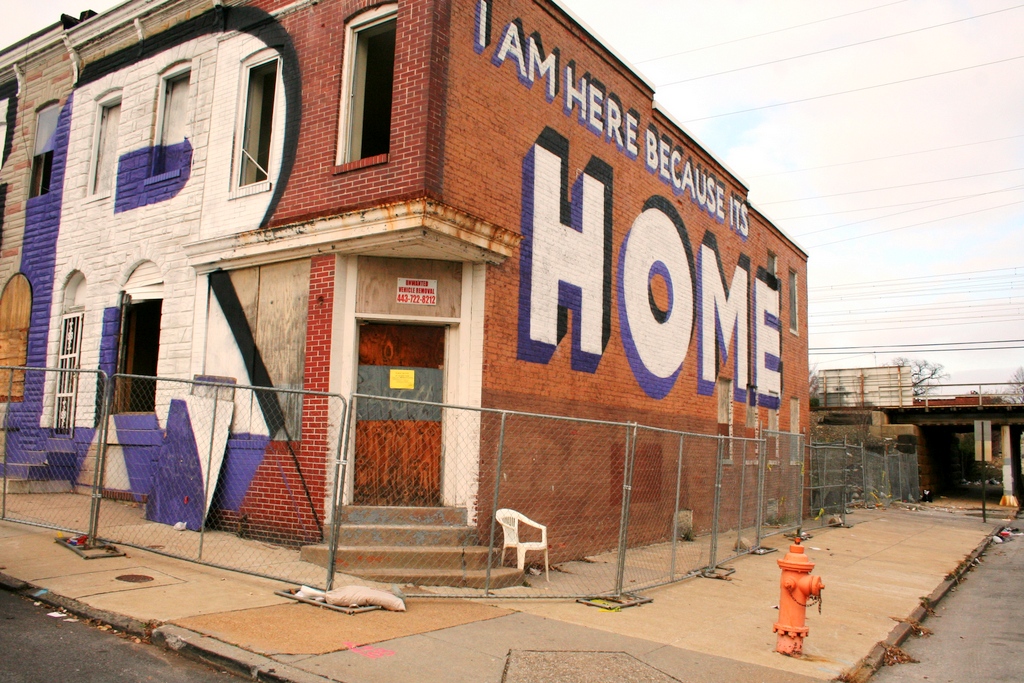