BUCKEYSTOWN, MD. – At a closed-door meeting today at a retreat center, officials of the Maryland Episcopal Diocese gave rank-and-file clergy an account of some of the events that followed Suffragan Bishop Heather Cook’s fatal car crash with bicyclist Tom Palermo.

According to a statement released after the meeting, Cook, the diocese’s No. 2 official, remains on administrative leave, “receiving pay and benefits in accordance with standard denominational practice.”

The release did not disclose any of her statements to police following the December 27 crash, or whether there was any evidence of intoxication or other impairment by the bishop, or whether she underwent a breathalyzer test, or why she left the scene of the accident for 20 minutes or longer and then returned.

(Cook was arrested in 2010 on DUI and drug possession charges while serving in the Diocese of Easton on the Eastern Shore.)

Diocesan Bishop Eugene Taylor Sutton opened the meeting with a prayer from First Corinthians and then turned the 2½-hour session over to a facilitator from Loyola University.

The overwhelming sentiment of the meeting was compassion for the Palermo family, which includes a wife and two young children, a church spokesman said.

But some of the 70 clergy in attendance also expressed “anger and disappointment” at the diocese, said another person who attended the meeting.

“One of them asked for an apology” from church officials for nominating Cook as Suffragan Bishop last year without disclosing her DUI arrest record. “He didn’t get it,” the source added.

Bishop Sutton and the chair of the search committee were aware of her arrest record, the source said the clergy were told today. (In an earlier statement, the church said of the decision to allow her candidacy to go forward: “After extensive discussion and discernment about the incident, and after further investigation, including extensive background check and psychological investigation, it was determined that this one mistake should not bar her for consideration as a leader.”)

Today’s statement said that church officials are cooperating fully with an investigation of the crash by Baltimore City Police and have begun an internal investigation of the incident at the request of Bishop Katharine Jefferts Schori, Primate of the Episcopal Church of the U.S.

“We cannot disclose details of that investigation, as they are constrained by church disciplinary procedures under canon law,” the statement said.

Because the meeting was not open to the media, The Brew is publishing the “summary of information” that was reportedly shared with the clergy at the Bishop Claggett Center by the Rev. Scott Slater, chief assistant to Bishop Sutton.

“At 2:59 p.m. [on December 27], Slater received a call from Heather Cook. She said she thought she had hit a bicyclist and was in shock. When Slater arrived at the accident scene around 3:10 p.m. police crime scene tape was surrounding Cook’s car and she was sitting in a patrol car. He immediately identified himself to an officer, provided his identification and business card. He told the officer that Cook had called him minutes before.

“During the course of the afternoon, Slater called Bishop Sutton and informed him of what he knew; gave a detective his statement regarding his and Cook’s phone conversation; and contacted Jeff Ayres, diocesan chancellor (attorney), and informed him of the incident. He did not speak to Cook at that time.

“At 5:27 p.m. that evening, Slater received a call from the Baltimore City Police Department asking him to come pick Cook up.

“Once at her apartment, he went in for a few minutes and talked with Cook and a friend of Cook’s who had just gotten there to check on her dog and to make sure she wasn’t alone. Slater focused his conversation pastorally on her, as a child of God. They prayed together and he went home.

“On Monday evening [December 29], Slater was asked to return to the police station to give a recorded statement. He answered every question as thoroughly and completely as he could recall, including details of his and Cook’s conversation during the car ride to her apartment.” 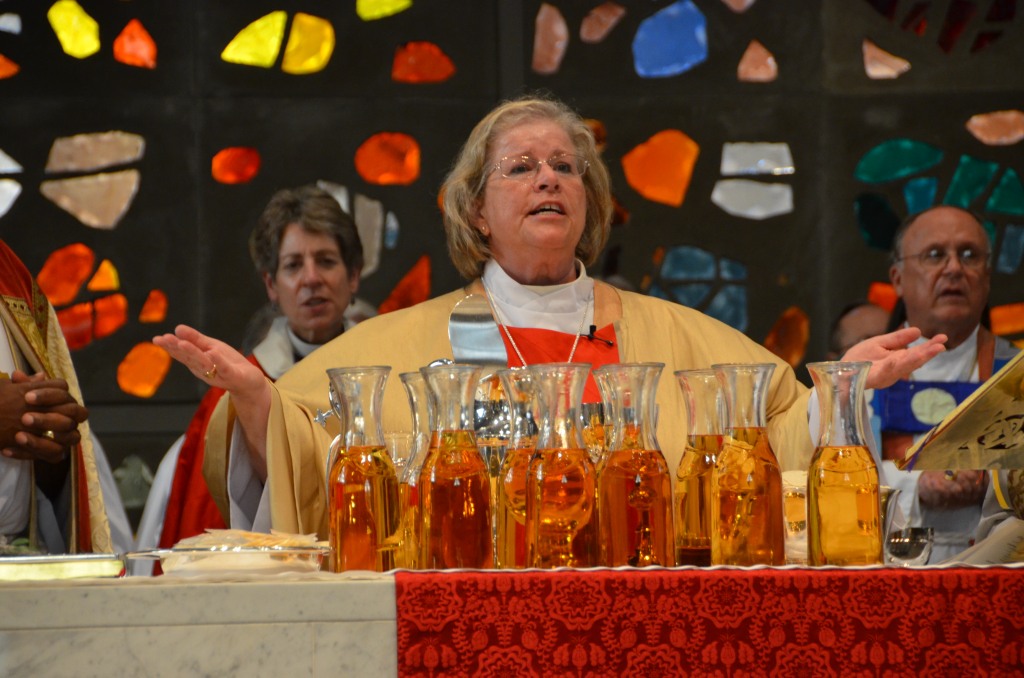 Heather Cook at her ordination last September. To her right is Primate Katharine Jefferts Schori, chief consecrator at the ordination who has ordered a church investigation of the fatal crash. (Episcopal Diocese of Maryland)

Speaking to reporters after the meeting, Slater said, “We’re hoping, like the rest of the world, that the police will not wait until the end of their investigation to give some information.”

He said the church’s own internal investigation should take about three weeks to complete.