To help improve student transit, the Baltimore Public School System outlined its numerous student transportation challenges, inefficiencies, and barriers  with uncommon candor this Saturday at the student transit hack, a partnership between the school system and tech organization Hack Baltimore.

Chief among them is the budget. John Land, deputy COO for the school system, said the agency has a $34 million transportation budget, but is spending $43 million and still struggles to be successful.

Gregory Thornton, schools CEO, attended most of the six-hour event held at the Baltimore Design School, and said the dozen or so school staff accompanying him were on hand to “tear down walls” and make information gathering as easy as possible for the tech teams to help improve the student transit system.

40% Miss a Month or More of School

Jane Sundius, a hack participant and director of education and youth development for the Open Society Institute – Baltimore, then raised her hand and put the problem in context.

“Forty percent of our high school students miss a month or more of school days a year,” she said. “We have the highest absenteeism rate in the state, by quite a bit.”

One reason  students have a hard time getting to school is because the MTA, which most high school students use on for transportation, can be unreliable.

Michael Walk, MTA’s director of service development, said since MTA is a route-based, commuter-focused system, and funded by the Federal Transit Administration, by law it can’t run school-centric bus lines.

What MTA can do and does do is run “trippers,” which are buses routed to schools during peak school travel time.

Two students from Patterson High and Dunbar High School told  hack attendees that MTA bus service was chronically slow and that buses sometimes leave schools when they are not even full. 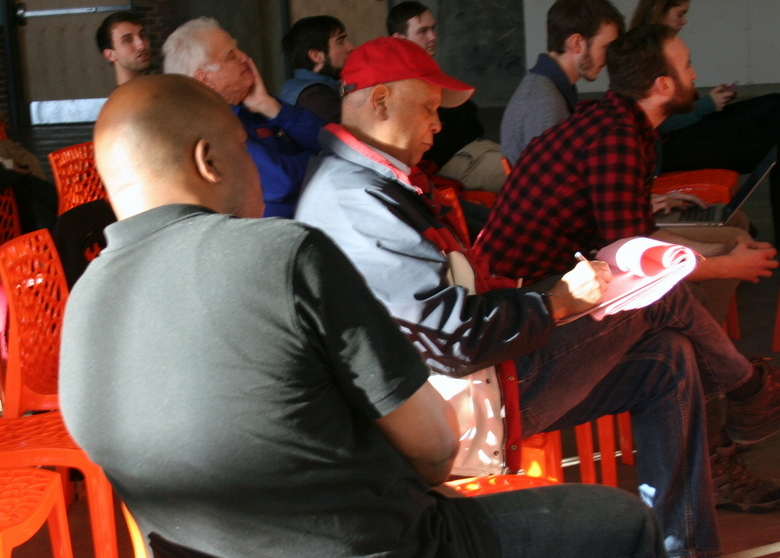 They added that since MTA buses lack “real time” tracking, students have no way of knowing when the next bus will come.

Walk replied, “No, we don’t have real time data. That’s not available yet.”

He encouraged students to use the MTA’s Rate Your Ride feedback system to document their experiences with MTA’s delays.

He also suggested the school system look into a way students could get discounted bicycles and provide their own transportation to school – as a low-tech hack – to reduce their reliance on MTA to get to school.

“That way, students will have the independence to get to school whether the bus comes or not,” Walk said.

Hour to Get to School on a Yellow Bus

The city’s yellow school buses serve elementary and middle students who live more than a mile-and-a-half from school, but predominantly serve preschool, ESOL (ESOL is not offered at every school), homeless and special needs students.

The system runs between 250-300 buses a day all over the city, serving an average of 4,000 children, with approximately 30 children to a bus. Much of this service is door to door.

The school system has a contract for 286 yellow buses and owns 49 more but arrival times are slow and variable.

Renee Jones, a school bus router, said she strives to get students on a bus route (software does the actual routing) closest to their homes, but that is not always possible.

“Ride times are close to an hour,” she said.”We try not to let it get past ninety minutes.”

One reason for the long ride time is because the school system is short on operable buses. In addition to the 286 contracted buses, the system owns  another 49.

“But we have only 30 certified drivers,” said Keith Scroggins, City Schools COO. “It’s hard to find drivers who can pass the background checks needed to drive a school bus.”

Scroggins said if they had more drivers, they could run more buses.

One hacker suggested minivans would be less costly than cabs, and easier to access than buses. Scroggins agreed, but said the state requires the system to transport students in cabs or buses.

“We can’t use vans – or we would be using plenty of them,” he replied.

Jennifer McDowell, a community school coordinator at John Eager Howard Elementary, told her fellow hackers about one transit problem her students experience. It can take seven days or more for a homeless student to get “routed” for school transportation via bus or cab.

“During that time, kids often won’t come to school,’”she said.

School bus router Jones said that the system has a multi-step process for qualifying homeless students for transportation, which  the school is required to provide free by law, even if the student is residing outside of the city.

“Add to that that homeless kids are always moving around, and a child could move twice before I complete their first routing request,” Jones noted.

To help reduce absenteeism, McDowell said her school got a grant to provide students with cabs to school until they were routed with permanent transportation.

“This way, the children can keep going to school, where they are comfortable and people know their families, and they can get services like food and medical care,” McDowell said.

But citywide, most kids just have to wait until they are routed. 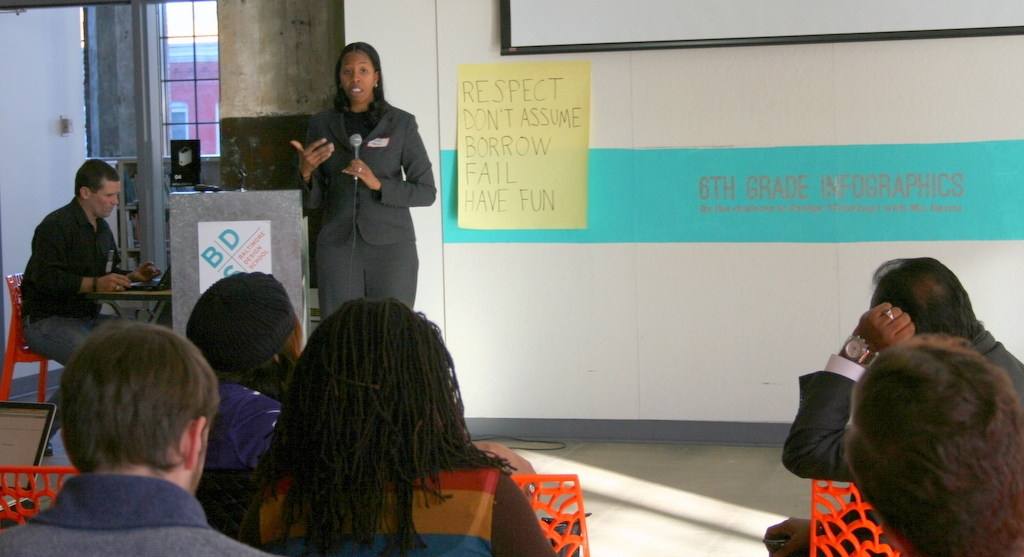 Zulema Moore, principal at the Baer School, gives a presentation on her group’s hack proposal. (Photo by Danielle Sweeney)

Where is my Bus?

She said prompt and predictable transportation is especially important when children are on feeding tube schedules and have battery operated ventilators.

She came to the hack to brainstorm an “Uber-type” phone app that parents could use to determine when their child’s school bus was arriving (so they don’t have to stand outside) and when their kids arrive at school.

Currently, parents don’t know when the bus is coming and call the school to confirm when their students arrive.

Scroggins said that the school system is planning on getting GPS systems for all yellow buses it uses.

“But it will cost $7 million,” he said. “I just don’t want people to get the idea we’re not thinking about technology.”

At the end of the six-hour hack, five ideas were awarded funding.

One hacker group is designing a student-citizen ride sharing app. Another, led by Moore, is implementing a real-time data and tracking system so Baer School parents know how close their child’s school bus is to their home.

A third hacker group proposed to map school transit “deserts” and establish transit “hubs” for those areas, while another will use analytics to predict which Baltimore students are most likely to become homeless, to better optimize school bus and transit routing.

Project teams have 60 days to develop their ideas into prototypes (demo day is February 28). City Schools will implemented the most successful projects next school year.