The Baltimore Department of Transportation is requesting over $50,000, mostly for a consultant, to help it raise private funds to provide free bicycles to K-8 school children.

An allocation of $45,818 is set to be awarded to McCormick Taylor, a Philadelphia-based consultant, with an additional $6,874 for in-house administrative costs, according to the request before tomorrow’s Board of Estimates meeting.

The expenses will go toward the agency’s so-far-unpublicized effort to give away bikes to children to stimulate “awareness and enthusiasm” for cycling in Baltimore.

The push for free bikes for school kids comes at a time when promised safety improvements for bike lanes are bogged down in red tape and delays.

Last spring, DOT said it had the funds to start work on a 2.6-mile cycle track on Maryland Avenue/Cathedral Street from 29th to Pratt streets.

The track would feature two six-foot-wide bike lanes protected with curbing and parked cars from vehicular traffic. The project has been postponed, with no official start-up date announced. (DOT, however, has requested full project specifications for the cycle track from Toole Design Group, which would allow the project to be competitively bid in the near future and construction to begin following Board of Estimates approval. Toole will be paid $114,569 for its work, according to BOE records.)

Long-planned east-west bike lanes in Mt. Vernon and downtown, with two legs extending to Johns Hopkins Hospital, have also not been started. (The legs would consist of a pair of lanes on East Madison and Monument streets and on East Biddle and Preston streets).

And, finally, a BikeShare program has made little headway since 2011, in part due to the bankruptcy of a key vendor.

“We think that until the infrastructure is there for safe bicycling, especially for kids going to school, access to bikes is not a high priority,” he said today.

Weeks also warned that without a plan to help children maintain the bikes along the lines of the repair program at Digital Harbor High School, “we might wind up with a bunch of unused bicycles that are falling apart.” 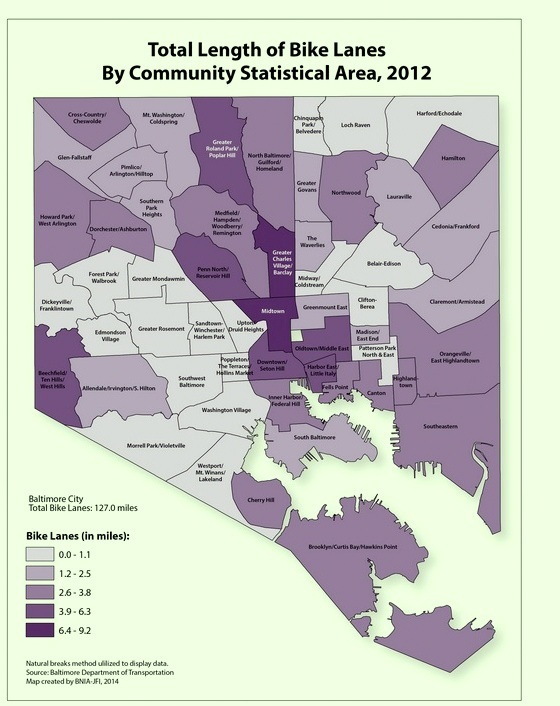 This map, created last year by the Baltimore Neighborhood Indicator Alliance, shows how few (or no) bike lanes are in west, southwest, east and northeast Baltimore where lots of public school children live.

According to tomorrow’s agenda item, the McCormick group will prepare research and outreach for DOT on how to “raise awareness and enthusiasm about safe bicycling in Baltimore City by giving away free bicycles to Baltimore City students.” Another task will be to help the agency develop “donor outreach and fundraising” for the new bikes.

Fundraising by the agency would require an exemption to the city ethics code, which prohibits public employees from soliciting funds from private corporations or citizens because of potential conflicts of interest.