The owner of the popular Canton eatery, Sip & Bite, has been charged with possession with intent to distribute 500 or more grams of cocaine following a federal sting operation in Alexandria, Va.

Anthony “Tony” Vasiliades and accomplice Minas Politis were arrested in a parking lot on Wednesday, January 14, after they handed over $50,000 in cash to a government informer, who gave them two kilograms of cocaine, according to a government affidavit submitted in the U.S. District Court of Eastern Virginia.

After they allegedly took the sack of cocaine and started to drive off, agents from the Drug Enforcement Agency (DEA) blocked the exit and surrounded the car.

Politis and Vasiliades were arraigned before U.S. Magistrate Judge Ivan D. Davis and released. Federal courts do not require bail; however, Vasiliades surrendered his passport and has pledged not to leave the Washington, D.C., metropolitan area, according to court records.

The two charges of conspiracy to possess cocaine with the intent to distribute are punishable by “not less than 10 years” in prison, according to federal sentencing guidelines.

The Vasiliades family have operated the round-the-clock eatery since the 1960s. With a reputation stretching far beyond Baltimore, the restaurant has been featured on TV food shows as well as provided late-night fare for hungry celebrities visiting Baltimore.

Vasiliades could not be reached today, and the Alexandria lawyer who represented the two men in court, John K. Zwerling, did not return a phone call seeking comment.

The sting was organized by agents from the DEA and Arlington Police Department, who had been investigating a Virginia drug ring. 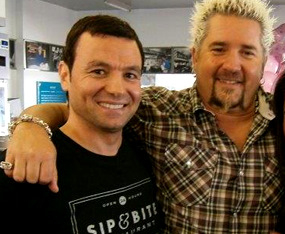 A confidential informant (CS) met Politis, who lives in Baltimore County, at a social gathering last October. The two began discussing sources of supply for cocaine, according to the DEA Special Agent Beau O.C. Bilek.

“The CS stated that Politis, along with Vasiliades, were interested in purchasing kilogram quantities of cocaine and believed CS has connections to facilitate this transaction,” Bilek said in the affidavit.

After a meeting in Washington, D.C., the group agreed to swap “two for fifty” (spoken in Greek), meaning two kilograms of cocaine for $50,000, a few days before the Arlington rendezvous, according to a cell phone conversation cited in the affidavit.

An undercover detective, posing as the source of supply for the cocaine, accompanied the CS to a restaurant parking lot at 2:30 p.m. on January 14 where they made the exchange with the defendants, according to Bilek.

The DEA agents then moved in for the arrests.