In an official church “timeline of events” in the Heather Cook case, Maryland Episcopal Bishop Eugene Taylor Sutton says he “suspected” Cook of being drunk at a dinner two nights before she was consecrated as a bishop.

“It was a private dinner at a restaurant on September 4” in Baltimore, Sharon Tillman, the diocesan spokeswoman, told The Brew today. “It was a spouses kind of thing.”

In attendance, Tillman said, were Sutton and his wife; Katharine Jefferts Schori, Presiding Bishop of the national Episcopal Church, and her husband; and Heather Cook and her “steady companion,” defrocked Episcopal priest Mark Hansen.

The dinner took place when Cook was preparing for the elaborate September 6th ceremony making her the first woman bishop in the Maryland diocese.

The timeline was sent to some members of the media last night and posted on the diocese’s website.

Today the timeline was “clarified” with a significant new fact about Bishop Sutton’s actions following the private dinner.

The timeline notes the following:

“September [2014]: Bishop Sutton suspects that Cook is inebriated during pre-consecration dinner and conveys concern to Presiding Bishop” Jefferts Schori, his superior, as the head of the national church.

This statement was clarified today with the following addition: Sutton conveys his concern to Jefferts Schori “before rehearsal the next morning [September 5].”

The timeline continues: “Presiding Bishop indicates she will discuss with Cook. Cook consecrated a bishop.”

Reframing Aspects of the Crash

The timeline is one of several updates and statements posted by the Episcopal Diocese of Maryland since the fatal crash in December in which Cook drove her car into bicyclist Thomas Palermo on a North Baltimore street and fled the scene.

Jefferts Schori said today, through a spokeswoman, that it would “not be appropriate” to comment on the Maryland diocese’s timeline pending completion of the church’s Title IV disciplinary investigation of Cook.

Cook’s Towson attorney, David B. Irwin, could not be reached for comment.

The diocese’s two-page timeline language gives the church and Sutton an opportunity to rephrase and reframe a much-criticized earlier statement about the December 27 crash that killed Palermo and left Cook facing multiple charges, including manslaughter, drunk driving and leaving the scene of a fatal accident.

Sutton’s initial memorandum to clergy, issued a day after the crash, presented the information in a way that seemed to defend Bishop Cook and minimize the fact that she left the scene.

“Several news agencies have reported this as a ‘hit and run.’ Bishop Cook did leave the scene initially, but returned after about 20 minutes to take responsibility for her actions,” Sutton wrote, according to the text of the memo first published by The Brew.

In the new timeline, the diocese acknowledges that Cook was away from the fatal accident scene longer – and also distances the diocese from the Episcopal clergywoman:

“I had no Evidence,” Sutton told Congregation

The timeline, however, appears at odds with Bishop Sutton’s statements made on January 15 at the Holy Comforter Church in Lutherville, at a meeting called by the bishop to address the Cook case and to begin the “healing” process.

In response to questions from the audience, Sutton said he had no indication that Cook had a drinking problem. Asked specifically if he had knowledge prior to December 27 that Cook was an alcoholic, Sutton said, “The reality is that we had zero indication.”

Pressed some more, he said, “Was she an alcoholic? In the process that was never said to us, although questions were asked.”

Asked again if he had personal knowledge of her drinking problem, Sutton said, “I had no evidence,” explaining that Cook’s 2010 DUI was handled by the Easton Diocese, where she then served as canon ordinary to Bishop James J. “Bud” Shand.

Based on a conversation Sutton said he had with Shand and others, “What we were informed was that there was no problem. . . No indication that she was alcoholic. That this [the DUI] was a one-time event.”

Sutton never brought up the September 4 dinner with Cook, or his suspicions of her inebriation, at the Lutherville church meeting.

Conversations with Shand and Jefferts Schori

The new timeline begins in October 2013, with the Search Committee interviewing potential nominees and noting that background checks were completed by “Oxford Documents investigator.”

By December, the Search Committee, Bishop Sutton and “the denominational officer in charge of bishop searches” have been informed of her 2010 DUI  on the Eastern Shore and interviewed Cook about it.

In January 2014, the diocese’s Standing Committee is informed that an unidentified candidate has a DUI, but goes ahead and presents the final slate.

Sutton, subsequently in January, has “a bishop-to-bishop conversation” with Cook’s Easton superior, Bishop Shand, in which Shand recommends Cook “without concern or reservations.”

Cook fails to mention, according to the timeline, her 2010 DUI in “meet and greet” events held in May along with the other nominees. She is elected bishop suffragan, the No. 2 position in the Maryland diocese.

In a timeline entry titled “Summer,” Sutton again focuses attention on Jefferts Schori, saying that only she knew the results of a psychiatric exam conducted “through” her office. Then comes the suspected September “inebriation” at the private dinner.

In October, there’s another allusion to Presiding Bishop Jefferts Schori and to her subordinate, Clay Matthews, saying that Matthews met with Cook in October: “Details confidential only to the Presiding Bishop’s office.”

Then comes the December crash, her arrest, jail and release on $2.5 million bail.

The diocese timeline comes as Cook is in treatment at the Father Martin’s Ashley treatment center in Havre de Grace, waiting for her case to wind through the judicial system. But the two-page document seems aimed more at the larger question of what Episcopal church leaders knew about Cook’s 2010 DUI on the Eastern Shore before putting her forward for the high-profile position.

It leaves much unclear on that score.

Both Sutton and Jefferts Schori have declined to answer The Brew’s questions about whether they knew the details of the 2010 arrest.

Bishop Shand, now retired from the Easton diocese, also has declined to comment on the case.

But it wasn’t necessary to see court records or arrest reports to understand that Cook’s 2010 incident stemmed from more than one-too-many glasses of wine at dinner.

Headlined “Woman charged with pot possession, drinking, reckless driving,” the September 15, 2010 article describes the arrest of Heather Elizabeth Cook on marijuana and drug paraphernalia charges, as well as driving while under the influence of alcohol, reckless driving, negligent driving and other traffic offenses. 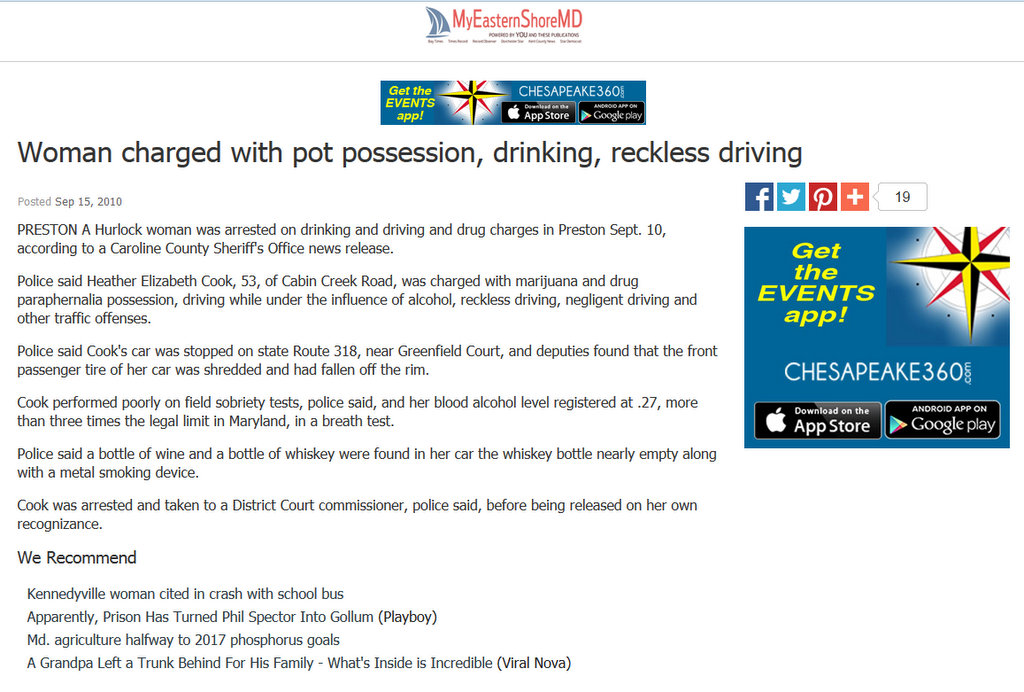 The story doesn’t identify her as a clergywoman or the top assistant to the Easton bishop, but it gives her age and other telling details, including that her passenger tire “was shredded and had fallen off the rim,” that she performed poorly on field sobriety tests, and that a bottle of wine and “nearly empty” bottle of whiskey were found in her car, along with a metal smoking device.

The story, which has remained online since its publication, also clearly notes her level of inebriation: “Her blood alcohol level registered at .27, more than three times the legal limit in Maryland.”

To reach the author:  fern.shen@baltimorebrew.com