There’s a memorable lyric in a song about boxer Ray “Boom Boom” Mancini that goes, “If you can’t take the punches, it don’t mean a thing.”

Frank M. Conaway Sr. was a boxer who took his share of punches, got knocked down on many occasions, but always got back up and came out swinging.

The ruler of a political dynasty who died in his sleep at age 81, Frank was old enough to know hard-core Jim Crow racism, but positive enough to overcome it and become a towering (if not always liked) figure in the city’s business and political worlds.

He was born in Depression-era Baltimore in 1933 when expectations for black citizens were circumscribed by law and custom.

After graduating from Frederick Douglass High School, he joined the Army, which had recently been desegregated by an executive order from President Harry Truman.

His buddies laughed at him when he entered a base-wide boxing contest. They told him he was too small. He surprised everyone when he came in second – and only because, he liked to say, the guy who beat him “really could fight.”

He returned to Baltimore from military service eager to find success. He was one of the first group of black bus drivers for the old Baltimore Transit Co., the private sector predecessor to the MTA.

He picked that job because the shift work would allow him to go to college while he worked. He drove at night and attended class by day, graduating from what then was known as Morgan State College in 1960.

He briefly worked as a school teacher, but his main interest was in commerce. He identified insurance sales as a viable business for a young black man. By the 1950s, a group of black-owned life insurance companies had sprung up to serve a population that had been shunned by the major insurers.

Conaway wasn’t content to operate as a member of a “separate but equal” group. He talked Prudential Insurance Co. into making him their first black agent in Maryland.

“I explained to them,” he said, “that our people died just like white people did, and they wanted to be insured.” He made $35,000 in his first year as a Prudential agent. That translates into $286,000 in 2015 dollars, according to the Bureau of Labor Statistics’ CPI calculator. It was an astounding income for a 20-something man of any race.

Frank was off and running. His business grew quickly – perhaps too quickly. The white insurance agents who catered to minority customers were none too happy.

He drove expensive cars and dressed impeccably. Years later, he revealed one of his haberdashery secrets: he kept a can of aerosol spray in his desk drawer that could give an instant shine to a pair of shoes.

Into the Political Ring

The 1966 gubernatorial election was a turning point for him because the Democratic standard bearer, George Mahoney, openly opposed equal rights. His slogan was “Your home is your castle – protect it.” 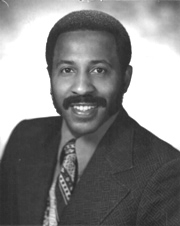 Conaway’s portrait as member of the House of Delegates about 1971. (Maryland Archives)

Such overt racism brought out the boxer in Frank. In the next general election, he ran for House of Delegates and took office in January 1971. He was no shrinking violet.

By design, he refused become a member of the formal leadership of the House because he knew he’d have to vote in lockstep with the powers-that-be, even if it meant voting against his constituents’ best interests.

Black legislators who had worked their way into leadership sent issues to him on the sly for his advocacy that they could not provide themselves. Frank was their designated hitter and, often times, the powers-that-be hit back.

His attention to politics distracted him from his insurance business, and he paid a price for his inattention.

His name was in the news as the State Insurance Commissioner investigated his company in a very public manner. Frank was never formally charged, but he sold the company,  surrendered his insurance license, and gained the lasting animus of the Baltimore Sun.

Down but Not Out

Bad press and redistricting cost him his seat when he ran for re-election in 1974. He tried again in 1978 and returned to the legislature for one term. The rough and tumble of urban politics took a toll in other ways. His first marriage ended acrimoniously. At one point, he was indicted for allegedly trying to buy votes by giving out chicken boxes at a rally.

“I really didn’t think you could go wrong giving out chicken at Mondawmin Mall,” he said. He beat the charge, but the controversy did him no good in the eyes of the establishment.

Still, he kept coming back. A young lawyer named Kurt L. Schmoke had galvanized the black electorate with his campaign for state’s attorney and, later, for mayor. Frank correctly identified the emerging electoral force and managed his new wife Mary’s successful campaign for the obscure office of Register of Wills.

In 1998, he entered a nine-candidate race to become Clerk of the Circuit Court and won. He and Mary now controlled both of the major offices in the Baltimore City Courthouse. She served as Register of Wills until her retirement in 2012; he held onto the Clerk’s post until his death.

Conaway may have mellowed over the years, but he still enjoyed a good spectacle. His campaigns invariably featured a Lincoln Continental automobile covered with “Conaway” bumper stickers from top to bottom. A trusted aide parked it at strategically identified intersections for maximum voter impact.

When the Lincoln Continental gave its last gasp, he replaced it with a van covered with photos of himself, Mary and his children. Election after election, he was the highest vote getter in citywide elections. His success confounded and frustrated other politicians, especially Martin O’Malley. 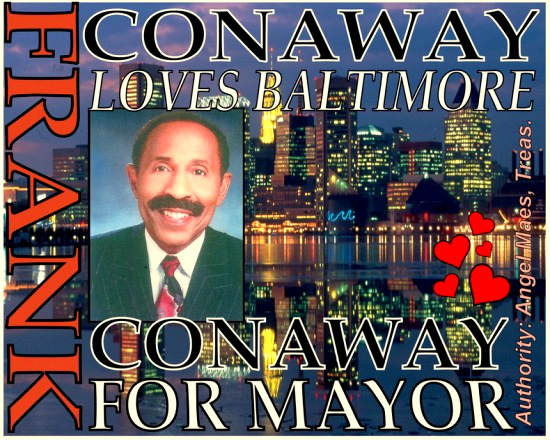 Subtlety was never a characteristic of this irrepressible campaigner, here running unsuccessfully for mayor in 2011. (citythatbreeds.com)

He elevated the Clerk of Court’s office to a whole new level.

He held press conferences on issues that weren’t necessarily related to his official duties.

He gave out smoke detectors to voters and distributed cameras to citizens in high-crime areas.

He bought a scooter with the hopes of riding it for publicity, but abandoned the idea.

His son, Frank Conaway Jr., ran successfully for the House of Delegates. His daughter, Belinda, was elected to the City Council, then defeated in a bitter campaign. Last November, she was elected to Mary Conaway’s old seat as Register of Wills.

At the courthouse, he was confronted by Korean business leaders who wanted forms printed in their language so they could get their business licenses without running afoul of language issues. He told them, “Find some Koreans who can pass the test, and I’ll hire them. You can talk to them in your own language.”

The Koreans returned the favor by contributing to Frank’s fundraisers. Some anonymous person made a complaint, and the state prosecutor investigated Conaway for allegedly “selling jobs” to Koreans for campaign contributions.

The prosecutor specifically inquired about one Korean worker who “disappeared” from his official job for various intervals. When all was said and done, the Korean worker was “found” at another department where he had been called to translate.

Recently, a young man posted an incorrect comment online saying that “the clerk of the court is a felon.” Frank was never convicted of any felony. When I discussed the post with Frank, he said that he was going to ignore it because the young man was just being foolish. He might grow out of it, he said.

Bucking the Powers Once Again

At the swearing-in last December for his fifth term as Court Clerk, Conaway announced that he had joined the Republican Party.

His decision was based on his belief that the Maryland Democratic Party had done nothing for black people for years except use them and take them for granted.

He also wanted to challenge the Republicans and purge some of the racism from their rhetoric.

Frank was fully planning to run for mayor next year as a Republican.

He wanted to challenge Mayor Stephanie Rawlings-Blake to a foot race. “I think I can outrun her,” he told me. “I’ll only be 83.”
____________________________
Mark J. Adams was the publisher of the late, lamented Harbor Crescent and Baltimore Press. He’s been a longtime friend and occasional advisor to the Conaway family.