Saying they’ve worked hard to respond to the nearly 6,000 no-water calls they’ve received since mid-February, the Baltimore Department of Public Works is now down to about 500.

But you’ll pardon the residents of one Southwest Baltimore neighborhood if they don’t applaud the city just yet.

City water stopped flowing for the residents of the 2000 block of Frederick Avenue on February 16 – 17 days ago – and there’s still nothing coming out of their faucets.

“I know the city has had a lot to deal with, with all the cold weather but this long is too much,” said Max Eilbacher, who lives on that block and, like his neighbors, has been making multiple 311 complaints to the city.

“I have to think if we were in Charles Village or some other neighborhood, we wouldn’t be forgotten like this,” he said.

The Brew inquired about the block’s continuing problem last week, but has received no reply as yet from DPW.

But a few days after our inquiry, a DPW crew came out.

“DPW worked for about three hours six days ago and said they would come back and have not,” Eilbacher said today, via text. The water is still out and residents have been calling 311, he said, “almost every day.”

Eilbacher also noted that their calls to 9th District Councilman William “Pete” Welch have not been returned.

It’s hard to know whether today’s 4-6 inches of snow will be winter’s last gasp, but it’s safe to say the season has been brutal to Baltimore’s infrastructure and residents’ pipes – as well as (thanks to slippery snow and ice) their knees, ankles and derrierres.

In addition to the loss of water service, the city is also dealing with water meter problems, including leaking, repairs needed and replacements required. 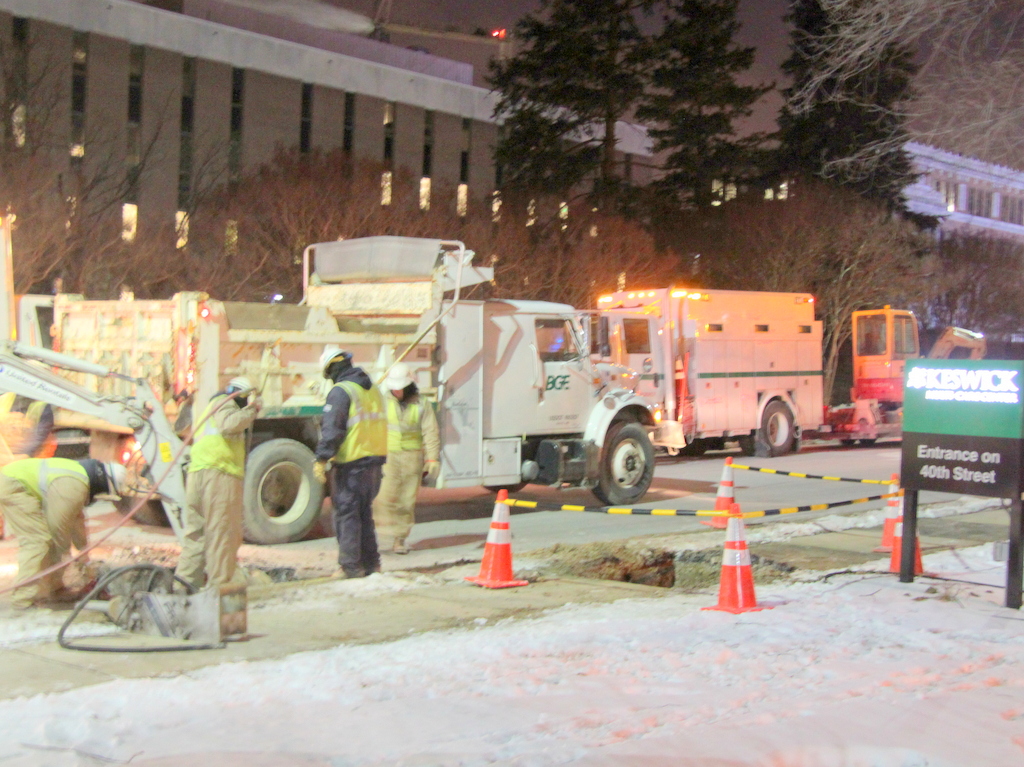 At the corner of 40th St. and Keswick Ave., a Baltimore Gas and Electric crew recently repaired a gas line they said had weather-related leaks. (Photo by Fern Shen)

DPW spokesman Jeffrey Raymond told The Brew earlier this week that about 1,800 water meter installation work orders have been created since February 18 alone.

Meanwhile, water main breaks continue to plague the city, though their numbers are fewer.

Today, Raymond said, the agency is addressing 10 active water main breaks (down from 30 on March 2). Six are being repaired  by contractors and four by DPW crews.

In addition to frozen pipes and  breaks, the agency, now with help from the Baltimore City Fire Department, is also handling hundreds of other service requests, including flooded basements.

“We are making calls for water in basements a priority,” Raymond said today.

Flooded basement concerns have increased because of a number of factors, Raymond said, including frozen sump pump outfalls and broken water lines in vacant houses.

Raymond didn’t have access to data on the number of vacants with leaks, but said “flooding as a result of pipes breaking inside vacant buildings, and either spilling into the street or neighboring properties, is a problem that we’ve had to address.”

In a city with 16,000 vacant buildings, and by some accounts many more, that could be quite a problem. 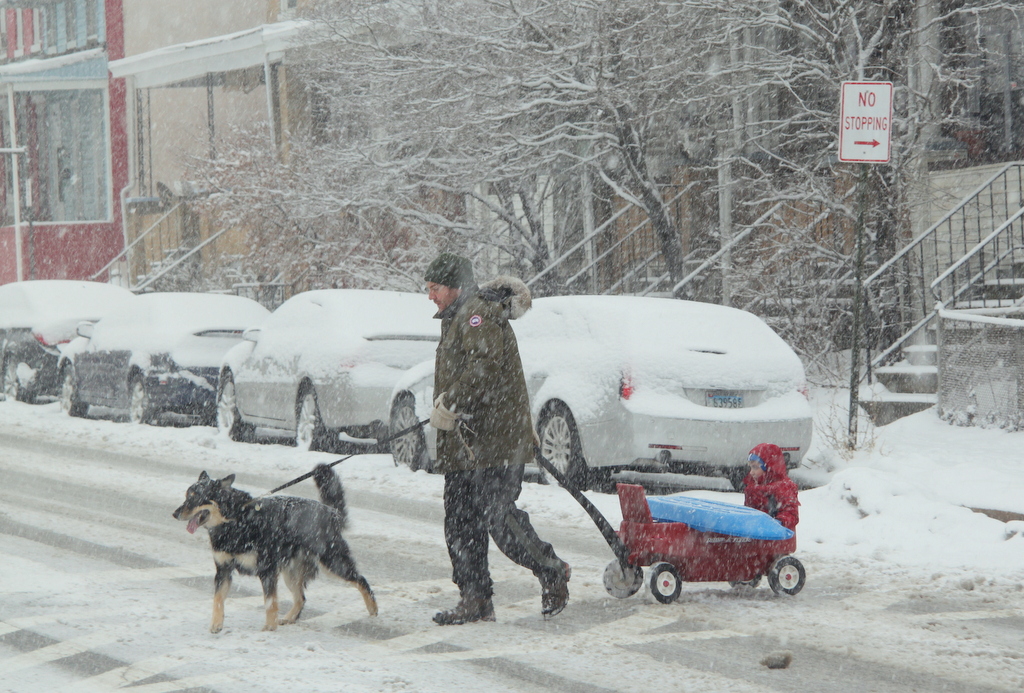 For this boy, man and dog, it was day for some sledding in the park. (Photo by Fern Shen)

For all the ice and freezing temperatures, though,this has not been a year for heavy snowfall in Baltimore.

Even so, according to Open Baltimore data, Baltimoreans have fallen down on the job in the snow removal department.

Between February 1 and March 5, the Environmental Control Board issued 291 citations to residents and businesses for not removing snow and ice.

By law, snow has to be removed within 3 hours after the end of a snow or ice event, unless the snow fall stops between 3 p.m. and 6 a.m., in which case snow must be removed by 11 a.m.

Snow removal scofflaws (viewable by address here) risk a fine of $50 for residential properties and $100 for commercial properties. 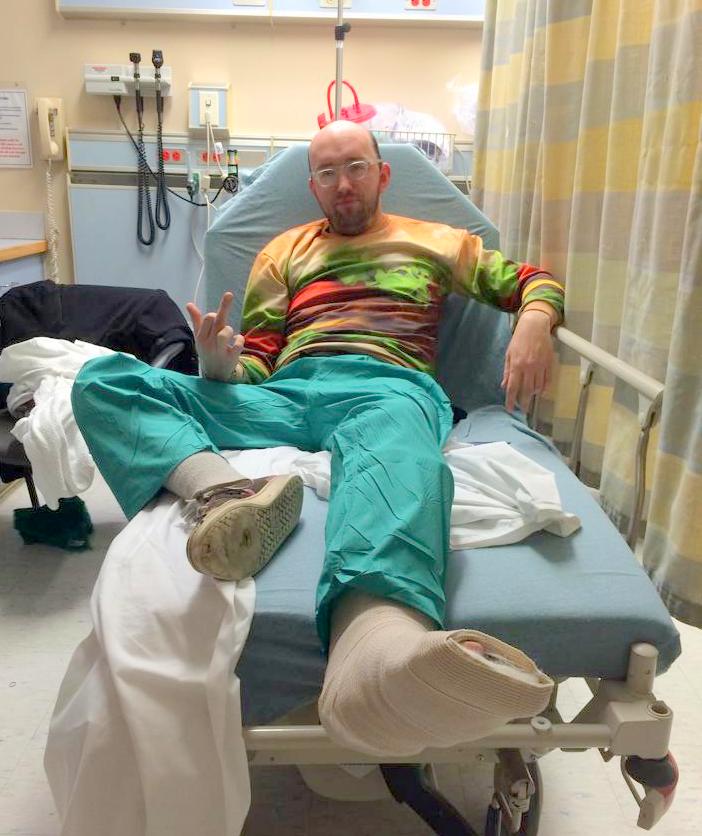 Nolen Strals in January after he slipped and fell on an unshoveled sidewalk in Old Goucher, breaking his ankle in two places. (Strals’ Facebook photo)

And the control board doesn’t seem to be cutting residents or businesses any slack.

The consequences of treacherously snowy sidewalks have been graphically illustrated by graphic designer Nolen Strals, who broke his ankle in two places on January 7 after falling on an Old Goucher sidewalk.

Those who follow the Hampden resident on Facebook have seen the pictures of Strals at the hospital, of the red and angry surgical scar on his foot, and of him scooting around the supermarket on a motorized scooter.

They have also gotten the all-caps message he wants fellow residents and business owners in Baltimore to get loud and clear: “Shovel your damn sidewalk!”