With the news this week that the city plans to move traffic faster along Aliceanna Street by restricting rush-hour parking there, one aspect that has angered critics is the fact there has been no public input on the imminent change.

Councilman James B. Kraft, who dropped the bombshell to the Fells Point Community Organization Tuesday night, today gave an explanation why:

Because the Department of Transportation told him that it had made up its mind ahead of time, he said that holding community meetings would have been a waste of time and a charade.

“DOT said to me, ‘We usually have community meetings before we implement something like this,’” Kraft said, in an interview with The Brew.

“Be honest,” he continued. “People want government to be honest with them. Let them get angry. But be honest. Having meetings if the decision has already been made is a folly and not fair to anybody.”

Kraft said DOT officials told him the decision was made to mitigate traffic impacts in Southeast Baltimore, where vehicles back up from President Street to Boston Street during rush hour, resulting in bottlenecks that delay commuters and residents.

Known About Plan for 6 Months

Kraft said he warned DOT that he intended to announce the restrictions at a community meeting, knowing that they would ignite a firestorm. (Under the plan, parking on the south side of Aliceanna Street from Harbor East to Boston Street will no longer be allowed from 4-7 p.m. on weekdays.)

The councilman said he’s known about the possible change for about six months, but DOT had been discussing the matter for a lot longer. A veteran of years of parking disputes in his fast-growing waterfront district, Kraft said there is no other solution.

“It appears to be the best decision at this point in time,” he said. “Aliceanna Street was the most logical choice because that’s where traffic flows.”

Regarding any alternatives to or reconsiderations of the plan, Kraft said this morning: “Here’s where we stand now. I said to DOT this morning, if you have alternatives, have community meetings. But no alternatives and the decision has been made. Don’t bother.”

After The Brew broke the story yesterday, advocates for more bicycle and pedestrian-friendly infrastructure blasted the plan. 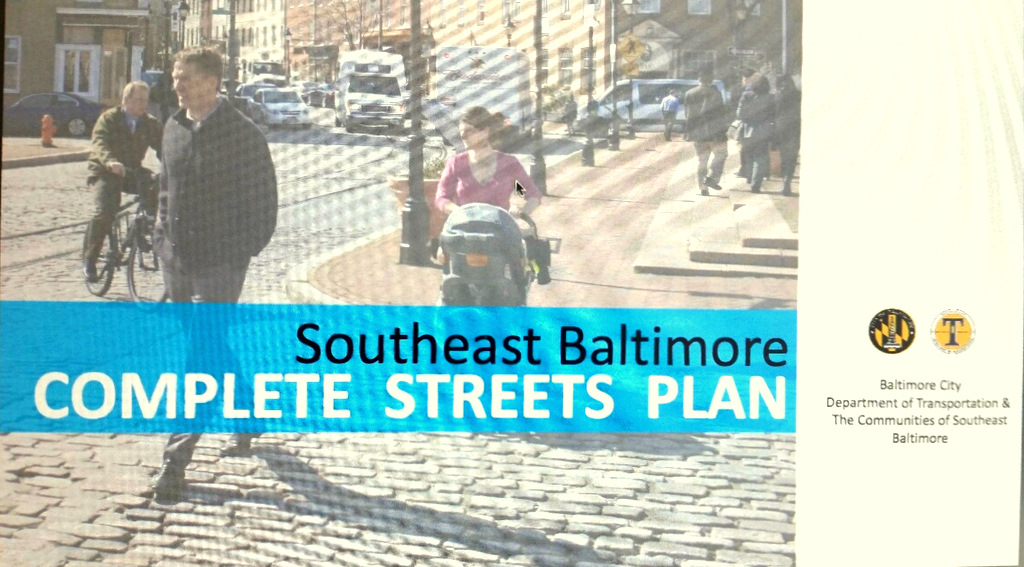 Cover of the 65-page report that described ways to discourage cars and make Southeast Baltimore streets more accessible to bicyclists and pedestrians.

Jed Weeks, of the advocacy group Bikemore, called it a step backward and said it goes against the “Southeast Complete  Streets” plan that was published by the city in 2012.

Not only did the plan designate Aliceanna Street as a major bike route between downtown and Canton, but earmarked the street as a “traffic calming corridor” and “urban greenway” where landscaping, trees and traffic calming measures would discourage cars and enhance use by pedestrians and cyclists.

The alternatives include building the Red Line, improving bus service and making streets more pedestrian and bicycle friendly, he said, adding that the city’s Aliceanna plan is a sign that “they’re doing the opposite and building to induce more demand for cars.”

Mark Dziubek-Brown‏, a former DOT transportation planner, posted his disappointment on Twitter yesterday, and linked to the 2012 complete streets plan, calling out the DOT.

“This goes against the plan I helped draft,” Brown said.

Asked about the Complete Streets plan, Kraft told The Brew that he has to look at it again before he could comment. “But there’s nothing to say that we can’t move the bike route to another street,” he added.

____________________________________________
UPDATE: Late today, Councilman Kraft posted this on the Canton Neighbors Facebook page: “All, We have just been updated by DOT that a community meeting will be held regarding the Aliceanna Street peak hour restrictions on DOT will be sending out a notification with complete details shortly. DOT has informed us that no final decision will be made until after the community has had an opportunity to speak and DOT has had time to consider their concerns.”

Nancy Longo, whose restaurant, Pierpoint, has been on the 1800 block of Aliceanna for 26 years, was livid. She has been remodeling the restaurant and is now questioning her decision in light of the proposed parking restrictions.

“I’m really angry and feel like I’m not going to want to make any more investments in being here, now that I see this,” she said.

“This is despicable. I called Councilman Kraft’s office to tell him so! I’m really angry. I haven’t spent all this money to renovate my restaurant to now have this happen!”

Longo said the lack of parking will hurt her business by inconveniencing her staff and most of all her early diners.

“Not all of my customers are 30 years old and can walk here,” she said. “A lot of them are in their 50s or older and they expect to drive here and expect to be able to park. . . I am clueless as to why the city would do this. I really do feel like this was handled horribly,” she said.

No Response from DOT

DOT has yet to respond to The Brew. The agency’s public information staff acknowledged our questions and said they would respond by today.

Kraft’s chief of staff told The Brew that his office is also waiting to hear from DOT about how many parking spaces will be impacted by the rush-hour restrictions, which are scheduled to go into effect on April 1.