A meeting in Sharp-Leadenhall ended in name calling and rancor last night after the developer of the $250-million Stadium Square project accused the president of a local community association of “lying” to him.

The dispute involved a request by Caves Valley Partners for a letter from the South Baltimore Partnership endorsing an exemption to a state law prohibiting the sale of liquor within 300 feet of a church or school.

Arsh Mirmiran told the group that the support letter must be submitted immediately so that the 46th District delegation could introduce a bill in Annapolis permitting the sale of liquor before the legislative session ends in April.

Caves Valley had disclosed plans on Wednesday to sell part of the three-block parcel it had assembled – and is currently demolishing – in Sharp-Leadenhall to a Texas company for a proposed 300-unit luxury apartment building with ground-floor retail space.

Mirmiran told residents last night that he wanted to lease the ground-floor space to a restaurant that would be within 300 feet of the historic Leadenhall Baptist Church.

When the group’s president, Betty Bland-Thomas, balked at Mirmiran’s call for an immediate vote on the endorsement letter, the developer accused her of wasting his time and not telling the truth.

“This is why I came to this meeting. It specifically says that on my calendar – liquor endorsement letter,” Mirmiran said, looking back and forth at Bland-Thomas and a stunned audience of 11 residents.

He continued, “I have a family with young kids who I am not seeing tonight because I came here instead. I don’t lie when I say I am going to do something. . . If you don’t want to have a restaurant, fine, then we can do something else. But I’m not coming back to you [the association] if I’m being lied to. I’m not arguing; I’m stating the facts.”

He faced the audience and added gravely: “I apologize that I was lied to and didn’t see my kids.”

Bland-Thomas said the group would take up the matter as part of its regular meeting process, and then protested what she called a personal attack by the developer. 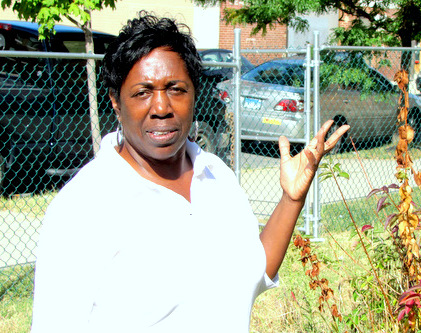 Betty Bland-Thomas at a vacant lot that was turned into a garden by the community on West Cross Street. (Photo by Mark Reutter)

“That was inappropriate behavior,” she said. “I was verbally abused, and I think we were being intimidated.”

Mirmiran did not back down.

He repeated after the meeting that there was no possible misunderstanding or lack of communication.

He showed a reporter emails that indicated that he had asked Bland-Thomas to help him with the liquor matter last month and had submitted a draft letter for the association to sign expressing their endorsement of the liquor law exemption.

Bland-Thomas said she was not necessarily opposed to the liquor exemption and welcomed a restaurant to the community. She said her group needed more information about Caves Valley’s plans, which is why she said she called last night’s meeting. 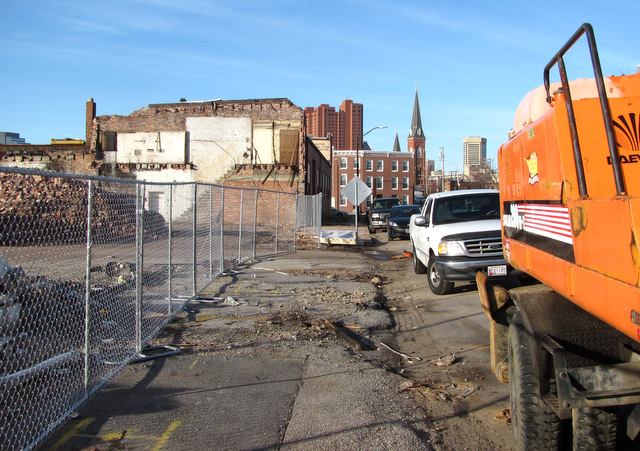 The former Baltimore Tool Co. is being razed at Race and West streets as part of a proposed complex of six-story apartments and a 450-space parking garage. (Photo by Mark Reutter)

“This project will have a huge impact on the community, and they seem to want to tell us about their plans at the last minute,” she said. “It’s all happening so fast. We are concerned that there have been so many buildings torn down in our community when there are no concrete plans about what they’re going to do and when they’re going to do it.”

“Don’t Want us to be Erased”

Mirmiran said that most of the project is still two years or more from undergoing construction. The luxury apartment complex by Houston-based Hanover Co. will be the first building on the site, and should get underway sooner, he said.

Several people at last night’s meeting worried about how the low-income community would fare over the years of construction – and whether higher rents stemming from the upscale project will drive current residents from their homes.

Mirmiran’s response: “I believe we will take Sharp-Leadenhall and make it a national story on how rehabilitation can be done.”

He and his partners, he said, are committed to help with establishing a community center featuring a jobs program and health screening and would not seek to displace a shelter for homeless veterans located across Leadenhall Street from their project.

“This is a wonderful project,” resident Taryn Ojekwe agreed, “but I don’t want us to be erased.”