File this one under the category of  “Underville” or “Armourmore” as our hometown sportswear giant pursues ever more development projects with city leaders’ blessings.

The company has also invested in local causes like a new field, scoreboard and lighting for Paul Laurence Dunbar High School.

So when Plank declares that he wants to make Baltimore “the coolest city in the world,” some observers have wondered if one of his unannounced aims is to make Charm City an extension of the Under Armour brand.

The latest demonstration of the company’s snugly relationship with City Hall comes through the notification (on page 14 of this week’s Board of Estimates agenda) that UA has donated – “unsolicited,” says the city – 1,596 pairs of its branded boots to the Baltimore Fire Department. 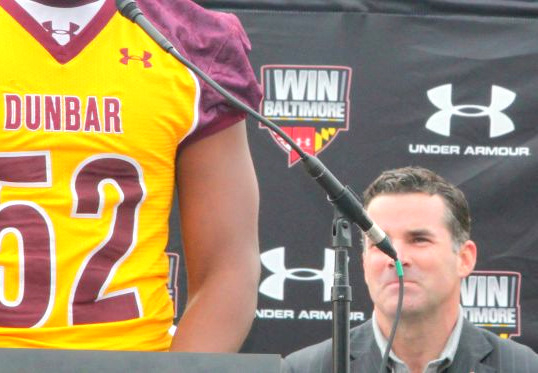 Scott Plank sits at a ceremony that honored the company’s donation of a synthetic-turf football field to Dunbar High School. (Photo by Fern Shen)

The boots feature trademarked technology that “wraps a user’s ankle with a lightweight second skin” as well as micro-foam that “turns cushioned landings into explosive takeoffs,” according to the company’s ad literature.

Female firefighters, however, may be out of luck. Noted in the agenda is this fact – the Under Armour donation consists only of men’s tactical boots (which women, of course, are free to wear).

The transaction is set to be approved at tomorrow’s board meeting led by Mayor Stephanie Rawlings-Blake and City Council President Bernard C. “Jack” Young.

Their approval is needed to exempt the donation from Article 8, Section 6-26, of the Baltimore City Code, which prohibits soliciting (or facilitating the solicitation of) a gift by a government agency or official.

City ethics rules allow private donations for the benefit of a government program or activity as long as the donations are sanctioned by the Board of Estimates.

Thus, tomorrow’s “request to approve the acceptance of the donation,” which UA estimates to be worth $191,504.04. 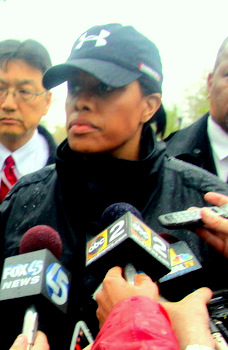 The shoe donation comes on the heels of Under Armour’s gift of free uniforms for the police department in January.

The details of this transaction have not yet been publicly disclosed except that they involve outfitting members from one police district with UA’s line of tactical wear.

In praising the uniform donation (which helps relieve the police department’s budget faced with unexpected overtime costs at the Horseshoe Casino), Mayor Rawlings-Blake said Under Armour is simply being a good corporate citizen.

The donation, she said, wouldn’t give the company an inside track on future police uniforms, if it decides to bid on those contracts.

For years, such uniforms have been manufactured by two local companies, the Howard Uniform Co. and F & F and A. Jacobs & Sons.

Last November, the spending board approved $590,000 – split between the two garment makers – for police uniforms in 2015.

In addition, the city allocates on average of $650,000 a year for firefighter uniforms. F & F and A. Jacobs has been the exclusive supplier since 2011.

In terms of UA’s latest donation, the springy, lightweight Valsetz RTS Tactical Boots are most likely to be worn by Emergency Medical Services (EMS) personnel on their rounds as well as firefighters in the station house.

When out fighting fires, according to Fire Officers Local 964 President Michael Campbell, city personnel will continue to don their heavy rubber turnout boots per departmental regulations.