The restaurant grading bill, which went down in flames last night in the City Council, was about the mildest measure of “reform” one could imagine.

Basically, the bill would require most places that serve food to the public to post the results of their health department inspection compliance ratings.

Right now, consumers have no way of knowing how well or poorly restaurants do on their inspections. If they get shut down, the health department posts the information, but only once a month. If a restaurant gets a middling or poor rating but remains open, nobody is the wiser.

The proposed bill would require restaurants to disclose their rating as “excellent,” “good” or “fair” in a conspicuous location, and the health department would post the results online in a searchable form.

It’s something that’s been done in cities around the country and has been part of Anne Arundel County’s food inspection services for years.

Innocuous except to the restaurant industry that, having won various amendments that watered down the bill, decided what it really wanted was no bill at all.

Enter the City Council and its ever-waffling ways.

What happened? Most visibly, restaurant owners peeled off enough votes to throttle the bill.

Of the three who switched sides – Eric Costello, James B. Kraft and William “Pete” Welch – Costello had offered an amendment to permit restaurants with a less than “excellent” rating to get a re-inspection to improve their grade.

As a member of the health committee handling the legislation, Costello had plenty of time to offer amendments in a timely manner. The rejection of his last-minute revision gave him enough cover to vote against the bill. (He issued a terse “no comment” as he exited the Council chambers.) 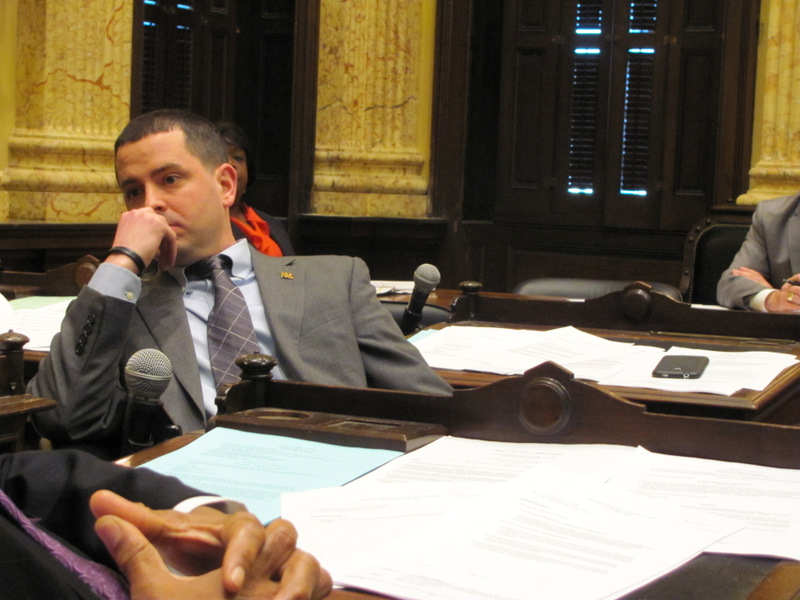 Eric Costello casts a contemplative look before voting against the restaurant bill. In the foreground, the folded hands of Councilman Pete Welch. (Photo by Mark Reutter)

Kraft, meanwhile, cheerfully admitted that he had been “hearing from restaurants” and had decided to “err” in their favor because he did not want to “put anyone out of business” because the health department couldn’t do re-inspections in time. (Kraft was referencing Costello’s amendment calling for a re-do of a facility that did not earn an “excellent” rating the first time around.)

Welch, who deprived the bill of its 8th vote by voting “pass,” voiced his concern that health inspectors might not “like” a restaurant owner and thus hand out a poor rating.

He had repeatedly pointed out that the measure was a “transparency bill” that would have no impact on current health regulations and would not burden restaurant owners with more inspections or costs.

The bill had languished for nearly three years in the Council’s health committee thanks to Welch, who was a “no show” at bill-drafting sessions, and Helen Holton, who insisted that she was not against the bill but in favor of “doing legislation that makes sense.”

Blocked from getting a vote in committee, Scott and panel chairman Robert W. Curran took the unusual step of bringing the measure before the full Council two weeks ago.

“They didn’t expect us to get this far,” said Sharon Green Middleton, another bill supporter, referring to the Restaurant Association of Maryland and other lobbyists. (Read how they tried to chop up the bill last November.)

But that step earned the enmity of Council President Bernard C. “Jack” Young, who complained that the bill’s advocates were “circumventing” the committee system that he controls.

The Power of Political Loyalty

Young’s opposition to the measure was as big a factor as angry restaurant owners in securing the “no” votes of such allies as Carl Stokes, Ed Reisinger and (most probably) Costello, who owes his 11th District appointment to Young’s support.

For Scott, trying to do something in a Council that has distinguished itself by doing  precious little since it was elected in 2011 was an exercise in frustration. He said he was “very, very angry” with some of his colleagues, though he’ll get over it.

Note: All 15 Council members were listed as “sponsors” of the bill.