The Baltimore City Council voted down a bill tonight that would potentially give it more power to override a mayoral veto.

Bill 12-0111 would allow voters to decide whether to amend the city charter to allow two-thirds of the City Council to override a mayoral veto, compared to the present requirement of a three-quarters favorable vote.

The bill was introduced 2½ years ago by Councilman Bill Henry, but was stalled by the opposition of Mayor Stephanie Rawlings-Blake and her Council allies. It was voted out of the Judiciary Committee last week by a 3-1-1 vote.

Committee chairman James B. Kraft noted tonight that all 50 states and 23 of the nation’s 25 largest cities require a two-thirds or less majority to override an executive veto. 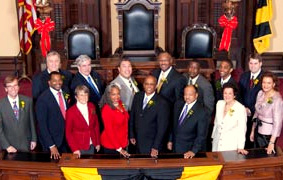 Tonight’s bill would not change the veto threshold by itself, Kraft pointed out.

“All it does is it says, we the City Council send this to the voters of the City of Baltimore, asking them to decide what number they would like it to be – three-quarters, [which] less than 5% of the jurisdictions in the country [require], or two-thirds, with 95%.”

By voice vote (with no roll call taken), the Council decided to keep Baltimore among the 5%, which virtually guarantees that any mayoral veto – such as the recent vetoes by Rawlings-Blake of the police body camera and plastic bag bills – cannot be overridden.

The three “yes” votes in the Judiciary Committee were by Kraft, Bill Henry and Mary Pat Clarke, and the “no” vote by Robert Curran. An ailing Warren Branch was absent at the committee vote and tonight’s meeting.