Baltimore County Executive Kevin Kamenetz issued a press release yesterday that included – at the very end of 2,278 words about water and sewer improvements – this news: water rates for county residents will be hiked for the first time since 2010.

The actual percentage increase was not cited in the release, but it will be 15% based on the “1,000 cubic feet of water consumption” and “water distribution charge” cited in the final section of the release.

The sketchy information about the rate hike was emailed at 2:23 p.m. on one of the quietest news days of the year, Good Friday.

The release, titled “County to Upgrade Aging Water and Sewer Pipes,” offers a detailed history of the Metropolitan Water District and the problems of aging infrastructure, but gives no hint of the rate hike until its final paragraphs (see full release).

The increase will pivot the price of water and sewer for an average Baltimore County household from $931.96 a year to $1,071.75 a year, according to data in this website updated by The Brew.

Even though Baltimore County and City are part of the same water district, comparing the two jurisdiction’s rates is difficult because they are calculated differently and appear on different forms. 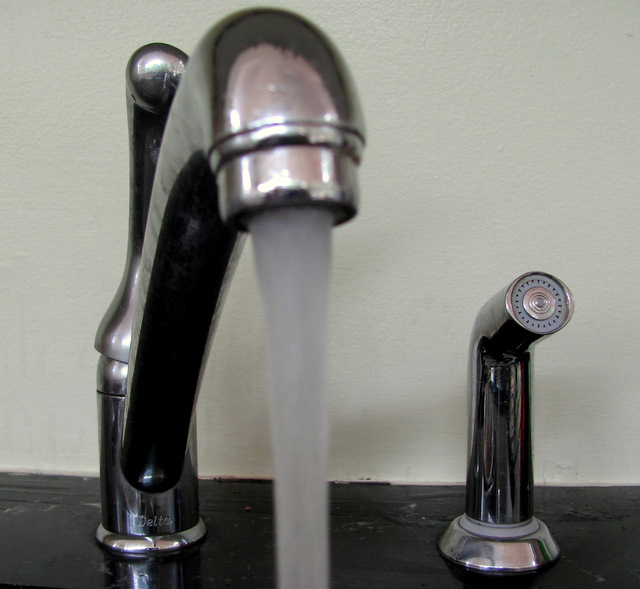 Water will be getting pricier in Baltimore County after July 1. (Photo by Mark Reutter)

City residents pay their water bills quarterly, while some of the water and sewer costs for County residents appear on their annual property tax bill.

What’s more, the two jurisdictions charge different prices for other fees, most notably the stormwater management fee – a.k.a. “rain tax” – mandated by the General Assembly in 2012.

County homeowners are assessed $39 a year for the “rain tax,” while City homeowners pay between $40 and $120 depending on the square footage of impervious surface on their property.

While avoiding comment on the rate increase, Kamenetz is quoted extensively in the release lauding his administration’s decision to increase its contribution to the Metropolitan District fund.

“We’ve got pipes that are 60 and 70 years old, and more than half of our pipes exceed their natural life span,” Kamenetz is quoted as saying. “The need for repairs to this aging infrastructure is not going away and we must continue to address it now.”

Water and sewer rates were not an issue during Kamenetz’s successful run for a second term last November.

He did not mention the need to raise water rates during the campaign, according to available records, but praised his “green” record as among the key accomplishments of his first term in office.
_____________________________

TEXT AT END OF BALTIMORE COUNTY MEDIA RELEASE THAT DISCLOSES THE NEW WATER AND SEWER RATES:

To pay for these upgrades the County will increase Metropolitan District fees effective July 1, 2015. The fees have not been increased since 2010.

This charge also appears on an individual’s property tax bill in July, and it is a flat annual charge based upon the meter size.
Current rate:  $98.11
New Rate:  $112.83

This charge is billed to individuals from Baltimore City, quarterly.
Current rate:  $14.55 per 1,000 cubic feet of water consumption
New Rate:  $16.73