Baltimore officials plan to disconnect water service to about 600 customers a week as they work through a backlog of 25,000 delinquent accounts.

Starting on Monday, meter technicians began turning off accounts that are at least six months in arrears and $250 past due, said Jeffrey Raymond, spokesman for the Department of Public Works. The average overdue bill, he said, is estimated to be between $500 and $600.

The city plans a regimen of 150 turn-offs a day, Monday through Thursday, or 600 accounts a week.

The shut-offs will take place by geographic zone, “so meter technicians don’t have to go too far between jobs.” Raymond declined to name the location of the first cutoffs or provide a breakdown of the number of residential versus business addresses.

About $15 million in unpaid bills comes from residential accounts. Another $15 million is owed by businesses, while non-profits and government agencies are responsible for $10 million more.

The Brew reported in 2012 that the company’s Sparrows Point steel mill owed the city $5.4 million. The company now owes $7 million with interest and penalties, but that amount is unlikely to be collected because the mill’s assets were liquidated in a bankruptcy sale.

In fact, Baltimore has been paying over $1.4 million a year to the current owners of the steel mill site to dispose of treated sewage from the Back River Wastewater Treatment Plant.

The Rawlings-Blake administration says the water crackdown – which resembles the water shut-offs tried in Detroit last year – is essential to pay for infrastructure improvements and federally-mandated upgrades.

Capital projects, including the nearly $300 million Enhanced Nutrient Removal Project at Back River, are financed by the sale of utility bonds secured by the anticipated stream of future water and sewer revenues.

The city has raised water rates by 42% since 2013, with the final 11% installment coming this July 1, and doubled the debt limit for utility bonds to $4.52 billion. Last week, Baltimore County disclosed a 15% increase in water and sewer rates, effective July 1.

And today, the Board of Estimates approved a $374,400 cost overrun to contractor Archer Western Contractors on the Back River nutrient removal project. Extra water orders have added $7 million to the construction project, which is paid from state grants as well as by city and county ratepayers.

So far, the pressure applied by the city has yielded some results. 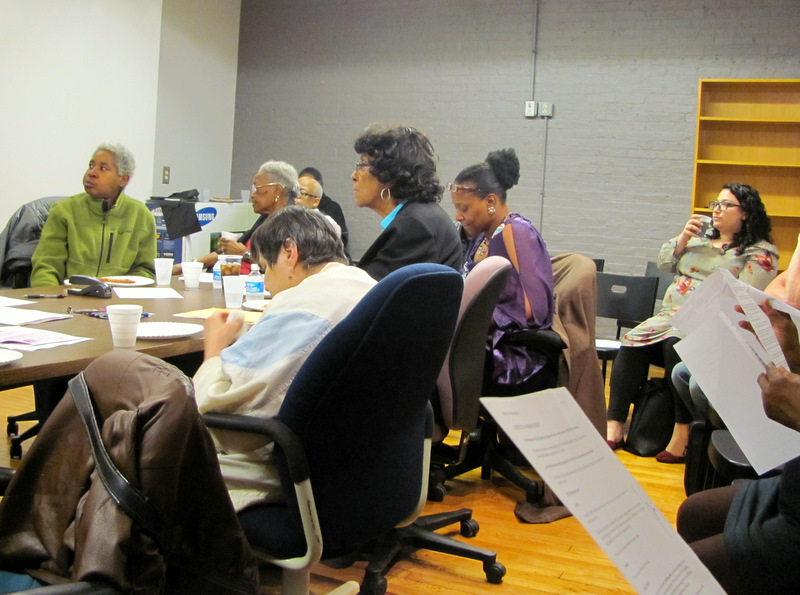 Members of the Baltimore Right to Housing Alliance last night discussed how the water shut-off will hurt low-income residents. (Photo by Mark Reutter)

DPW deputy director Dale Thompson said that nearly 1,500 tardy accounts have been paid since the mass mailing of delinquent notices, bringing about $1 million to city coffers.

Customers who find their water disconnected can reactivate service by paying the amount owed. There is no extra service charge, Raymond said.

But that avenue of water restoration assumes that the individual or family whose service is severed holds a water account.

Renters can be placed in a “precarious situation,” according to Matt Hill of the Public Justice Center, because they cannot obtain their own water accounts. DPW does not allow them to “challenge inaccurate billing practices or adjust for leaks because the accounts are not in their names,” Hill said in an interview yesterday.

Traditionally in Baltimore, water bills are paid by landlords. Tenants without water have the option of waiting for the landlord to pay the bill or paying the arrears themselves (the city will accept payments from any party).

Hill, an attorney who works with tenants, says the crackdown came as a surprise to his organization. “I can’t remember an actionable shut-off for non-payment. People got notices all the time, saying water would be shut off on a certain date, but nothing ever happened,” he said.

But property owners who didn’t pay their water bills weren’t off the hook. Anyone who owed $350 or more on a water account was subject to foreclosure, with their property subject to a tax sale by the city if outstanding fees were not paid.

It is unclear if properties now subject to water turn-offs will also be placed on the city’s tax sale rolls this year.

At a meeting last night, about 25 activists with the Right to Housing Alliance denounced the water disconnect program, citing an official at the United Nations who called Detroit’s water shutdown a violation of human rights.

“When there is genuine inability to pay, human rights simply forbids disconnections,” Catarina de Albuquerque, a special rapporteur at the U.N., said last year, echoing a welter of adverse reaction.

Following public demonstrations against the shut-offs, the program’s due process was challenged by the judge presiding over Detroit’s bankruptcy proceedings. Since then, water shut-offs have eased, and Detroit’s water department has been folded into a regional water management system.

Tony Simmons, lead organizer of Baltimore’s housing alliance, last night called for a moratorium on water shut-offs until an audit can be conducted on the water bureau, whose billing practices were heavily criticized as inaccurate and inflated three years ago.

“We’re going to be organizing and petitioning the City Council to stop this [process] until we have more information about what’s going on,” he said, noting that many residents lack confidence that their water bills are correct.

DPW is scheduled for a financial and performance audit this year. How much the outside auditor will look into the accuracy of the agency’s 400,000 water accounts has not been disclosed.

Past Errors no Longer an Issue

Rudy Chow, director of DPW, says the billing problems – and especially the practice of estimating quarterly bills – have been corrected, and errors have dropped to a record low.

The department is beginning a roughly $100 million program to install “smart” water meters to city and county customers ($83.5 million for installing the meters and the rest for a new customer billing system and for consultant review and inspection services).

Customers who cannot pay their water bills – or have a qualifying medical issue or have filed for bankruptcy – should call 410 396-5398 during business hours. “It’s up to the customer’s doctor to provide written notice of the serious medical condition,” Raymond added.

There are several programs available for low-income residents and needy seniors, including a onetime credit of $161 on water bills. There are “at least 250 customers” who have requested account reviews within the last two weeks, Raymond said, which removes them from immediate water suspension.

The city has also a “hardship exemption” for two fees recently added onto residential water bills – a Bay Restoration Fee and a Maryland Stormwater Fee (a.k.a., “the rain tax”).

To qualify, residents must apply and submit documentation of their low-income status.