“I don’t know how you address that,” said Larry Silverstein, a member of the Board of Finance, shortly before the panel approved $58 million in TIF tax subsidies for a West Baltimore housing project that city officials concede is highly problematic – and might never get built.

Silverstein’s lingering concerns notwithstanding, Monday’s decision to give a go-ahead for the issuance of city bonds to help underwrite the project was a foregone conclusion.

Mayor Stephanie Rawlings-Blake has signaled her approval of the tax incentives for La Cité Development to start its proposed $450 million rebuild of the blighted Poppleton neighborhood near the University of Maryland’s BioPark.

Three weeks ago, the plan hit a snag when the absence of one member of the board – combined with a “no” vote by Silverstein and an abstention by Comptroller Joan M. Pratt – resulted in the TIF legislation not winning approval.

Board clerk (and deputy finance director) Steve Kraus called for Monday’s special meeting to revisit that vote. Showing up was the previously-missing board member, Frederick W. Meier Jr., who voted “yes” in a new vote.

Also voting to approve were Comptroller Pratt, Finance Director Henry Raymond representing the mayor, and Dana Moulden, leaving Silverstein as the only dissenter. (This time he abstained.)

Approval came only after the panel worked through 40 minutes of questions and expressions of guarded optimism and gnawing doubts about the feasibility of the project that has been stalled since 2005 and is scheduled to take another 15-to-20 years to complete.

From the start, everyone in the hearing room said they want the project to succeed.

Deputy Housing Commissioner Peter Engle echoed that sentiment, saying the city has the opportunity for “place setting” or putting a new brand on a whole community.

But with every word of optimism also came concessions by Engle and others that New York-based La Cité, which has mostly done luxury hotel and small urban projects, is untested in the world of large-scale construction and has had a hard time lining up financing. 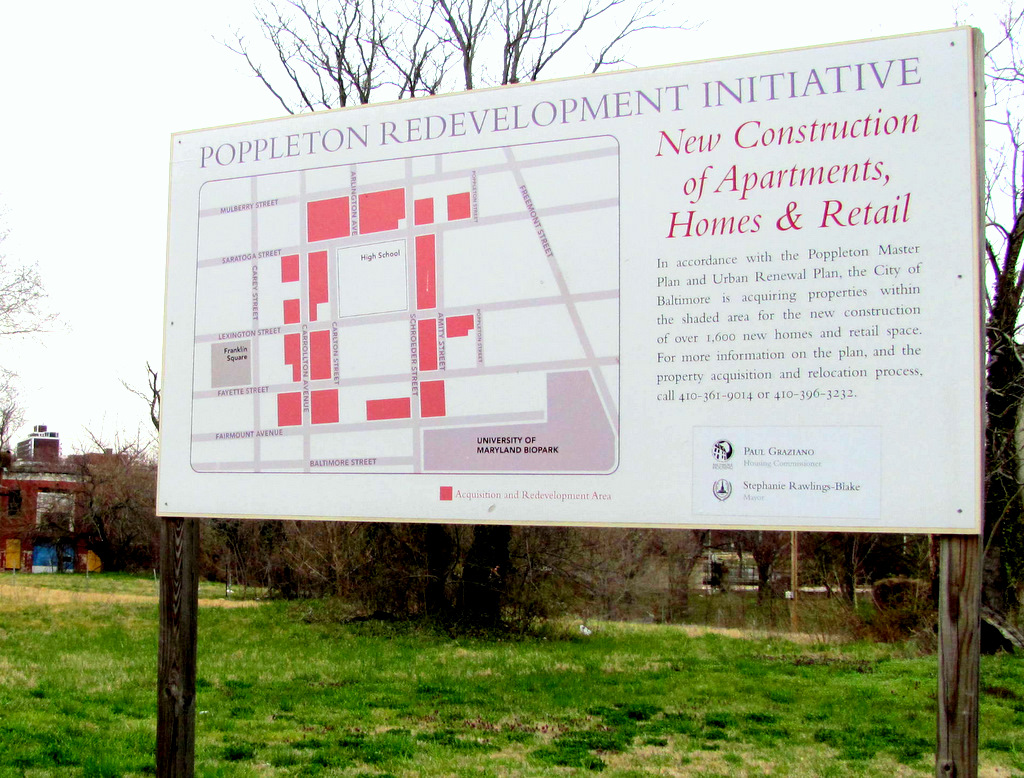 PROMISE AND REALITY: A sign announced a transformed Poppleton on Carrollton Avenue three years ago as (below) city-owned vacants sit half a block away. (Mark Reutter) 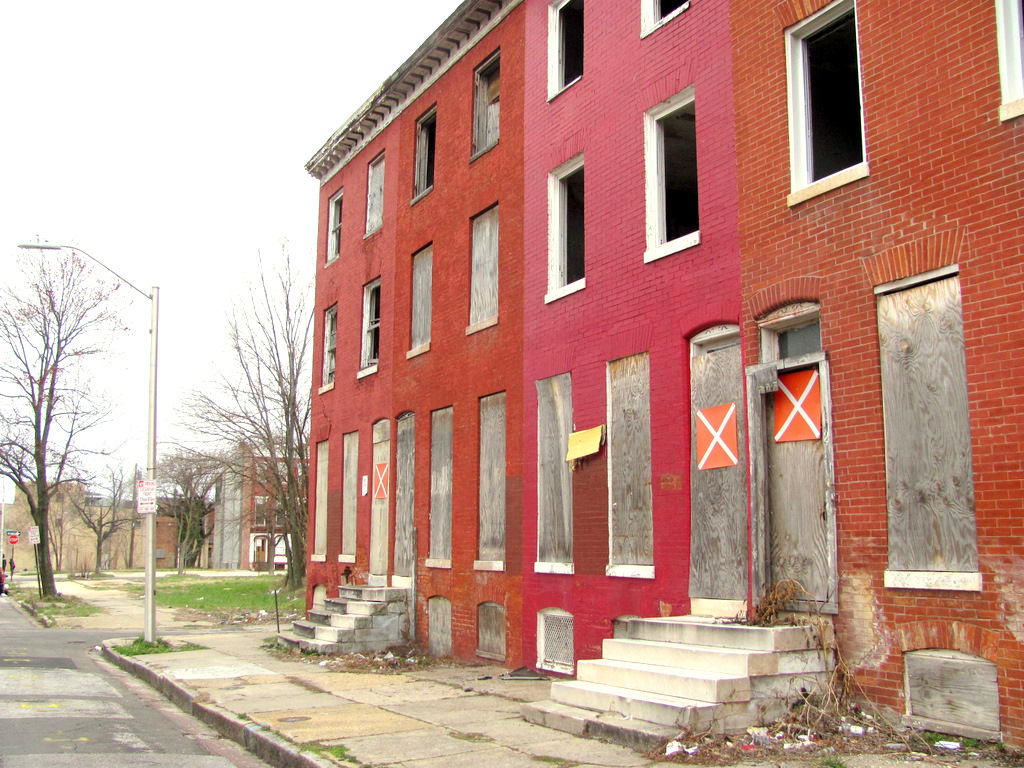 “If these guys can make it work, great. If not, we need to go on and find someone else,” Engle responded.

In fact, the city has tried to hand it over to other developers.

In 2012, the housing department attempted to back out of its developer’s agreement with La Cité. This sparked a legal battle that resulted in both sides warily returning to the negotiating table to devise the current plan (known as “Center/West Poppleton Phase 1A”) to construct two mid-rise apartments.

La Cité has arranged for $46 million in 4% low-income housing tax credits from the State of Maryland. With $12.25 million in first-phase TIF funds and $15 million of its own capital, La Cité proposes to build 257 rental units on vacant lots flanking West Lexington Street at Schroeder.

The city would sell the land to La Cité at the discounted price of $1.50 a square foot (compared to the market rate of $14 square feet) so long as one-fifth of the units are affordable to households earning less than 50% of the area median income.

Noting that the land sale amounts to a large subsidy to La Cite, Silverstein, a local commercial developer, questioned the city’s vague explanation of using TIF bond proceeds for public sidewalks, curbs and other infrastructure.

He described the data presented to the board as “copy-and-paste” costs repeated through the document, and asked when the panel would get the “real costs” of the city’s share of the project.

There are expenditures, he added, slated to be shouldered by the city that don’t appear to be public improvements. “Grading and retaining walls – that’s part of the building” and should be paid by the developer, he said

Keenan Rice, the city’s financial consultant, said detailed costs and engineering will be conducted in the future.

“At this stage we can say these are reasonable estimates that reflect public costs,” he responded. “But there will be a very thorough legal analysis done, and a legal opinion provided, that ensures that only public costs are being funded.”

Such due diligence, he added, will take place before the Poppleton TIF bonds are issued. 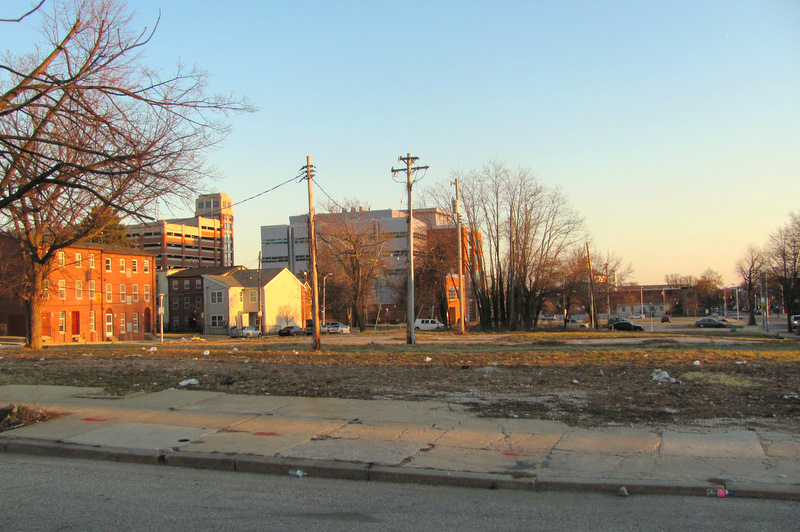 Proposed site of Phase 1A’s mid-rise apartment building on a vacant lot on West Lexington Street. In the distance are the freshly-minted buildings of University of Maryland’s BioPark. (Mark Reutter)

The other 205 apartments proposed for Phase 1A will be leased at market rates.

With one-bedroom units expected to be rented at $1,485 a month. Silverstein said the rates “seem out of whack” given the neighborhood.

Engle countered that the city considers the rents to be reasonable since La Cité proposes a pool, fitness center, outdoor decks, large rooms and other amenities for the complex.

“My biggest problem with this project is that it’s huge,” Silverstein continued. “It’s very complicated. It’s the most difficult type of project to do in the city. And it’s in a neighborhood that’s really challenged.”

Doubly concerning to Silverstein is having the project in the hands of a single developer for the next 20 years.

“You end up with this developer controlling the fate of this neighborhood. And it moves at the developer’s pace. And that’s economic, that’s internal to the developer [who] has almost no experience in this type of project.”

In previous TIFs approved for Harbor Point and Under Armour, the city put its faith in the track record of the sponsors, Silverstein noted.

“Here it’s not so obvious,” he said. While La Cité has named a more experienced co-developer, Diversified Realty Advisors, “I don’t know if it’s window dressing or a true partnership.”

Kraus said the city was well aware of this problem, which is why it has divided up the project into phases and is trying “to do it piece by piece.”

According to Engle, La Cité will be required to reach certain goals within certain time frames – for example, start Phase 1B within two years of the completion of Phase 1A.

“We have a 15-20 year project coming from a company that hasn’t shown a capacity to do this,” Silverstein countered.

Board member Meier said the Poppleton project reminds him of the tear down of the neighborhoods north and east of the Johns Hopkins Medical Complex.

That project has resulted in blocks of empty lots, with spotty patches of new housing.

“But the good thing is we ended up with a school,” Meier exclaimed, referring to the Henderson-Hopkins K-8 school on Ashland Avenue, the first public school built in East Baltimore in more than 20 years.

The Poppleton project was conceived during Mayor Martin O’Malley’s administration when mega-projects – in East Baltimore, in Oldtown, on the West Side, and in the Howard Street retail district (“Superblock”) – were in vogue.

Hundreds of private buildings were acquired by the city in anticipation of sleek apartment buildings, big-box retail stores and high-end office space.

All of the projects remain incomplete. Oldtown, for example, has scarcely gotten off the ground after numerous false starts involved a proposed grocery store and new housing.

Superblock has failed to move forward for more than a decade. Many of the vacant buildings on Howard and Lexington streets have suffered serious deterioration, as attorneys for the city and its once-favored developer, Lexington Square Partners, squabble in court.

“You Have to Have Trust”

The Poppleton project consists of about 16 blocks of mostly leveled land. About 70 private properties, some still inhabited, need to be acquired by the housing department.

The buildings will be demolished and the land sold to La Cité, with the $58 million in TIF bond proceeds used to rebuild the public infrastructure, including new open spaces. 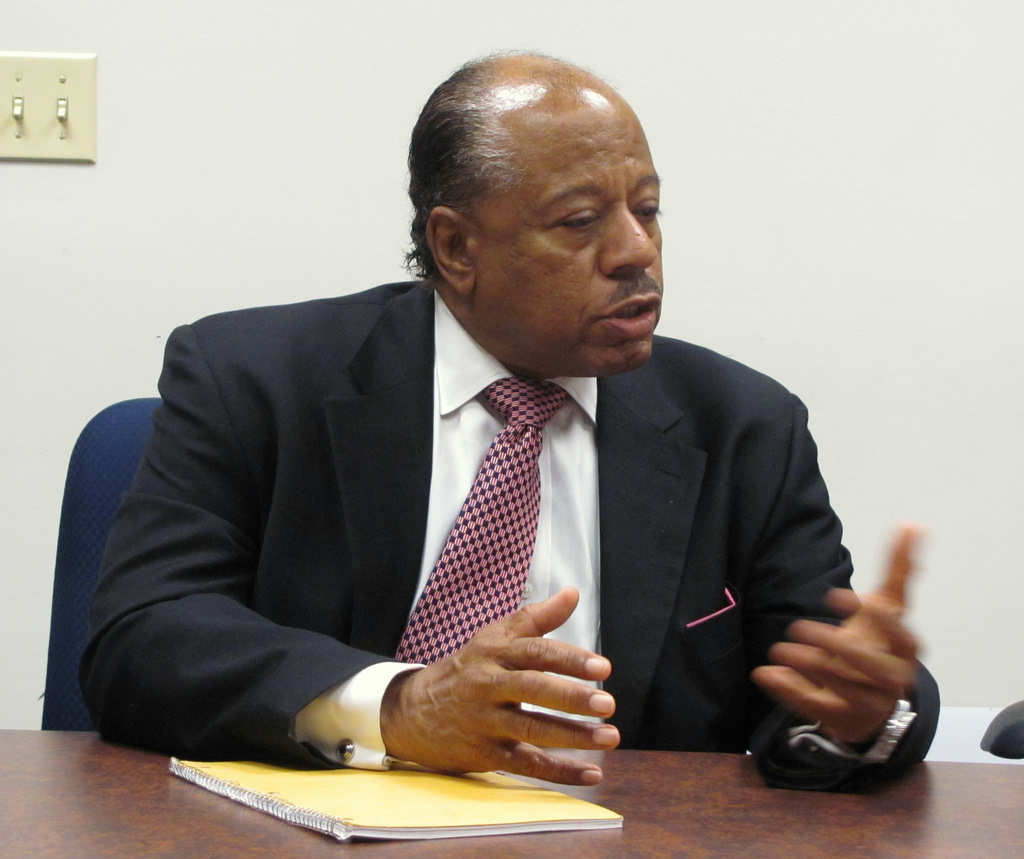 “It’s a challenge. I don’t deny that,” Engle said Monday, “but there’s strength here to build on,” citing the nearby presence of the University of Maryland Medical Center and what he described as the general revival of the West Side commercial district.

Asked by board member Moulden if he is concerned that the neighborhood might become gentrified, Engle said that is a “real problem” in Washington D.C. and several other cities, but not in Baltimore.

Asked for his closing thoughts on the project, Councilman Welch said:

“It’s an exciting time. It’s a project that we’ve been looking at for 10 years. And when we get to the point of looking at shovels in the ground, we have the same concerns that you have on gentrification because there are people in the area that are a little nervous.

“But we have stable partners in that neighborhood who will make sure that is not an issue. . . You have to have trust if things are to move quickly, and that’s what we’re trying to do. We’re trying to keep conflict to a bare-bones minimum.”